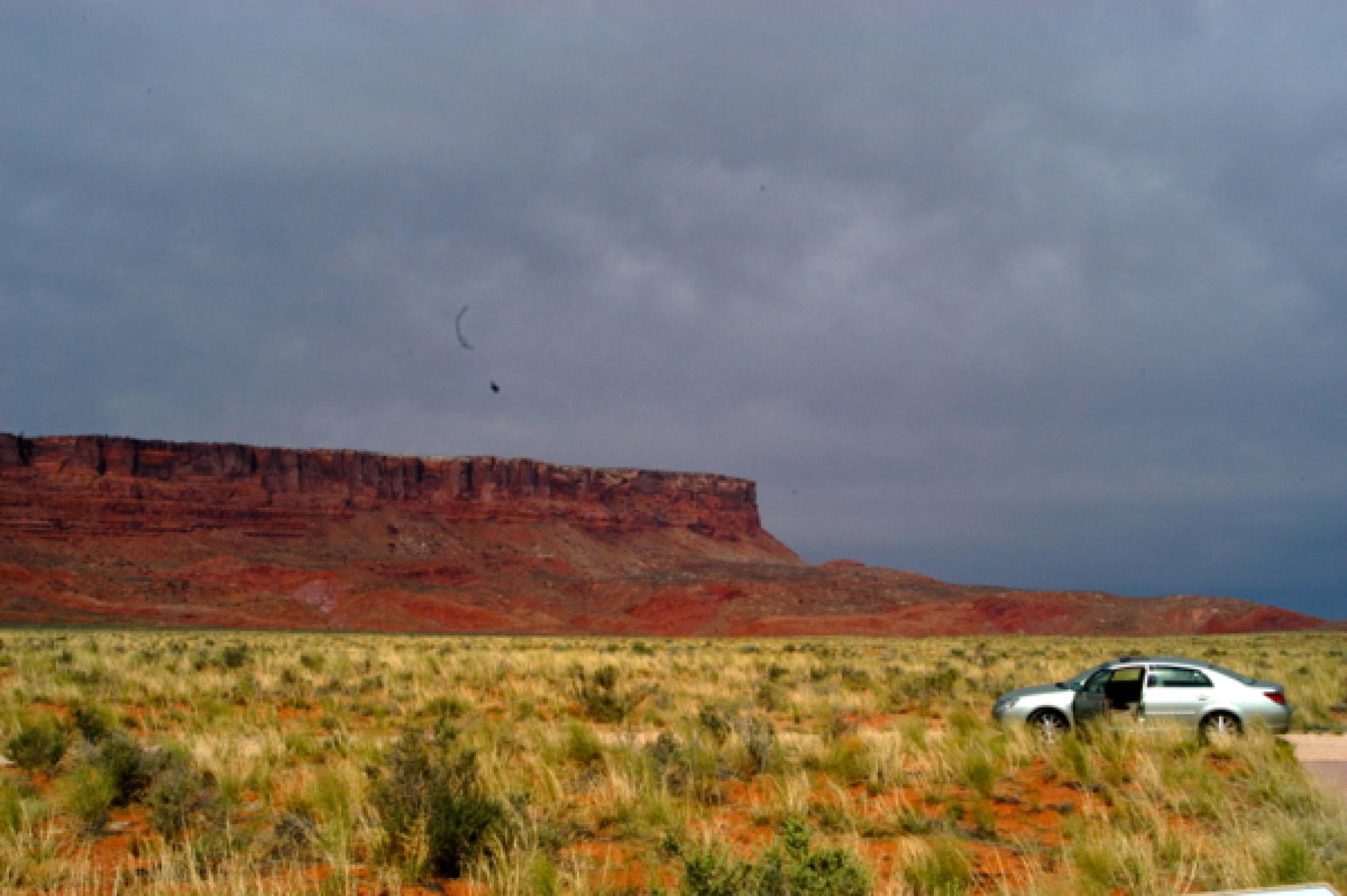 With limited time, Mike stops his car briefly in front of the Vermillion Cliffs in Arizona.
By  Mike Land

Mike discovers that travel is about the people, not the tourist destinations.

When, on my 51st day of the road trip, I finally hit Los Angeles, I make sure my first steps out of the car are at the J. Paul Getty Museum, perched alluringly atop a hill looking over downtown. I ride the tram upward to the grounds and take a half hour to stroll the overlooks, soaking in the bright white buildings and the colourful gardens filled with folks enjoying a pleasant Sunday afternoon. I imagine that even the tourists are spending a week in this one city, while the locals are simply taking a break from their routine lives here in this city. For them, this is a magical afternoon from the tedium of the workweek.

Me, I’ve just driven more than 2,400 kilometres in 98 hours. And even now I have to keep pushing: I have a little more than an hour before the Getty closes, so I’d best see at least one exhibit before I evacuate the premises.

As usual, I choose photography. I walk in to discover two wilderness-related exhibits, one featuring Hiroshi Sugimoto, the other Ansel Adams. Even though I’ve studied Adams’ Western landscapes in the past in other museums, I strive to linger over the familiar images, all rendered in black and white.  The moon rising over the New Mexican village, Half Dome at Yosemite, the angular Mt. Williamson with the foreground of boulders. My reverence competes with a desire to laugh out loud.

After all, I feel as if I’m spending almost as much time studying these photos than I did experiencing nature firsthand. Since Wednesday afternoon, I’ve zipped by scores of scenic locales, each of which Ansel Adams might spend days traipsing through, sizing up and meticulously photographing. Sure, the list from the last four days is impressive: Dawn on the South Rim of the Grand Canyon and the beginnings of twilight on the north, a raft ride down the Colorado River and a walk across said canyon on the Navajo Bridge, the intense nature-created colors of the Vermillion Cliffs and Bryce Canyon. Plus, as a bonus, the luminous spectacle of Las Vegas on a Saturday night (I was scared to get out of the car), and Hollywood Boulevard on a Sunday night (yes, there I did get out of the car).

It was total sensory overload, the kind of crazy driving achievement that makes you feel proud to the point of boastful in your 20s—and yet kind of like an idiot in your 50s. Really, shouldn’t I have outgrown this kind of thing by now? This need to cram as much as possible into a tight time frame, instead of settling in one place and drinking it in deeply?

Aware of this, I had originally allotted myself two nights in a cabin near the North Rim of the Grand Canyon, with room on the backside to wander the striking national parks in Utah. But then my community service mission was beset by good fortune: Tucson demanded I linger to attend church and serve breakfast for the homeless at Southside Presbyterian, which had just given a man and his family sanctuary to prevent his deportation. And while there I also needed to meet with a representative of No More Deaths, which, among other things, hikes the trails the immigrants take over the border, leaving them water to prevent them from dying in the desert, calling Border Patrol when they find someone on the brink of death. So, after months of fantasizing about it, goodbye, my writing cabin in Jacob Lake and its leisurely hikes through the Ponderosa pines.

As for the Utah quartet of Bryce, Zion and Arches, I would up settling for 90 minutes at Bryce, less than the time it took to drive there. This happened because I heard about Best Friends, the largest no-kill animal shelter in the United States, the subject of National Geographic television shows. By the time I finished touring, interviewing and volunteering, it was getting on late afternoon. I contemplated giving up on Bryce entirely, but it was so spectacular, I still felt less cheated than awed.

I transcended my discontent by telling myself this was just a scouting trip for slower-paced expeditions in the future, but at 56, I know this might or might not be true. But then I remembered what a friend, Jody Santos, said via Facebook about a week ago, back when I could sense what I was going to have to sacrifice to do the job right. Jody herself shoots documentaries for Visionaries, a series focused on people doing positive things for others in the Third World. Venturing to places as diverse as Africa, Asia, and Central America, as she focuses on interviewing, she’s far less likely to visit the same place twice.

“I always feel the tug of sightseeing versus work, knowing I may never return to these places,” she told me as I fretted in a Starbucks somewhere between El Paso and Tucson. “I tell myself I get to see the parts no one else sees—the human stories versus the tourist attractions.”

Those words certainly ring true as I stand at a railing at the Getty, watching children take their time tumbling in the grass as parents record them and their goofy laughter. In Tucson there was the brave immigrant family sleeping in a church that had embraced them to prevent an unjust deportation, as well as all the volunteers I served food beside the next day. On the South Rim at sunset, I talked to a volunteer ranger, doing three-and-a-half months enjoying not only the sweeping vistas but also the community: “I think people just feel good when they volunteer,” she told me as she kept an eye on the crowd. Two days later, a fellow raft rider told me how she and her husband went into the Peace Corps after retirement; I sat with them in their RV later, talking about places they’d volunteered while rambling the country and world for eight years.

Then, on Saturday, I first bonded with the dogs of Dogtown, then with one of the other volunteers, who spoke with remarkable openness about her long battle with chemical addiction, the five years of sobriety she’s carved out for herself—and the mutual vulnerability inherent in her sponsoring of four addicts, simultaneously, who aren’t as far along as herself, and who might call any time of day or night. When we finished talking, she gave me an effusive hug, as did her aunt, for whom a room at Best Friends is named.

The Canyons—Grand, Glen and Bryce—will be there long after my time on this earth is done, as well the places I didn’t get to see at all this time around. What is truly precious are these encounters, fleeting and ephemeral, with people—and in some cases dogs—I encountered because I was at the right hour on the right day at the right place. I can’t imagine this trip without them.

They were much deeper connections than the ones I share here at the Getty, although one fellow museum-goer does make a positive impact on my existence. I can’t help noticing his watch seems to be an hour slower than mine. When I ask, he confirms my hopes; I’d forgotten to adjust my watch for the time zone change on the road last night. I just doubled my time at the Getty.

I circle the fountain, climb past the tumbling children, and stretch out on the lawn, determined, for once, to take my time.