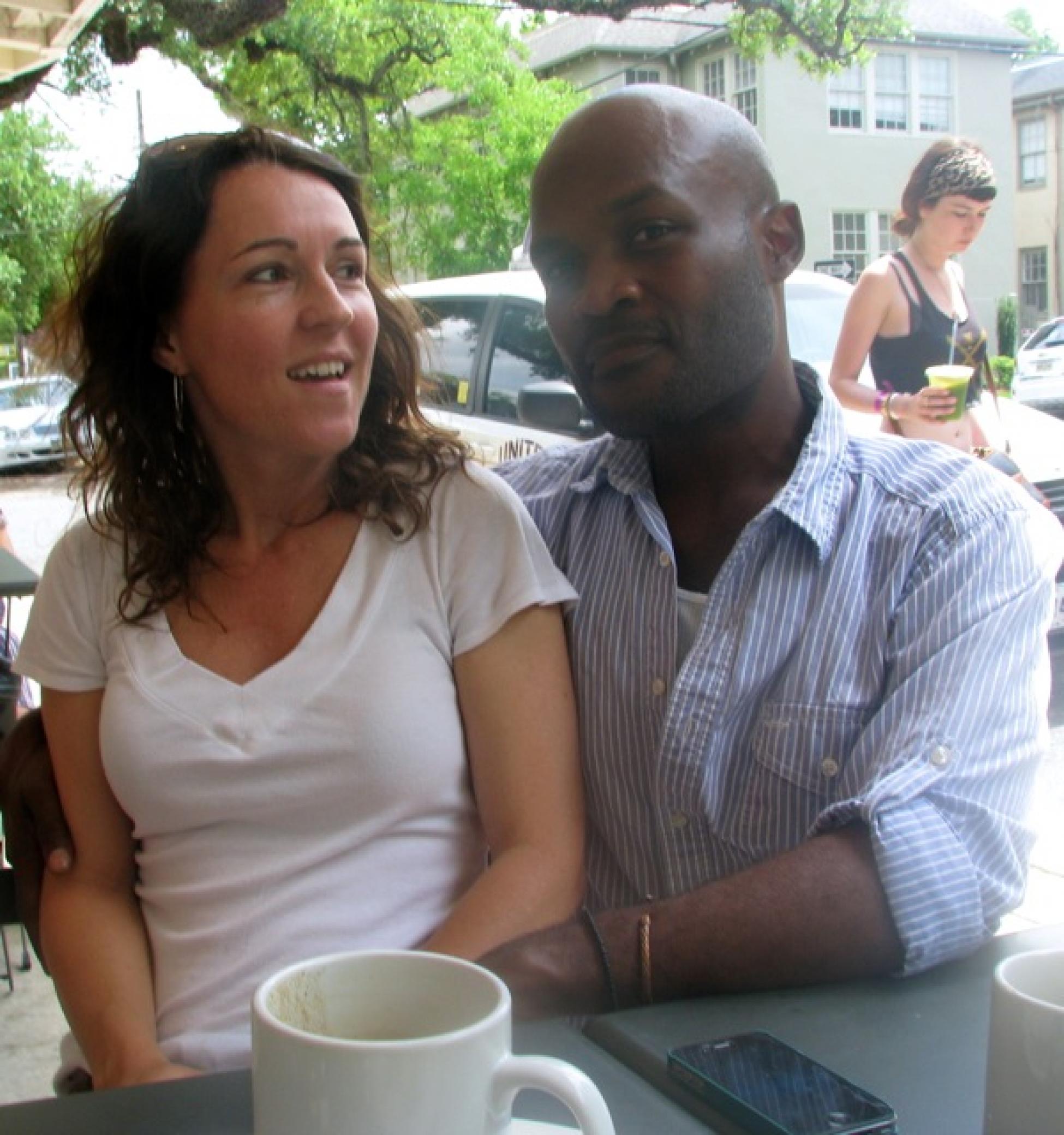 Kaya and Khari in New Orleans
By  Mike Land

Mike pushes beyond his comfort zone to make a difference.

Amid all the overwhelming emotions Kaya Martinez felt as she strived to escape New Orleans ahead of Hurricane Katrina, one that sticks was the sense of shared vulnerability.

“Down here it’s hard to find strangers anyway, and especially then,” she said, referring to the characteristic friendliness of New Orleans. “I thought I could get a flight out and of course that didn’t work, and ended up getting out with a DJ from WOWZ whom I’d interviewed for my thesis. He wasn’t even a friend, more of a friendly acquaintance, and he made room for me in his packed car with their kids and their nanny and all their artwork.

“Later that same week, I was in small town in New Mexico, living with my grandma. By that Friday I had a job teaching kindergarten there and stayed out the school year. Talk about receiving the gift of family, the generosity from people just wanting to help! And the volunteers, coming down and some of them liking it here and deciding to stay and make this home.”

The reality she’s describing seems far away as she and partner Khari Allen Lee dine with me at a sidewalk café. The day before I’d sat with Kaya at a bustling Jazz Fest, listening to Khari and the New Creative Collective passionately perform their own compositions, intricate pieces based less around solos than collaborative playing off of one another. Katrina is eight years in the past and that’s a good thing, even if the city has a long way to go in restoring neighborhoods, not to mention the wetlands that protect the levees in the first place.

But there’s at least one consequence of Hurricane Katrina that Khari and Kaya wish wouldn’t fade away.

“When we have great natural disasters,” Khari says, “people have a natural tendency to connect and that’s amplified. Some of the other energies in society that separate people get moved away, and our natural tendency toward connection comes to the surface, because this is the way we really want to be. We want to be connected.”

Of course, some people want to be less connected than others and depending on our values, we all have some kind of person we don’t want to be connected to any more than absolutely necessary. But I suspect he’s right: Most of us probably do feel trapped by all the boundaries that separate us, from the biases of gender, race and class to the ruts of professions, politics and personal feuds.

That’s one reason some merge the urge to travel with the need to volunteer—we not only want to escape our local ruts, but also meaningful connect with those of another place by making a contribution. That’s why I’m here now, in the third week of a three-month community service road trip from coast to coast.

So I’m in the pro-connection camp. It’s the only reason I know this charming artistic couple. Two years ago, determined to get past the crass tourism of Bourbon Street to something more substantial, I sought out Khari’s group at Snug Harbor on Frenchmen’s Street. As Kaya said, it’s hard to find a stranger here; a correspondence began that led to this lunch today, despite the fact that Jazz Fest is the busiest week of Khari’s professional year.

But, well, time for a confession. This trip so far also has brought out my own fears and anxieties, hang-ups that threaten to separate me from deeper connection with those around me. Those barriers come in a variety of forms.

One is that individualistic notion of not wanting to impose on another person or intrude on his or her privacy—a worry that has escalated in my 14 years as a New Englander almost to the point of paranoia. One way it manifested itself is wanting to do something for the people who help me. When I tried to pay for Kaya and Khari’s lunch, she looked at me and said, “That’s too much.” Two days earlier, staying with a friend I didn’t know well, I asked if I could pick up anything for her and her son. She just wagged her head and said, “Mike!” In other words, chill, dude.

Worse, though, is one of the reasons I’ve been staying with said friend in a gated community out on the west side of town. The truth is, I am leery about what happens tonight, when I shift operations to my host agency, located in a run-down neighborhood. I am particularly concerned about my car, crammed full of provisions for a three-month trip. (Was I really this materialistic? Apparently so.) And, of course, even worse than that is my self-consciousness as the middle-class white man in a majority black lower-income neighborhood—particularly in a town unfamiliar to me. (I’ll be far from Bourbon Street tonight.)

But I’m also pushing myself beyond my comfort zone in a literal sense. Will my 56-year-old body, with its profoundly damaged right shoulder, arthritic neck and back, fold itself comfortably onto bunk beds, not to mention the tent camping looming down the road? And, oh yeah, lots of physical labor.

All these voices, practical in their own way, could, if I let them, separate me from what’s three weeks of joyful connecting and in some cases reconnecting with eminently worthwhile human beings.

For that matter, I wouldn’t be here with my new friends Kaya and Khari—I’d have assumed the negative rather than the positive, assumed they wouldn’t want to spend time with yet another jazz fan tourist.

Yet because I overruled those voices, we’re lunching together, having a deep-going talk about culture, community and connection. And when I get back to my west New Orleans host, we have yet another long conversation about the path that led her from Senegal and dentistry to New Orleans and public health, including the creation of a mobile dental clinic called Smiles 2 Geaux.  I’m almost as moved by our conversation as I am by her example. Then I load up, find my way to United Saints, and find Jen, the incredible volunteer coordinator, sitting on the stoop in the cool of the evening. She hugs me, helps me lug up my stuff and eases my neurotic fears a about my packed car.

It only takes a day to feel attached to my new community. When I mentioned doing a coast-to-coast road trip this week, one New Orleans native slyly responded, “You mean from the East Coast to the Gulf Coast?” As I write this now in a Magazine Street coffee shop, I’m wondering how I can put off going to my next stop—despite the fact it’s a place I know, a retreat center in the Texas hill country. Won’t I miss my New Orleans’ neighborhood, the friends I’ve found here?

But even in those vast open spaces of Texas, there are more people waiting. More friends I just haven’t met yet.