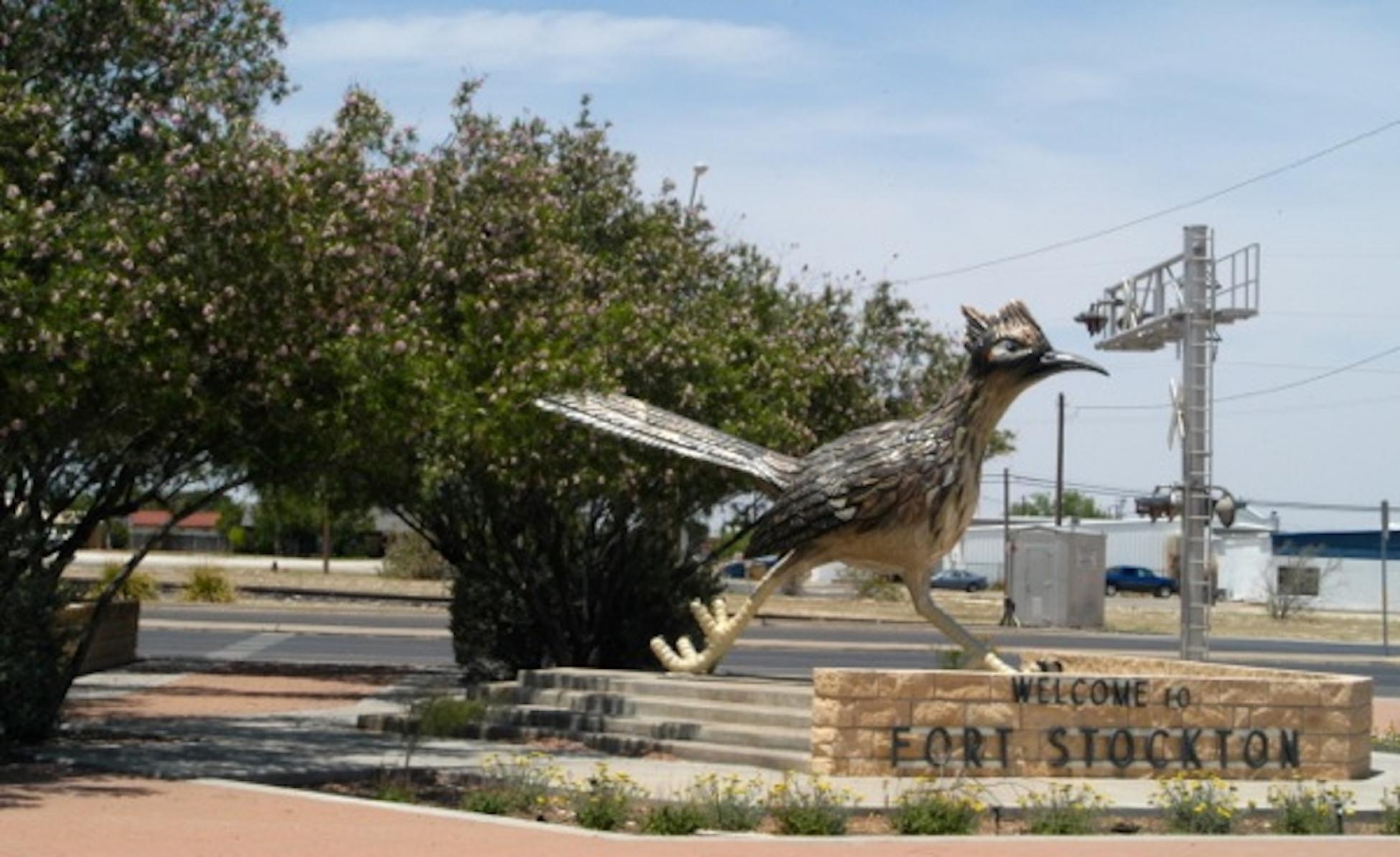 Travelling on the kindness of strangers.

On a hot Monday in Ft. Stockton, Texas, I was standing next to the giant roadrunner—and, unlike that resourceful desert bird, I was seeking the kindness of strangers.

In this case, a woman—slender, 70-ish, local—seemed to have set herself up as an informal greeter for tourists who stopped to take pictures of the bird statue. She was giving me and two other tourists advice about the wisdom of a two-hour swing south to Big Bend National Park, an area that friends had urged me to explore on my community service road trip.

The woman highly recommended me ditching Interstate 10 for Big Bend. But then she launched into a series of cautionary notes, ranging from being sure to have enough water, food and insect repellant to how much it would cost to get a tow if your car broke down.

I half expected her to throw in, “Oh, did I mention the fire-breathing dragons? You definitely want some clothes that are flame retardant.”

Heeding her suggestions, I headed right for a local grocery store, stocked up on the advised items and got right back on the interstate.

It wasn’t just her worst-case scenario advice that talked me away from Big Bend. Truth was, even before I talked with her, my sense of “you only live once” adventure was being worn down by mounting anxiety. I was a month and a week into what was stacking up to be a three-month community service road trip, volunteering and interviewing folks about their service commitments. Immediately ahead were two weeks of unfamiliar territory between here and California, where I would at last be on friendly turf again.

Don’t get me wrong—I love variations of landscape, and I felt awe at the gradual shifts in the wide-open spaces as I headed toward the western tip of Texas. But the hours behind the wheel also invited question after question.

What if I ran out of money? Did I have enough interviews? When would I transcribe interviews I’d already done? And when would I write about any of it? What if the car really did broke down? What if I broke down? (The last of which sometimes felt like a distinct possibility.)

While traveling alone means less negotiation with others, you still have to negotiate with yourself. And you are, after all, a lot of people: Adventurer. Homebody. Writer. Slacker. Volunteer. Worrier. The hours on the road alone mean there’s no friend on your side who knows how to balance for your negative tendencies. Even as you keep challenging yourself, you feel that absence. The result of all this is an overpowering sense of vulnerability.

But over the next few days, I came to own that vulnerability as a blessing. It would open me up to deeper levels of gratitude and appreciation. True, my first two nights in El Paso were lonely; they consisted of hunkering down in a Motel 6 next to the interstate, taking care of car stuff, restocking items, doing laundry, transcribing and writing. But on my third day in El Paso, I finally had my visit to Annunciation House, where Ruben Garcia and his volunteers take in immigrants who make it into El Paso, only to feel lost.

Entering, I saw the women and their children in the lobby, smiled, fumbled through a phrase or two of poor Spanish—my ineptitude making it clear that they shouldn’t have high expectations. I still felt separate, in the role of the journalist waiting for an interview. I’d already been told they wouldn’t have any volunteer work for me to do.

Then came a blessing: A truck arrived to pick up 40 or so big plastic bags of donated items from the Annunciation House basement. I happily threw myself into the work, alongside some of the immigrant residents and the volunteers. A boy, perhaps four, proudly claimed the role of holding open the door. By the time Garcia arrived, I felt, for the moment, a part of something bigger than myself.

The next day, a similar welcoming happened as I drove a half-hour north to visit the Sisters of the Assumption in Chaparral, New Mexico. They, too, worked mostly with immigrants, only out in a rural area. In addition to helping every way they can with immigrants, they also provide a ministry to a nearby prison. The sisters welcomed me to their table and made me feel thoroughly at home, to the point that I set aside my recorder during lunch, feeling it would violate the spirit of the gathering.

I spent the afternoon watching the Sisters of the Assumption interact with students – most of them from abroad – visiting as part of a Georgetown program focusing on immigration policies around the world. At one point, one of the nuns mentioned a basic fact of existence for illegal immigrants: Every day is spent, consciously or subconsciously, in fear of being picked up, found out, sent back..

Obviously, an immigrant, legal or illegal, feels vulnerability a 100 times more intense than my own. Still, my week in West Texas helped me see the vulnerability I did experience—to anxiety, to fear, to loss of faith in my project—as a blessing.

For one thing, the anxiety of travel at least increased my empathy with those even more vulnerable. Then there is the tremendous sense of gratitude whenever I was welcomed into an agency or a home, given the opportunity to feel accepted and even useful. So much of service does come out that sense of gratitude—gratitude born of being put in a vulnerable place, only to receive the kindness of strangers. And travel—whether to developing countries, or inner city soup kitchens, or the roadrunner statue in Ft. Stockton, Texas—helps get us there.