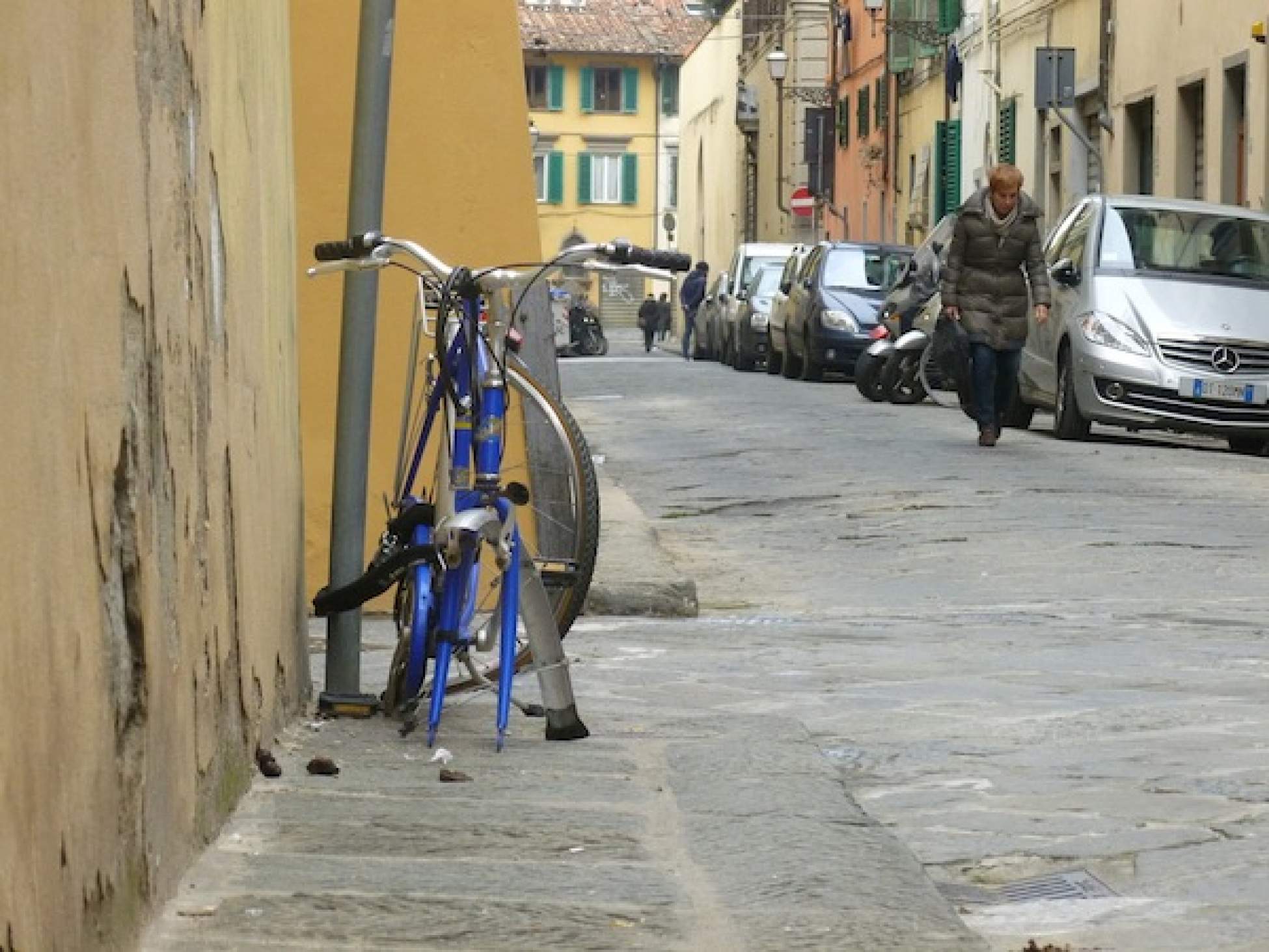 What my brief time as a city cyclist has taught me about life abroad.

Moving to a big city, one thinks a lot about transportation: Do I take the bus when it’s too far to walk? Is the price of cabs too steep? And walking around the cobblestone streets in Italy has shown me a thing or two about distance—especially after the numerous Vespas and 10-speeds zoom past me on my commute to class.

So I did the sensible thing any student ready to tackle city life would do—I bought a bike. It seemed to be the most economical and health-conscious form of transportation. For only a 100 or so Euros I had it all; aluminum frame, gear shifting, three-setting nightlight and a bell I couldn’t wait to try out in the Piazza della Signoria.

I rode home from the bike shop like a Florentine Lance Armstrong, circumventing around locals and tourists, who didn’t have the wonderful advantage of life on two wheels. “Oh, the places I could go!” I thought. I could bike along the Arno. Ride up to the Piazza Michelangelo. Maybe even take a day trip to Prato. The opportunities in this new city were endless!

Fifteen hours later the bike was stolen. Gone. Out of my life like a cancelled television show on Fox. All that was left was an inch-long remainder of the lock's chain. So I did what any naïve expat might do—I took off to track down my beloved two-wheels. I scoured through via after via, street after street, hoping that I’d catch a glimpse of my black beauty lying in an alleyway, or the bike thief himself pedaling towards me. I even took the time to memorize the Italian phrases for “Where did you buy this?” and “Looks like you chose the wrong day for bike hunting!”

After walking around town all day, I begin to accept the truth of the matter. My bike was gone.

After doing research, I found out that bike theft in the city of Florence is a little higher than most cities in Italy. One resident, who’s had over 11 bikes stolen in six years, wrote a letter to the mayor Matteo Renzi about this incredible frequency of thefts. Renzi responded by announcing his own efforts to discourage thieves by installing more efficient bike racks across the city and “asking bike shops to develop an ethical code when purchasing used bikes.” Yet there’s only so much city legislation can do, he said, as bike theft in Florence is inevitable.

I was still curious, so I asked the Florentine polizia about the chances of seeing my bike again. One officer told me in a rather routine manner that bike theft is most common in the city centre (where it was stolen), and that very few bikes are returned to their owners. To future buyers of bicycles, he told me that “two locks are better than one,” as every added lock is “one more problem for the thief.” Another officer gave me one sound piece of advice after I told him I was shopping for another cycle. “Don’t buy a beautiful bike,” he said. Rose Mackworth-Young, a writer for The Florentine, says it best when it comes to bike shopping: “Old is gold.”

Told that the Florence Military Police would have more information (that, or the Carabinieri simply wanted to send an American giornalista with poor Italian elsewhere), I sat down and talked with Segretario Stefano Naldi. He told me that although bike theft in Florence is noticeably high, it is the same, or even worse, in cities like Rome and Milan. What some might think is a large, grand operation of a “mercato nero” scale is false.

“Bike theft in Florence is done mostly through small, individual markets,” said Naldi, “not one big market.” Thousands of bikes are stolen per year, and yet, according to Naldi and others, the vast majority of thieves are not apprehended for their crimes. Renzi recognizes this difficulty of preventing such thefts, which seem to be the norm in Florence. The many wheel-less frames that I see on my daily stroll around the city are a clear reminder of this.

Other than what brands of bikes go faster or how important it is to immediately and properly document a newly purchased cycle, I’ve learned what one must accept when living in a heavily populated city. This maybe the greatest forewarning to those looking to cities in Italy, France, or the UK—be prepared for the good and bad, as both are unavoidable realities. Make sure that whatever happens, you learn from both. And if you decide to buy a bike for your time abroad, be sure to lock that baby up.