You are here: Home/ Articles/ Study Abroad/ Blogs/ Trekking Along the Cliffs of Moher

Trekking Along the Cliffs of Moher 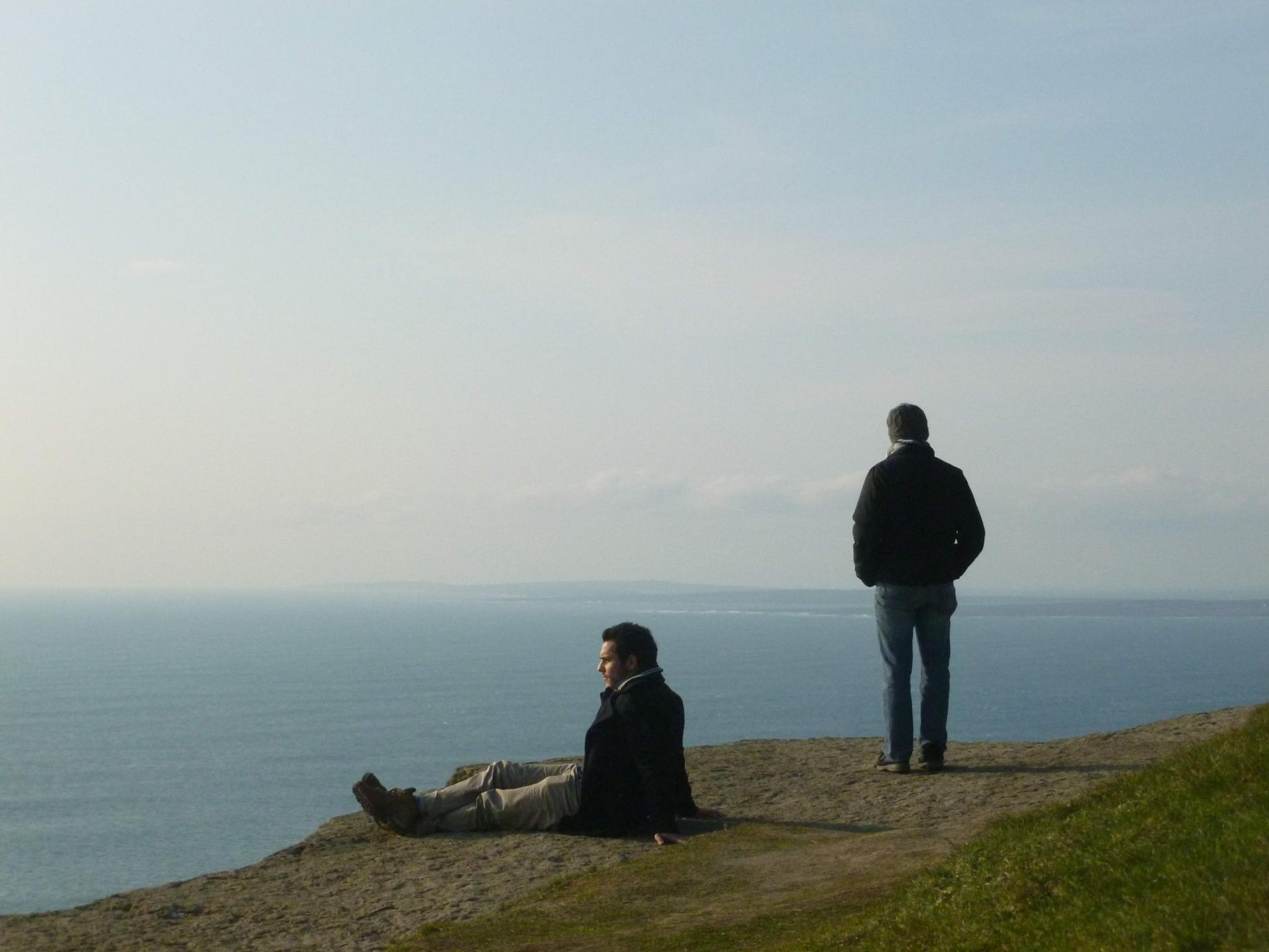 Mark finds more than mermaids on an ambitious hike.

“Don’t get too close to the edge,” Billy, the tour guide, said jocularly to us as we were exiting the bus. “Someone falls over every couple years or so.” Looking down the 210-metre drop, you really hope the earth below your feet doesn’t give way.

The Cliffs of Moher is something of mythology itself. The name Moher comes from the the Mohar’s Tower, a lookout point first built in the 1st Century BC, and later ruined.  (Hence the name Mohtar, which means “destroyed fort” in Irish.) According to Celtic mythology, it’s home to the sunken city of Kilstiffen, which surfaces every decade for certain spectators, as well as alluring mermaids and corpse-eating eels, which live among the cliffs.

Yet it’s not the thought of Irish fairies in ring-forts or phantasmal sea creatures that gave me so much awe. Inspired by mythological tales, I decided to hike to the town of Doolin from the Cliffs, about a five-kilometre trek. Billy looked at me like I was mad when I told him I was hiking back. He eyed my shoes doubtfully. “Well, they’re not the best. But they shall do,” he said.

With nothing but a cell phone and a pen and pad in my pocket, I took off north, leaving behind what could have been a cozy bus ride back to the hostel. Billy stopped me before I left, seeing I was umbrella-less. “You know,” he said looking up at the sky, “the weather looks like it should be in your favor today. Be wary about sundown, though.”

About a half kilometre from the Tourist Center, I broke away from the crowds. It was the first time I was truly away from the city and its characters—the street performers, barraging leather-bag merchants, the David souvenirs—and was eager for peace and an odyssey of my own. I was Joyce’s Leopold Bloom, if Ulysses had taken place south of Galway.

After carefully descending a steep row of limestone steps, I came across a stout couple fidgeting with their point-and-shoot Canon. The woman, wearing big sunglasses, greeted me with a smile and held out her camera for a photo-op. We chatted about the Cliffs after her husband okay-ed the shot.

“Oh it’s just gorgeous today,” she said looking out to sea. “It’s a wee bit windy, but you’re lucky, though.”

“Well because it rains a lot here in Ireland. Don’t you know?”

Claire and her husband told me they were from Comber, near Belfast and were traveling to the Cliffs for a small vacation. Although Claire likes taking the RV around the country, she said they left it at home in Comber because of how short of a trip it was. When I heard it was their fourth time to the Cliffs of Moher, I asked if the sublime sight ever dulls.

“No,” her husband jumped in, “but that’s because it’s usually raining when we’re here.” He laughed.

They thanked me again for the photo and we parted, walking our separate ways. The wind kicked up, threatening me into the Atlantic, so I hopped down on the safer side of the limestone barrier. When I was about one kilometre away from Monroe’s Tower to the south, I landed upon a flat edge of shale rock with thin cracks in the ground running vertical along each other. Only when I sat down in the softer grass did I notice someone doing the same. He seemed to be lost in contemplation, staring out to the horizon.

Victor, a 26-year-old from São Paulo, Brazil, could not have looked more elated—on top of the world. Along with three friends, he was touring Ireland by car. We stood together talking, in awe at the white waves that exploded against the rock below. Victor told me how incredible a feat of nature the cliffs were and walked to the edge to get a better look. “It would be terrible if I fell over,” he said and we laughed in agreement.

Before I left Victor, I asked him more about his hometown in Brazil and how it compared with the Atlantic coast of Ireland.

“São Paulo is beautiful, yes,” he said, “but it’s the beauty of a city. Here, there’s a different kind of beauty.”

Victor and the three other São Pauloans were the last persons I saw for another kilometre or two. By five o’clock that evening, I began to feel the harsher effects of the hike. I lost one of my shoe soles to a stream of mud and still had to beat sundown in less than two hours. As I was hopping through a pale green field, sheep resting to the north, I started to feel rain. With only one functional shoe, I hopped under the closest form of shelter nearby: a tiny limestone monument that looked like a companion piece to England’s Stonehenge. I looked down at my muddied Levi pant legs and destroyed shoes, relatively unbothered, and thanked that these ancient contractors were conscious of Irish weather.

The rain ceased quickly, so I continued my hike. When I could just about see the façade of Gus O’Connor’s pub down below, I passed two college-aged girls sitting tiredly on a small cliff bank. The blonde with pale skin laughed when she looked down at my feet; the other pitied me. I told them I was jealous of their Nikes.

I asked the girls why they had stopped short. One told me that they were lost. I reassured them that they were going the right way, pointing out to them the spot near the boardwalk where Dusty the Dolphin jumps up for lucky admirers.

Just before the sun went down over the cliffs, I made it into town. I could hear the crying moans of the cows in the nearby cattle farm as I limped towards the hostel. There is no evening like an evening in Doolin, especially after you’ve just took a plunge in its mud traps, spritzed by the mist of its waves and pounced on by its rain. Only then do you earn its peace and tranquility—and also a pint in nearby O’Connors.

When I returned to the Doolin Hostel, I told the host, Anthony, about my trek along the Cliffs of Moher. He was leaning nonchalantly up against the cashier’s desk, flipping through the pages of the check-in list.

“Ah. They’re beautiful, huh?” he said, still looking down at the movement of his pen.

“Yes, but there’s one thing,” I said standing in the doorway. I held up the remainder of my shoes.