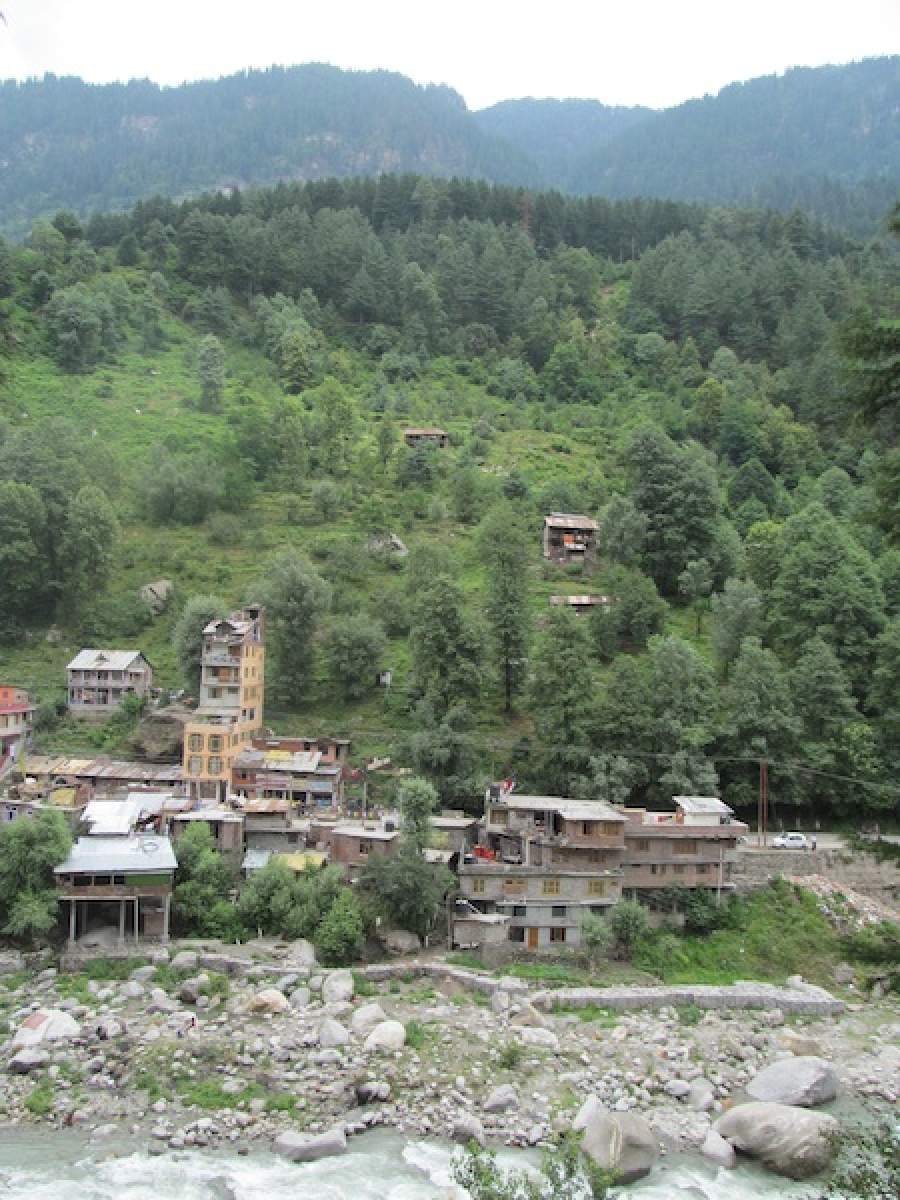 Carly finds magic in a simple bus ride from Shimla to Manali.

Semi-deluxe was an overstatement. Still, I climbed the steps onto the bus and found seat number 11 on the left-hand side. Someone had already placed their luggage on the floor in front of my seat. Not knowing who the culprit was, I dumped my backpack on top and nested in for the 10 hour bus ride to Manali.

That would be the start to an entertaining night. I was already exhausted, having had my sleep botched the night before on another extended bus trip. The excessively winding road through the mountains leaving Shimla had me swaying from side to side in my seat at every turn, affording little possibility of rest. Whenever I dozed, I was jarred awake by my own head hitting the window.

The man occupying the seat behind me refused to accept my attempts to recline. Instead of using his words, he used force to artfully maneuver my seat into an upright position each time I put it back. Several times during the trip I slyly tried to re-recline it, only to feel it reach 90 degrees again in a matter of minutes.

During the bus ride, the conductor, who seemed intent on blowing his whistle at excessively frequent intervals, got into an argument with one of the young men seated at the back of the bus. He commanded the driver to stop the bus and marched to the back, where a heated exchange ensued between the two of them. Absolutely everyone on the bus, myself included, turned around to satisfy their curiosity by watching the tiff play out. Some of the passengers didn’t hesitate to add their own two cents. When I asked the man beside me what the argument was about, he made an indistinguishable gesture—something of a shrug, I guess—and turned away, but I think it had something to do with the fact that the man was noticeably drunk.

At times the bus would lurch to a halt, and people would step onto the bus—I don’t know where they appeared from at that time of night, in the uninterrupted darkness on the side of a road edging ever-steepening hills. At one point, I opened my eyes to a lanky young man cowering over me from the aisle with one arm above his head to clutch the rail as his head bobbed lifelessly on his shoulder. Others waved at the driver and the door opened to let them out into the night.

I was dozing in and out of sleep by that time; I opened my eyes once more to find that the bus had stopped completely. The man who had been sitting in the seat beside me was gone; he was probably standing outside the bus with the passengers who had roused. When I opened my window and stuck my head out to see what was going on, a lone lamp poured yellow light on a scene, which involved both conductor and the driver hunched over one of the bus’s tires. They seemed to be hammering away at it with some kind of tool. I decided it was a good opportunity to sleep.

The next time I opened my eyes the sun had barely risen, the tire problem had been miraculously solved and the bus was rolling through a lush valley shrouded in morning mist. For the first time during the bus ride, I wanted to stay awake to take in the mystical vista before me. Vegetation-clothed peaks jutted up towards the cloudless, sun-washed sky from the river, where translucent water trickled and gushed over a bed of rocks. The air rushing through the window was fresher than any air I had ever breathed in India; I had my first taste of being in the mountains.

That was the Beas River, in the Kullu Valley. Shortly after, I fell asleep again, and woke up to find that everyone had disembarked—the bus was completely empty! The last man to leave had so kindly tapped me on the shoulder as he descended the stairs. I knew that we weren’t in Manali yet—it was barely six o’clock and with all the delays it wouldn’t have been possible. Actually we were just in Kullu. I scrambled to gather my things, stumbled off the bus and followed a course of pointing fingers to an overcrowded local bus that had absorbed the passengers who would go on to Manali.

In the end, I made it to Manali a little tired, but fully content. I think my bus ride was actually something of a walk in the park when you consider all of the potential transportation woes possible in India. Moreover, the experience was a reminder that traveling in India necessitates a laissez-faire attitude. Circumstances can upset the plans of even the most meticulously-organized traveler. But, often, there’s no reason to worry. Tires will get fixed, people will wake you up when you need to get off the bus, and in general, everything will turn out all right. No need to sweat the small stuff.

It’s a lesson in having faith. If you believe that you will make it to your destination in the end, most of the time you will. And when you don’t, sometimes where you end up is better than anything you could have planned.