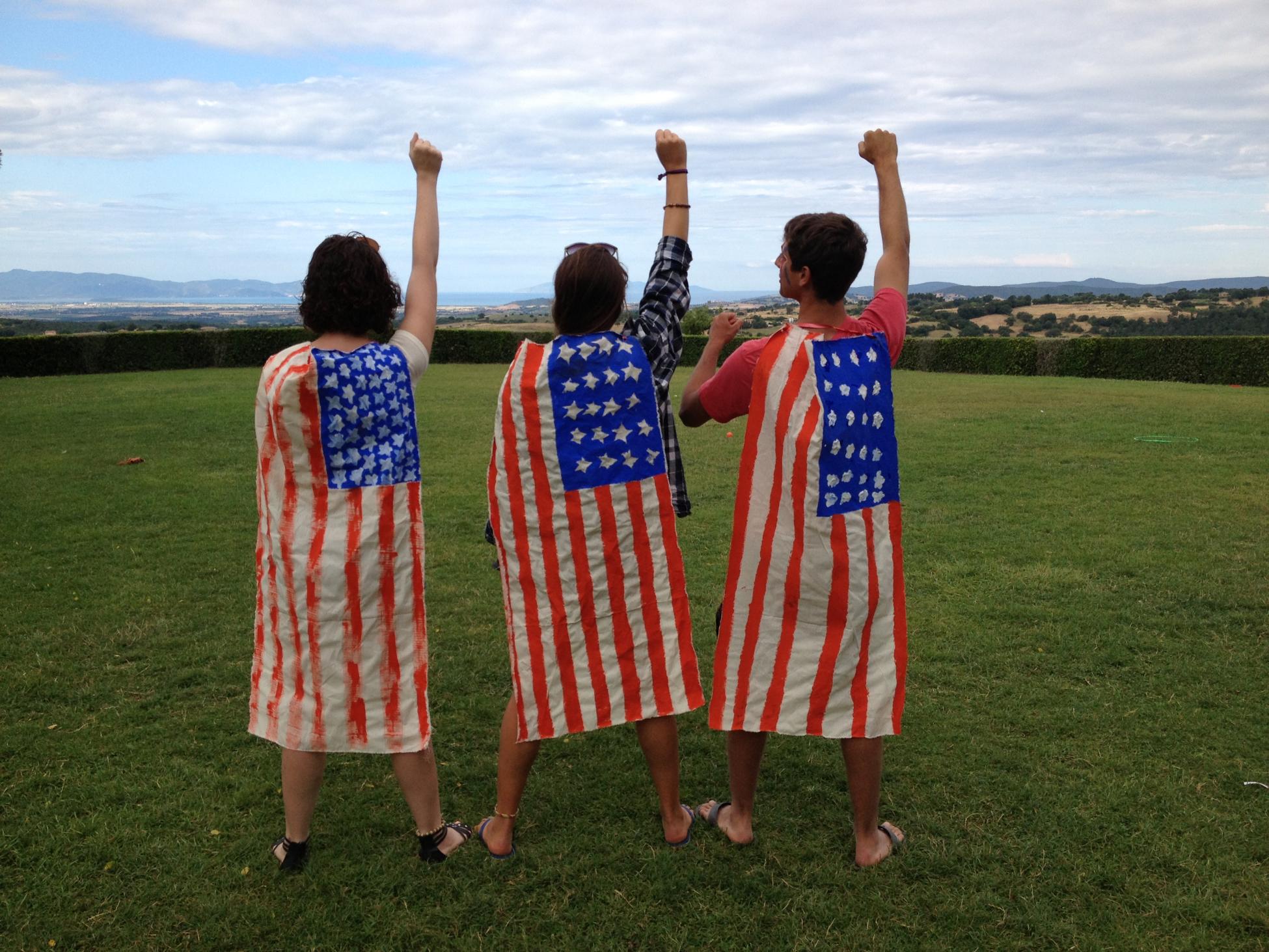 Adele struggles with homesickness when the celebrations of July 4th and the America Cup in Chile clash.

On the morning of Fourth of July, I woke up a few minutes early to leave myself time to dig out the best patriotic outfit I could find. As a big fan of costumes and a child at heart, I was disheartened by the lack of glitter and face paint available, but I did my best with a couple of bottles of kids' paint from work and some borrowed clothes from my roommates.

Not one to normally run around foreign countries screaming national pride for the United States, this day would be my one exception. A day that symbolizes family and friends, and is celebrated in the hot summertime with relaxing barbecues in the backyard, cold beer and homemade potato salad. But being in the southern hemisphere surrounded by snow and ice and Spanish-speaking friends didn’t feel quite right. The face paint wouldn’t quite fill the aching hole in my chest, but it was a start.

Celebrating holidays abroad is difficult. Days that generally symbolize the best parts of my life at home become days spent mostly in sadness.

So as I arrived to work with my patriotic colours and North American swagger, I was slightly shocked when the first person I saw began dancing excitedly and yelled, “Essssooo, vamos Chile!” That’s right, "let’s go Chile!" Confused, but still determined (and unable to move my smile much anyway, with the already stiffened and crumbling tempera pain), I was even more shocked when the second person I saw was as equally decked out, if not more, in red, white and blue. The third person I encountered had a silly Jester’s hat with dancing bells, stars and stripes, and the fourth had a Chilean flag draped over her shoulders. Either Chile was trying to hop on the Fourth of July bandwagon, or I was missing something.

When a group of people pulled into the parking lot sporting light blue and white and shouted some obscenities at my choice of colors, I finally figured out what I had forgotten. Today was the final soccer match of the America Cup: Chile vs. Argentina. Chile had never won the America Cup in history, and Argentina is one of their most hated rivals. This was a big day for Chile. And just like that, it was no longer a big day for the one gringa in town.

For the duration of the day, 90 per cent of the people I encountered took in my face paint and choice of outfit as a show of dedication to my adopted country, which happens to sport the same colours and shapes in their flag as the United States (and many other countries).

I politely cheered along with them for the national futbol team, discussed the odds of winning (100 per cent of course), and cried a little bit inside each time at the loss of my national holiday. A few conscientious individuals—mostly those who had spent long periods of time in the United States and had experienced a Fourth of July for themselves—offered felicitaciones for our independence day, and then asked me where I would be watching the game that night. A naturally happy and outwardly cheerful person, I did my best to hide the growing bitterness that I now felt for the America Cup, but it became harder and harder as the minutes counted down to the start of the match.

Celebrating holidays while abroad is difficult. I often feel as though holidays highlight the things that are missing or lacking in my travelling lifestyle, and days that generally symbolize the best parts of my life at home become days spent mostly in sadness or denial abroad. Instead of celebrating life and love and family, I mourn the loss of my past traditions and the lack of communication with those I’ve left behind.

I always return to appreciating my traveling lifestyle and seeking out new friends and adventures shortly after, but for me holidays have become an unexpected excuse to be homesick. The Fourth of July 2015 started out the same way that I had honoured previous holidays while living here; angry at the lack of costumes and glitter, sad at the thought of my family barbecuing hotdogs on the beach, and miffed that Chile had the audacity to celebrate their own patriotism on a day that was supposed to be about mine.

But as Chile scored the goal that brought them their first America Cup victory in history, and the entire population of our small town in the mountains burst with joy, it was hard not to be caught up in the festivities. Children and grandparents, young and small, shrouded themselves in Chilean flags and headed toward the plaza to celebrate together, while those with autos of any kind lined up and began lapping the small centre square in town, honking horns and allowing as many as possible to climb into the beds of pickups or into the back of open trunks to join the parade. The small group of car-less people still jumping and hugging in the centre began to sing in unison, chanting and yelling at the top of their voice.

And in that moment, as everyone I knew (plus many more who I didn’t) hugged me, congratulated me, and pulled me in to share in this exciting moment, I realized I had been wrong. I had been wrong to let physical distance change the way I feel about important traditions. And I had been wrong to mourn the loss of family and friends and national pride on this specific holiday, when all three things were already there, begging me to join them.

I have been incorrect and borderline lazy to think that I can’t celebrate holidays while located on a different continent. Preferring to wallow in self-pity and self-imposed solitude, I had failed to notice that everything I was “missing” had been there the entire time. Sure, I had to make a few changes, such as singing and rejoicing in a different language, and swapping one flag for another, but ultimately the important sentiments are still there.

Travelling does not always mean giving up and abandoning our favourite traditions from home, but instead just requires an occasional adjustment or reworking to fit them in and share them abroad.