You are here: Home/ Articles/ Work Abroad/ Blogs/ How I Became a Ski Instructor in Chile

How I Became a Ski Instructor in Chile 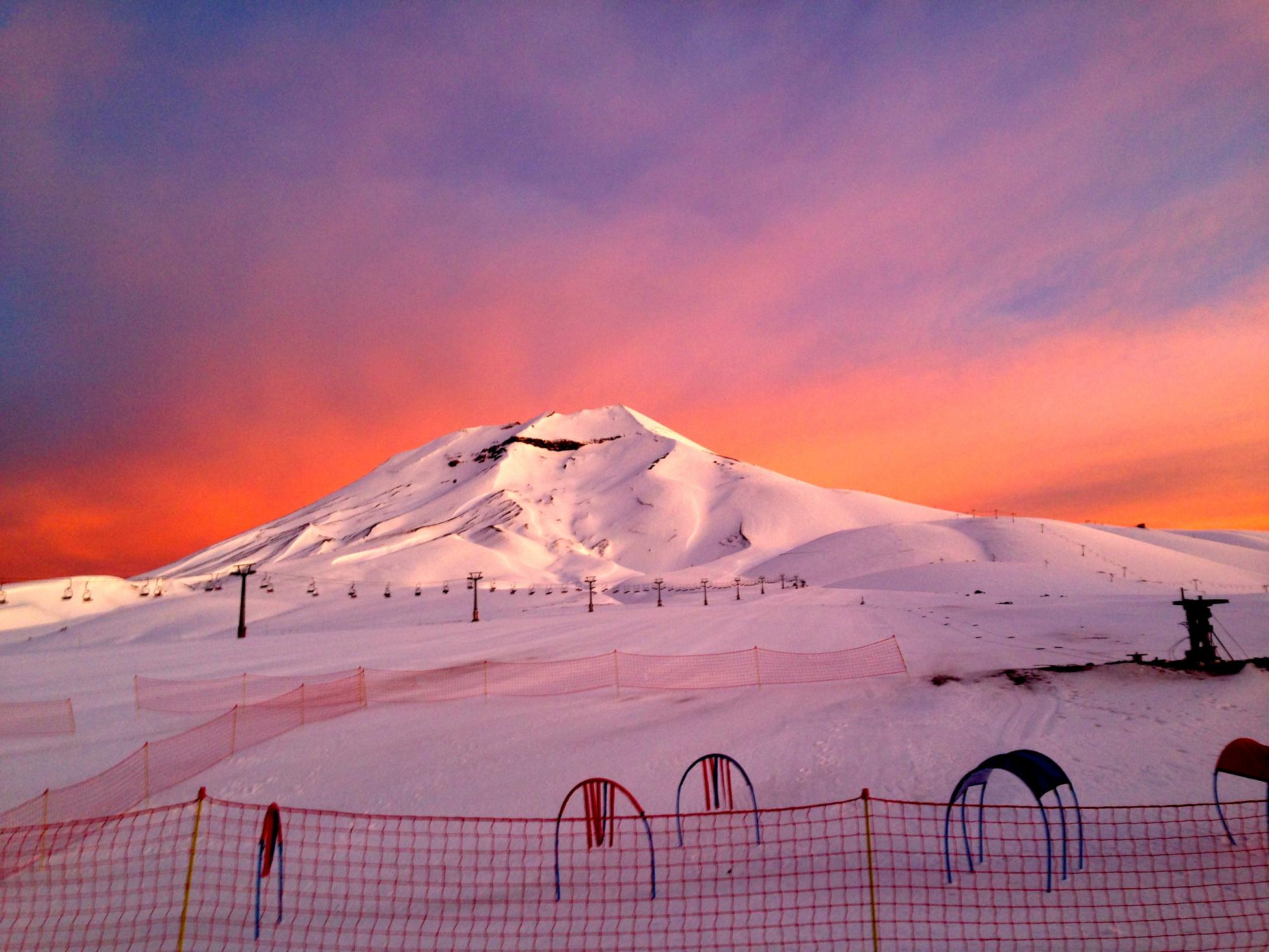 Falling in love can lead to dramatic changes in plans, unexpected developments and life lessons learned.

Growing up in Vermont, my first love was probably snow, and my second love was definitely skiing. I had a ski pass almost before I could walk, and, as my Dad likes to say, it all went downhill from there.

By the time I was six, I had entered the racing program. Middle school was spent travelling every weekend to compete, and in high school I transferred to a ski academy. While other teenage girls were buying lip-gloss and comparing Facebook photos, I was collecting colours of wax and diamond stones, and technology was mostly used to ooh and ahh over whoever had the biggest crash that day.

In college I became a full-time student and a part-time ski bum. When I began applying to English teaching jobs abroad (third love = travel), the natural decision was to head to the southern hemisphere in order to have two winters in a row.

Then I moved to Chile, and I fell in love again. But this time it was more complicated, because my love wasn’t a season or a weather pattern, but a person.

Conflict arose; my English teaching contract was about to expire, I had a plane ticket home, and I had just found the one person I didn’t want to live without.

So I improvised. I thought about what I was good at—skiing, laughing, teaching, eating, and skiing—and decided I probably couldn’t support myself on laughing alone, and eating most likely wouldn’t get me a visa. And that was how I found myself accepting a job as a ski instructor in southern Chile.

Despite the fact that I spent my entire life growing up on ski mountains, I had never even momentarily considered teaching. Skiing was a passion, not a profession.

Despite the fact that I spent my entire life growing up around ski mountains and loved all things ski, I had never even momentarily considered teaching skiing. Not to mention the fact that us ski racers usually made fun of ski instructors (man, could those guys in red coats possibly go any slower or rotate their shoulder a little bit more!), but skiing was a passion and a privilege, not a profession.

But now, after four months working as a full-time ski instructor at Corralco Mountain and Ski Resort, I am humbly admitting that donning a red jacket was one of the most educational and rewarding experiences I have ever had.

First, I learned how to communicate. Desperately needing this job, I was not exactly honest with my new boss about my Spanish abilities. When I arrived to my first hour of classes and was presented with five Peruvians who worked in the upper-management tier of the Coca Cola company, not only was it slightly uncomfortable having to resort to basic gestures to demonstrate hip/butt/torso positioning, but I also felt pretty useless as I watched five grown men flopping around in the snow while I stood by and attempted to yell Spanish words of encouragement.

Because it took a long time for my Spanish to become anywhere near fluent, I adapted to using body language, drawing pictures in the snow, acting and miming, and being hyperaware of my facial expressions and tones of voice. Sometimes it was exhausting—not only was I doing the physical work but the mental work was a whole other ballpark—and I gained a whole new respect about what it really means to be able to communicate.

Second, I stopped taking my body for granted. Being fit and healthy has always just been a part of my life: something to maintain but not really anything to worry about. As I watched young women collapsing from the strain of trying to make a snowplow, carried three or four sets of skis up the stairs for the father whose family and strength had abandoned him, and supported the body weight of middle-aged athletes with knee-replacements whose replaced parts gave out on them partway down the slope, I thanked myself and the good fortune that I have had to be able to maintain a strong and active lifestyle.

Next, I learned to appreciate every turn that I took down the mountain. Because the reality is that most of the days that brought two or three feet of fresh powder and bluebird skies also brought hordes of beginners looking to sign up for their first ski class. I spent most of those beautiful powder days in a pizza wedge, facing up the hill and watching as the unmarked sloped became tracked with lines that weren’t mine.

Fifth, I recognized what it meant to be part of a team. Sure, I was captain of the field hockey team in high school, I’m generally helpful, and I work well with other people. But when we had our first staff meeting and I didn’t understand a word of the important memos outlined to us by our boss, I found myself in a new position on the team. I was now the one who always needed help, who almost never understood what was going on, and the last one to move when someone said “go.”

I couldn’t always be myself; I didn’t know how to tell jokes, and when others tried to small-talk about the day I could just smile and nod. I was relying completely on other people, and I didn’t even quite know how to ask for help. But I was somehow embraced by the group, forgiven for my mistakes, and given 40 helping hands when I was lost in the whirlwind of misunderstanding and foreign words.

Sixth, I gained an appreciation for access to sports equipment and gear. On the first day of work, when I was handed a tight fitting, feminine-formed ski parka, I almost started crying when I was told that no I could not have a men’s uniform instead. Women in Chile celebrate their femininity, and embrace style into sports.

Skiing is a sport that is still being introduced in Chile, and the opportunities to share this beautiful hobby are boundless.

I wouldn’t have been caught dead in such a jacket at my home mountain in Vermont, where I usually dressed in Carhartt jackets and oversized men’s ski pants. When my feet were hurting and there were no ski boot shops within a few thousand miles, I learned to mould my own plastic and cut my own liners. And when I ran out of wax, I simply did nothing (besides cringing and dying a little bit inside every time I saw my dry bases).

Finally, I learned to empathize with others’ fears. As a ski racer who learned how to ski at such a young age that I don’t remember ever being confined to the bunny slope, I was a terrible ski instructor at first. I couldn’t sympathize with the small children who were reduced to tears at the thought of going up the chairlift. I didn’t understand the strong soccer player who was too nervous to make the move from snowplow to parallel skis. I got annoyed with the older women who didn’t have the strength to hold a wedge for more than a few minutes before sitting down for a break.

And then I took a step back. I thought about times when I’ve been embarrassed to be seen making mistakes, times when I grew so frustrated trying to learn something new, sure that everyone else around me was better. And I tried to lower myself off of my native-born skier pedestal to be compassionate and patient. And I think, ultimately, I did okay. At the minimum, I stopped yelling and rolling my eyes.

Being a ski instructor was not quite the same in-the-box experience that I had always expected. Although it was a means to a visa and a way to pay the bills in the beginning, by the end I was relishing every moment that I had on the slopes, sharing my first two loves with other people. Seeing the smile on a face that just swung into the air on their first chairlift ride, or helping to instil the confidence in someone who had never had a great command or abilities with their body was worth missing a few powder days (but only a few).

Skiing is a sport that is still being introduced in Chile, and the opportunities to share and expand this beautiful hobby are boundless. Hearing another soul blessed by the snow gods and vowing to go buy a pair of skis and get back to the mountain was a refreshing reward of an hour’s hard work.

And really, what could be better than spending every day in the snow, being humbled, and doing what I love. It helped that my other love—the man that is—was also wearing a red jacket and waving as he snowplowed by.