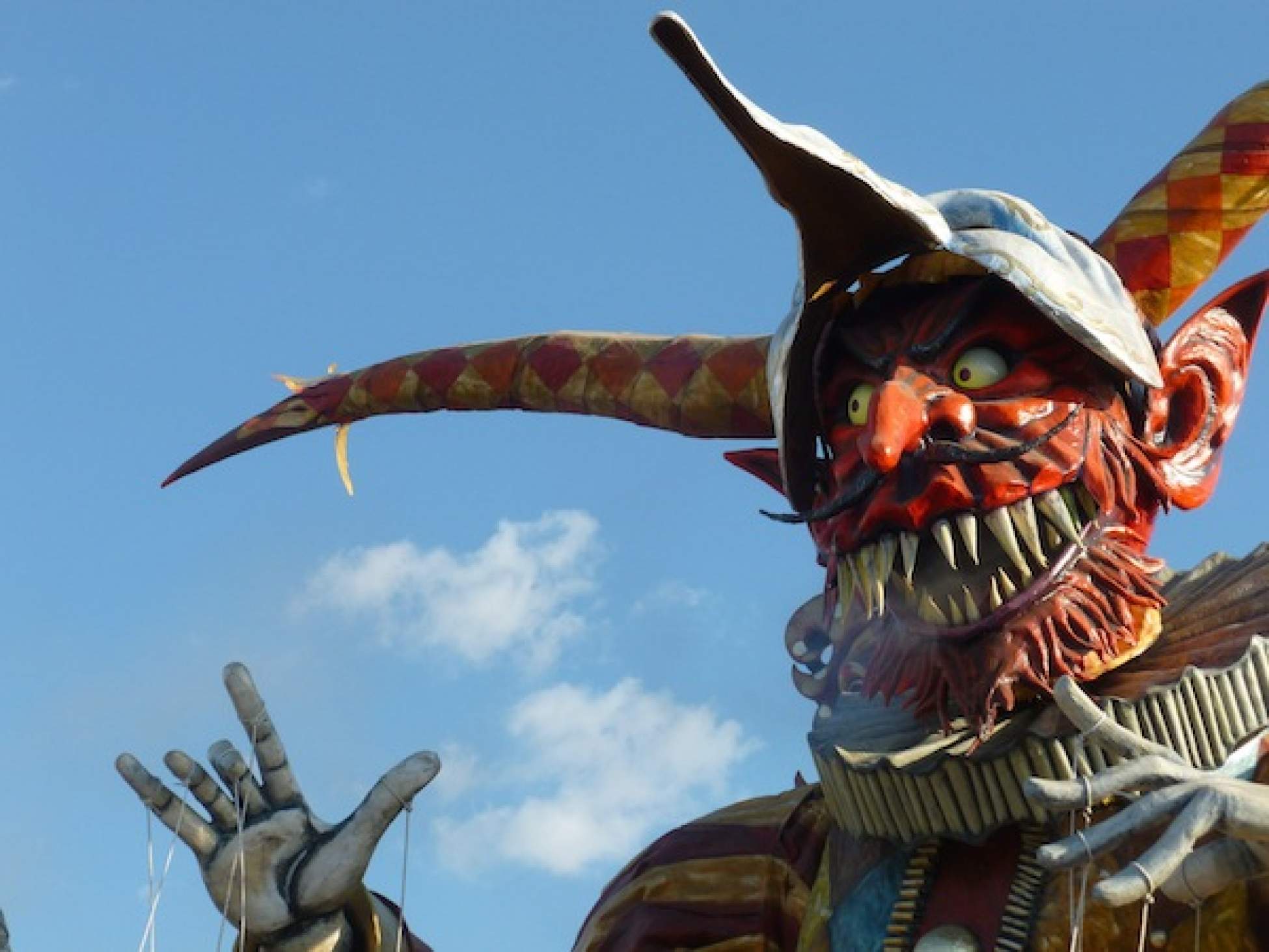 Mark discovers that in Italy, celebrations are also worthy of critical thinking.

"You could never get away with this in America,” my friend said to me as a gigantic cara (float) passed by us, blocking out the sun at Carnivale in Viareggio. On the end of the float was Italian Prime Minister Matteo Renzi climbing a papier-mâché Florentine Campanile, stark naked.

And it’s true. The allegory to the current situation of Italy could not have been more clear and colorful, electric and vibrant. The political allegory couldn’t be more daring. Putting it bluntly, the kaleidoscopic spectacles of Viareggio’s Carnivale makes the Macy Day parade look like an afternoon walk in the park.

For first time Carvivale-goers like me, the imagery is somewhat shocking. From what looks like something out of Willy Wonka, bloated Italian politicians float like balloons, others dance, taunting the crowd. Iconic Italian comedian Beppe Grillo stands in a raised basket flipping the bird to his audience; many are encouraged to return the volley. The “Dreamcatcher,” a satanic-looking monster, lifts up his Carnival mask to reveal his macabre face, the hideousness that lies under the disguise.

Every year artists, crafters and sculptors around Viareggio show off their imaginative and haunting works, with synchronized dancing and costume design that looks like something out of an Italian Fifth Element. But there is meaning under the madness: Fratello Cinquini’s float represents the liberal Italian spirit with a monstrous John Lennon, “Revolution” blasting from behind him. Grotesque versions of Sigmund Freud and Gene Wilder in Lebigre & Roger’s “Hysteria” exemplify the current neurosis Italian citizens suffer from—the only cure seeming to be celebration. And then there’s Berlusconi hanging by a noose, the words fu un uomo buono e giusto (“he was a good and honest man”) painted on a wall behind him.

This is just tradition in Italy. The beginning of the Italian Carnivale stems back to 1873, when a band of well-to-do men in Viareggio saw a means to protest their government’s tax increase via a large festival. I Quattri Mori (“The Four Moors”) was one of the first floats to win the parade in 1883, for its likeness to the original sculpture in Livorno. The sculpture, a depiction of four Muslim men chained up below the Grand Duke Ferdinando, can be assumed to have had political relevancy. And only until after the Second World War did Carnivale gain its annual momentum, while competing with the celebration in Venice. Locals and out-of-towners from all over the globe have been showing up ever since.

Although aware of his past history with Italy, I couldn’t help but laugh at a naked figure of Berlusconi, with its rosy cheeks and clown-like grin. Watching the float pass by, I almost felt I understood the Italian plight for the first time: under the papier-mâché lies a fire only cooled with humiliating art.

“We all think Berlusconi is an evil man for what he did to Italy,” a 27-year-old academic researcher told me. Born in Italy, she confessed that her country’s moribund economy has led to her incentive to leave. “No one wants to live here,” she said after mentioning a move to Belgium. “You cannot get respect in research in this country. Italians must leave the country to get any respect.”

Another celebrator, in a baby blue Mad-Hatter-esque outfit, calmly explained to me why Berlusconi was not going to suffer from his recent conviction of fraud. “Here in Italy,” he said, “famous men do not go to jail. And neither will [Berlusconi].” After our conversation a little girl throwing colorful confetti smacked us both in the face.

Contempt of Italian politics isn’t unusual for its citizens. You can walk into a bar, café or sandwich shop and ask someone about his or her former mayor-turned-premier and are bound to get a mouthful. Just don’t be surprised when you receive nothing but pessimism. In Florence, a 25-year-old bartender once told me that he “wants to cry” every time he thinks of his city, the cultural stagnation giving him what he called the “Italian blues.” Yet another told me that “Renzi was their only hope” and he should be trusted if Italy wants change.

Matteo Renzi himself is lively and confident about his country. He’s been compared to Tony Blair and Barack Obama, mostly due to his age and casual persona. A rival to Berlusconi’s politics, Renzi, after being sworn in as the new Premier of Italy said that his “country is rusty, bogged down,” and “immobilized by an asphyxiating bureaucracy.” He recognizes the failing Italian economy and its affect on youth and swears to be the change needed to fixing it, to keep his country afloat.

Standing on the beach of Viareggio, looking off in the distance at the Apuane Alps, you can’t help but be distracted by its beauty. From the harbor to the northern tip of the beach town, you can see the parade, along with the floats pumping out their undulating beats of music. After grabbing a gelato at the beachside gelateria, I stood and watched another float with Renzi pass on by, a Palazzo Vecchio exploding around him. I couldn’t help but laugh at the ridiculousness of it. Although the new premier isn’t safe from the critical hand of the Carnivale sculptors, he seems to be better off than others—naked or not. At least until next year’s celebration.