You are here: Home/ Articles/ Work Abroad/ Blogs/ The Fix-It Mentality and Local Businesses in India

The Fix-It Mentality and Local Businesses in India 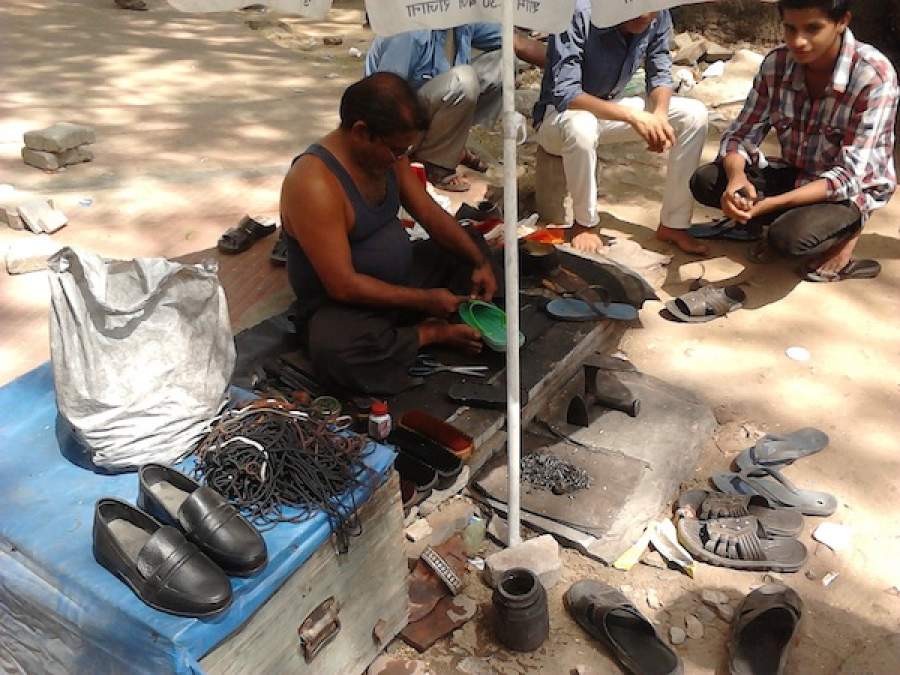 The other day I enlisted the services of a cobbler.

That’s right, a cobbler. You know, a person who fixes shoes?

It’s not something I foresaw myself doing, ever. Where I come from, shoes that malfunction are delivered straight to the garbage can or offered a reserved space in an abandoned box in the garage. I would warrant a guess that cobblers, if they do exist in Canada, aren’t seeing booming business returns. I think I can speak for most North Americans when I say that we tend to have an “out with the old, in with the new” mentality when it comes to fixing things.

Not in India. All I had to do to repair my dearly beloved sandal was walk out of my house, hang a left, and take about ten steps down the street to the corner, where a pudgy bald man was sitting cross-legged on the ground beneath a faded black and white beach umbrella. He sits there every day, surrounded by a scattering of peculiar tools and rows of black men’s shoes in all states of disrepair.

I pulled a gold-sequined chappal out of my purse—the right foot of my favourite pair—and shoved it at him as I towered over him. The sparse hairs on his head revealed beads of sweat that had formed en masse in the heat of the morning. He nodded as he took the sandal, eyeing the separated toe strap. I waited, starting to feel sweaty myself as I watched him begin his operation of forcing the strap back into position and gluing it down. Once the glue had hardened, he inserted a small tack through the toe strap to keep it in place. Then he handed me the finished product, good as new. After some gesturing to divine his fee, I handed him 20 rupees—approximately 40 cents—and went on my way.

The satisfaction I felt in knowing that my precious sandal had been fixed was priceless and it had me thinking about some inherently Indian mentalities. Firstly, nothing is ever broken beyond repair. One needn’t go very far to see this philosophy in action; the streets themselves are scattered with ramshackle cars, sputtering autorickshaws, WWII-era trucks, skeletons of motorcycles and rickety scooters that have been on the road since the scooter was first introduced in India in 1975. It’s nothing short of a miracle that these vehicles don’t crumble to pieces—actually quite often they do, but I can guarantee it’s no cause for their drivers to give up on them.

Talk to anyone though, and you’ll realize that this mentality extends to cell phones, computers, household appliances, clothes and pretty much anything else that is capable of failing. You know how MacBook power cords are notorious for dying? I once witnessed my very own boss call in an electrician to fix his fried cord—and it worked.

The second mentality is that each and every business is a local business. The cobbler is just one of millions of humble entrepreneurs who set up shop rent-free on the roads by claiming a corner or setting up makeshift stand. I neglected to mention that in the 10 steps I took towards the cobbler on the corner I passed a chai vendor, two or three ice-cream peddlers, a paan stand, and a guy selling golf shirts encased in plastic arranged in neat rows on a blanket on the ground.

Here, nearly every business is independently-owned and operated; men have the right to eke out their own living wherever and however they see fit. It’s a stark contrast to the rest of the world, where the consumer cultures tend to favour huge conglomerates and big-box chain stores. The little guy never stands a chance when there’s a Walmart. I can’t help but think that in some ways, India is way ahead of the West.