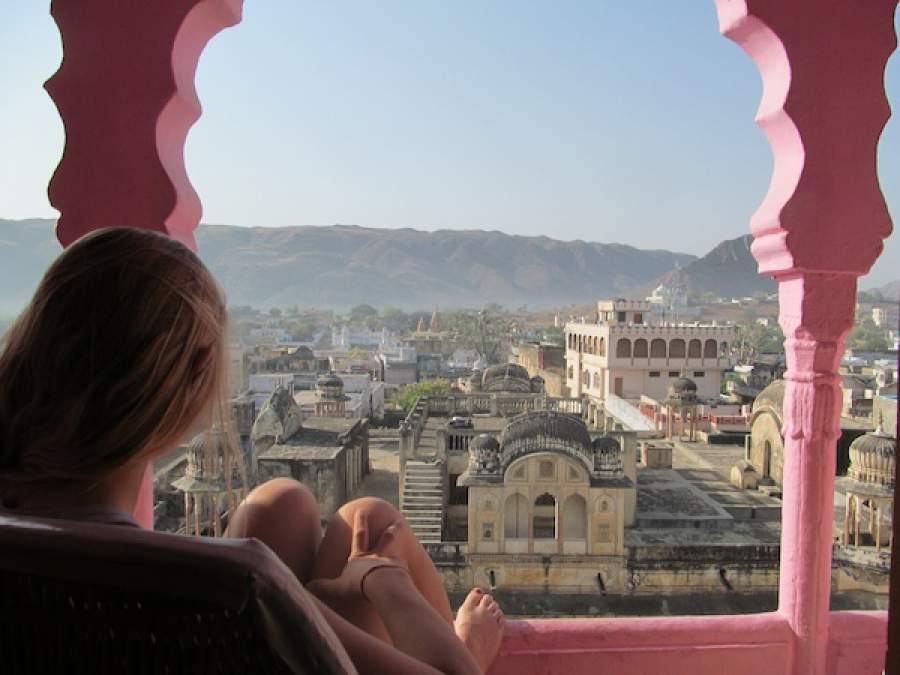 A late-night trek in Pushkar allows travellers to discover India's spiritual side.

After returning to our hostel, a psychedelic-inspired haveli run by an affable pothead who called himself Electric Baba, we immediately found ourselves splayed in the high-backed, barrel wicker chairs on the balcony adjacent to our room. The heat of the day had impressed itself on our skin, inducing a state of dazed exhaustion, and the unforgiving charlatans of the city had had a similar effect on our spirits.

We mulled over the day in Pushkar: moving lethargically along the sand-blown streets in the heat, only to be lured into the shops by tempting arrays of delicately painted trinket boxes; vividly patterned textiles; and faded leather shoes and chappals.We remembered the deceitful priests who had imposed their services upon us at the famed Brahma temple, the sharp 12-year-old boy who had managed to smooth talk us into buying ghee for him to take home to his mother, and finally, our desperate retreat up Ratnagiri hill on the outskirts of town, to the temple of the goddess Savitri, Brahma’s wronged wife.

We had just returned from the trek to the temple. It was early evening when we’d decided spontaneously, on account of our markedly deflated morale, to withdraw from the city. We’d climbed up the precarious, cobbled hillside trail towards the small temple, while rambunctious monkeys skirting the trail’s edge ignored us, caught up in their own play. We were late to start the trip; the sun was setting and already those who had reached the top were cautiously stooping to make the descent over the uneven steps.

At the top, our strained breathing subsided and we stood in silence as darkness fell over Pushkar. Noise floated up from the streets below but the sounds were muted, as though we were hearing them while asleep. For once there was no one around, save a few of tardy devotees.

I thought of the centuries’ worth of people, westerners mostly, that had been coming to India to in search of spiritual consolation. Could they really find what they were looking for here, in a country of people with seemingly bottomless pockets? Or was it that India’s once legendary sanctity had been eroded away altogether? After our day of shunning droves of outstretched hands, it seemed as though Pushkar’s virtue had already been whored out.

Settled on the balcony, we resigned ourselves to the view of the city under the veil of the shifting weather. Thin clouds slid down the mountains surrounding the town and the air became opaque, concealing the lit pathway that snaked up the hillside we’d come from. For the first time in India, I noticed the unmistakeable smell of the dehydrated earth before rain. With my legs draped over the edge of the balcony, I marvelled at the feeling of the cold raindrops on my skin and listened with contentment as the intensity of the shower increased.

Then the power was cut and the scene we’d been captivated by was lost. Yet, at intervals, we caught a momentary glimpse of the entity of domed roofs, arched turrets, and staved houses lit up before us as lightning cut through the sky. Gradually, the customary din of motorbikes, dogs, and cows gave way to the reverberation of thunder. Then, silence. The city was kneeling. Perhaps the mysticism of India hadn’t been lost after all.

For over 50 years, AIESEC Canada has been facilitating their Global Internship Program in Canada and abroad for companies, students and recent grads. AIESEC Canada is one part of the world’s largest student-run organization and is based out of Toronto. For more information please visit www.aiesec.ca.