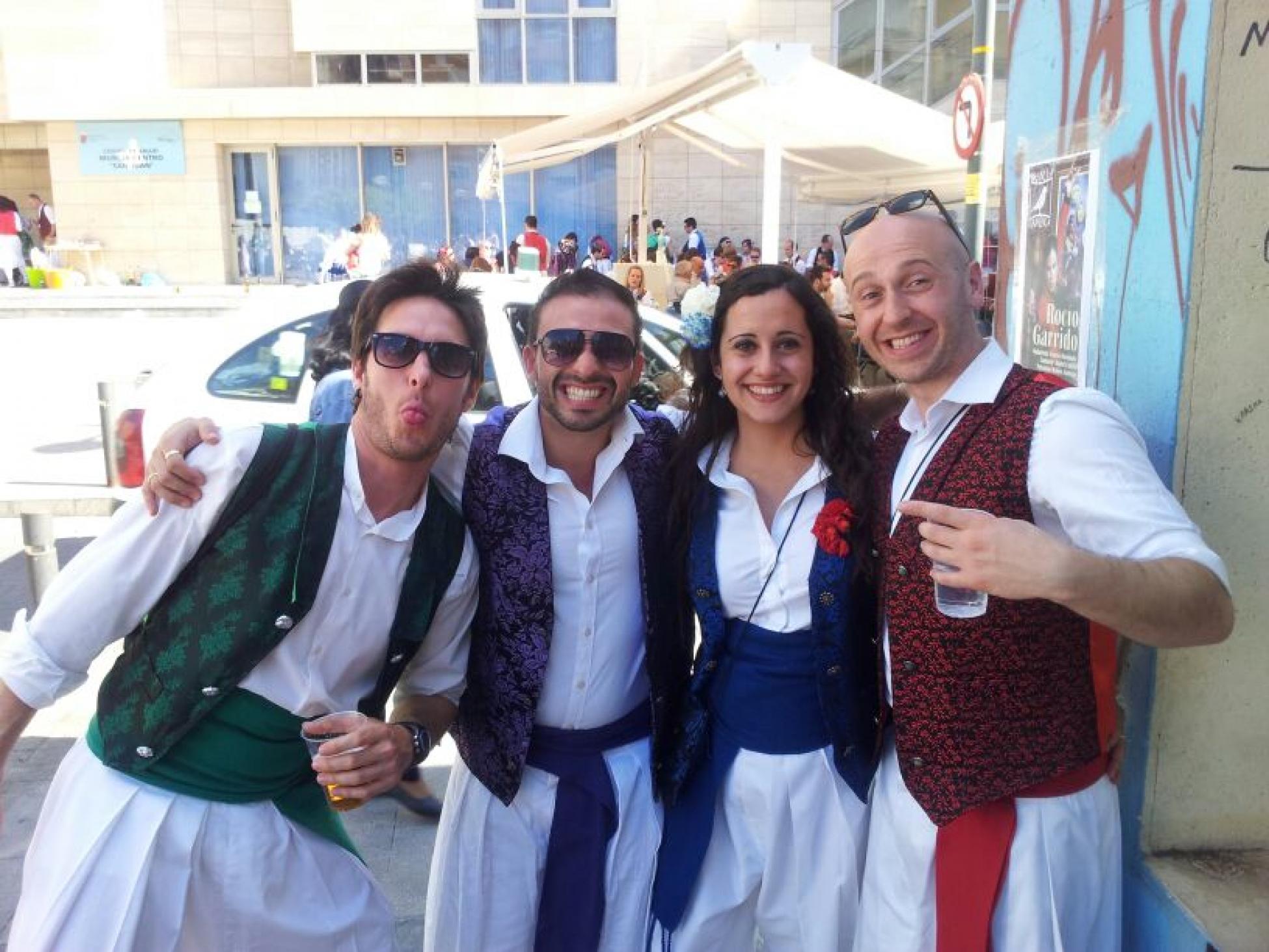 Andrew (right) poses with friends at a Spanish fiesta.
By  Andrew Scott

"The things that happened could only have happened during a fiesta. Everything became quite unreal finally and it seemed as though nothing could have any consequences. It seemed out of place to think of consequences during the fiesta."  - Chapter 15, The Sun Also Rises, Ernest Hemingway

Just how iconic the Spanish fiesta is, I don't need to tell you. The word conjures images of bulls careering down streets, dark curls kept in place with red carnations and wine flowing from cornucopias at a bacchanalia. All right—that last one owes itself more to the wonderful Greeks, but the imagery stands. The imagined fiesta is a rip-roaring blowout! An Eden the Bible couldn't have imagined. And I’m happy to report that the image is not too far from the truth.

People forget just how enormous Spain is. I could supply you with squared measurements and poetic comparisons but, for brevity's sake, it'll suffice to say that Spain is massive. And every part of it is equally as distinct and proud of its own idiosyncrasies (and especially its food) as every US State. Each region, city and village has its own culture and each culture has spawned a fiesta distinctly of its own as well. It’s so big, so mottled with festive gems, that making a plan of which and when to attend becomes a pretty stressful activity. There literally just isn’t enough time to fit it all in and spend time speaking to the loveable lunatics propping up the bar below your flat.

In the region of Murcia there's the tambourine-banging fiesta of Mula, the wine-throwing fiesta in Jumilla and the glorious olive-stone-spitting fiesta of Cieza but in the city itself there's something different. Bando de la Huerta celebrates the enormously rich and enormously enormous countryside that surrounds the city and floods it with the kind of organic produce, which might feature in a Jamie Oliver wet dream. It takes place just after the Catholic melancholy of Holy Week, where the faithful don colourful costumes and carry enormous wooden barges with biblical statues on top in penance. As sombre and saddening as it is there is an unmistakable undercurrent feeling of the calm before the storm. And it really is. The moment the statues are put away the only rainbow in sight is that of the multitude of colourful flowers, floats and dresses which delight, meander and flutter through the streets respectively. The locals thrive in the weeklong "Spring Festival" under the not-yet-baking sun with music, dancing and laughter.  This is Murcia.

During Bando de la Huerta everybody gets dressed up in variations of the original farmer's attire—the whole spectrum of colours and patterns—and steps into the streets to eat and drink and spend time with friends and family. . .and, this year, one slowly reddening Englishman. Where the locals tanned I burned, where they danced, I staggered and where they sang, I grinned stupidly.

But I took part. I dove into that day like an emancipated monk with a coupon in a brothel and I soaked up as much of it as I possibly could. Food and drink and singing in the street. I may not have “belonged,” but I didn't know it and, if the locals did, they certainly didn't show it. Friends and strangers alike took my hand, slapped my back and made me feel like I’d always known them and we’d been co-conspirators in something gloriously naughty in a past life. Open, friendly, and fundamentally predisposed to finding the best in a situation; these are Murcianos.

As always, that’s my point. I could give you a step-by-step account of what happens at the festival, but there are guides and dreadlocked hipsters writing on their gap years who are more than willing to do that for me. I'm not that kind of writer. (For one part, I'm bald.) Secondly, if you're reading this then you’re either a kind friend/family member or you're interested in travelling and living abroad. In which case, if I may, I’m just going to give a bit of advice: dive in. Dive into every opportunity you possibly can. Every fiesta, every dinner and every relationship, romantic or otherwise.

Get involved and enjoy the people because the memories of good people will be the last that your quavering consciousness will remember when you’re old and decrepit and insisting to future generations that these were the best days ever lived. And, finally, remember Hemingway's words because, in the greater scheme of things, you're here for an absolute blip of time and sometimes, just sometimes, it's worth dealing with the consequences later.