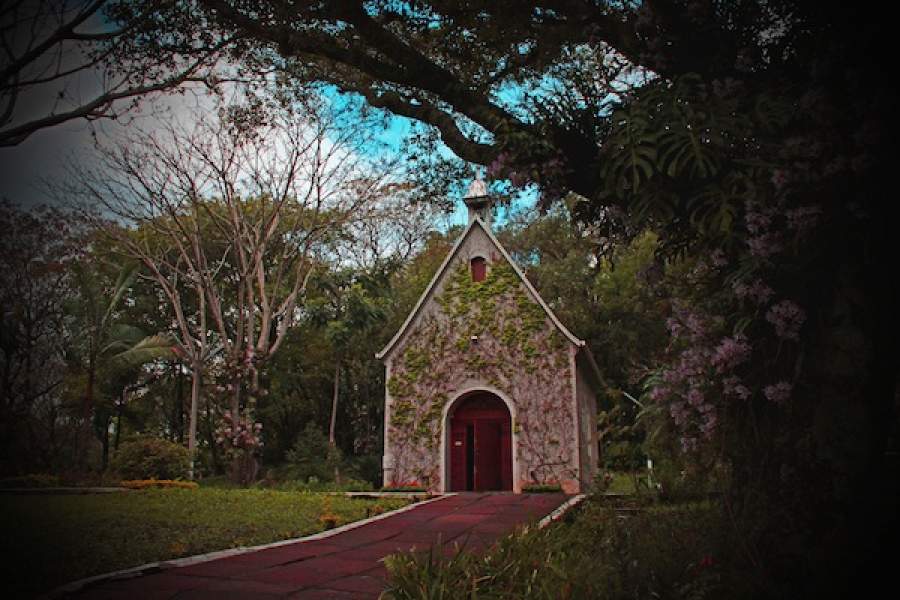 A beautiful German schoenstatt sitting along the outskirts of Santa Cruz do Sul, Brazil.
By  Samantha Phelan

An intern's first week in Brazil.

I started my first day of interning yesterday and it involved going into the various classes, introducing myself and telling them a little bit about where I come from. I began most classes asking the students what they knew about Canada before I got into my depiction of it. The most common answers were hockey, cold weather, maple syrup and Justin Bieber. This was quite funny, because while all of these answers are indeed Canadian, I wouldn’t say that they fully encompass Canadian life. (Later in the class, after giving a brief introduction about myself, students were encouraged to ask me questions and one of the students asked me what I thought of Brazil before I came here. Touché my friend, touché.)

What I have grown up knowing about Brazil is that it is a large part of South America, it has fantastic soccer teams, beautiful female models and in one of their biggest cities there is a large religious statue up on top of a mountain overlooking white beaches.

After some much-needed research, I discovered that Brazilians speak Portuguese, not Spanish; their capital city is not the one most famously known by tourists (Rio) but in fact Brasilia; they are just as crazy about soccer as we are about hockey; and while the women here are very beautiful and have fantastic footwear, they are not walking around in Victoria Secret lingerie with size zero waistlines and looking like bronzed goddesses.

I tried to go into this internship with an open mind and to see the positive in welcoming all challenges or cultural differences. I was coming to their country, and despite not needing to know Portuguese for my internship I have been taking every spare opportunity to learn as much as I can. I hate feeling oblivious when I am in another country where the main language is not English. Too many times have I been travelling and watched as tourists get frustrated with the staff at a store or restaurant because they cannot understand what they are trying to say. It makes absolutely no sense! I rarely see foreign visitors come to Canada and speak only their language to waitresses, or bus drivers or random people on the street. I understand that English may be a more common language but that doesn’t justify ignorance to a country’s first language.

Santa Cruz do Sul itself is a very unique city because while it is in a more rural area of Brazil, it is full of cultural color and charm. It has a large German population, which means that food traditions and the hours of operation of some restaurants are influenced by European culture. At the same time, the weather, fashion and other types of food can be uniquely Brazilian.

Additionally, much like parts of North America, there is a difference in dialect across the various states of Brazil. As I have been learning Portuguese I often hear two versions of the same word—one being the word most commonly used in Rio Grande do Sul and another which is more common in the big cities like Sao Paulo. It makes learning that much more challenging but I’ve found a good mobile app that has been helping me learn basic Portuguese along the way. Pretty cool.

The people here have been awesome thus far. In most cases, people start out very friendly and once they realize that I am foreign and do not speak their language very well they seem that much more enthused about my existence. I have witnessed full-fledged yells of excitement by the cashier at the supermarket once she realized that I had no idea what she was saying to me. Small things like that make up the stories that I will end up telling about my experience living in Brazil years down the road. They are very welcoming and hospitable to this Canadian girl. That’s my identity here; the Canadian girl and I wouldn’t have it any other way!

My next few weeks include a bit of travel around Brazil so that I can get to know the country a little better than I initially thought. If someone had come to Canada to live for 10 weeks, I wouldn’t want them leaving Canada and still believing that Justin Bieber is the sole face of our country, so I figured it was only right that I try to debunk some of the misconceptions that I have had about Brazil.