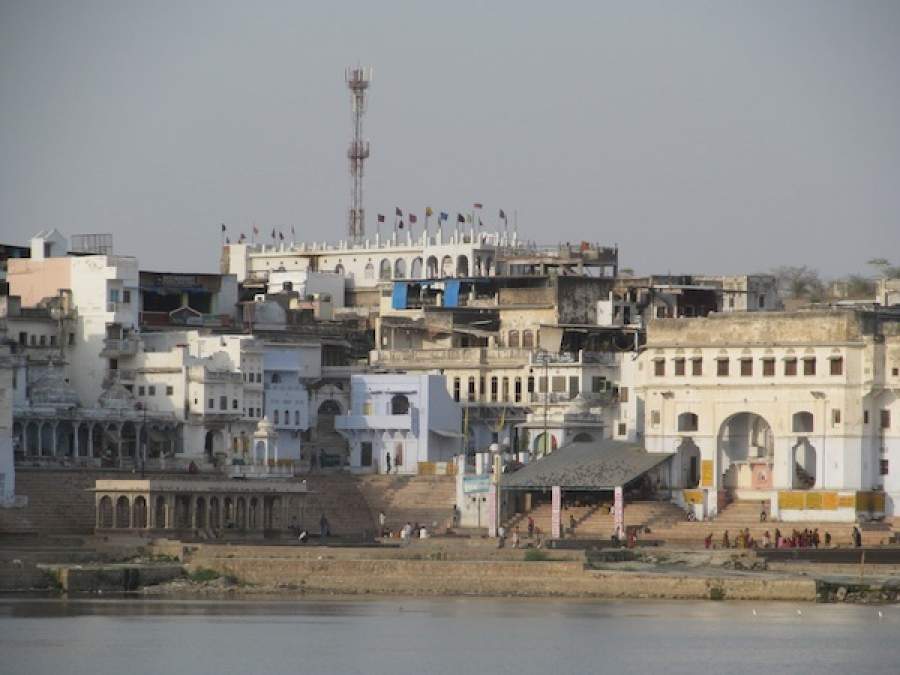 And in Pushkar, no less – where the dolloped roofs of hundreds of bleach-white temples protruded from clusters of houses towards the vast sky; where sadhus with gnarled hair could only be distinguished from washed-up hippies by their weather-beaten dark skin and unwavering countenances; where women with sequined orange saris pulled over their heads walked slowly alongside sun-scathed tourists in baggy pants and Ray-Bans. A town whose maturity is avowed in the Ramayana itself, Pushkar has regressed from a favoured site of Lord Brahma to a sleepy hollow in the hills. By all appearances, it’s a town equally revered by devout Hindu pilgrims and stoned squatters.

Initially, I think we felt somewhat smug after managing to shuck off the persistent, self-professed Brahmin student-cum-guide who had thrust fragrant flowers and crumbling sweets into our hands at the foot of the famous Shree Brahma temple. Once inside, we asserted in a most polite, Canadian way that we wouldn’t require a tour guide; moreover we had no money to pay him. Still he’d insisted, hastily ushering us around the temple as he delivered several uninspired, Wikipedia-derived monologues. We lingered at the gold-encrusted blue pillars and traced our fingers over the lines of marble carvings honouring the departed, if only to test the limits of his patience.

Upon leaving the temple, he motioned for us to follow him to the holy ghat, where those that drop their flowers at the water’s edge are assured good fortune. It was then that we made our bold move: we appreciated the information, we wouldn’t need his assistance any further, we wanted to go at our own pace. Ignoring his retorts and his childishly dramatic show of displeasure, we turned and marched away, clutching our bundles of flowers.

Giddy with our freedom, we proceeded down the shop-lined street towards the steps of the lake, stopping along the way for repulsively sweet snow cones and shaking our heads in refusal of the vendors that held mirrored trinkets in front of us as we walked.

We had our guard up when we reached the lakeside, banishing other overzealous guides as they commanded us to follow them down the dusty marble steps to the water. But, as we removed our sandals we were caught up in the disordered horde of worshipers and we suffered a momentary lapse in shrewdness. Two white-clad Brahmin priests pounced, gripping our forearms and leading us to separate areas on the steps, where they forcibly bestowed us each with a plate sprinkled with uncooked rice and smeared with Bindi dyes. Before I knew it, I was repeating a mantra with the beady eyes of my priest on my back. I looked out begrudgingly out towards the water.

I could tell from his lack of investment in his own words that he didn’t care to bless me with any of these things. He was thinking only of the “good money” he might receive from me. So I waited, my ears perking when he so opportunely paused after noting that all people who visited the temple—both Hindus and foreigners—made sizable donations.

I gritted my teeth; three months’ worth of anger welled up in me as I felt once more that in India, I was a walking substantiation of wealth. I remembered every auto rickshaw driver who had tried to squeeze me for extra rupees, the plethora of disheveled beggars with their desperate eyes and grabbing hands, the shop keepers and their relentless, emotionally-charged bargaining. Were so many people entitled to the money I had worked for? Or was I just stingy? Did this aggressive priest—touting his foreign religion in exchange for cash—deserve something from me?

I looked at him defiantly as I said it, trying to stifle a smile as I listened to his litany: I was selfish, I had so much and gave so little and then the crowning blow—I would have bad karma!

When I refused to concede, he banished me to the edge of the lake, where I regained my composure as I dropped the heads of the flowers one by one into the water. That man hadn’t succeeded in taking my money, but he had succeeded in making me feel guilty, if only for the fact that in life, I had been born with more than most. But as my flowers bobbed and floated away, I sighed. I wouldn’t pay for my salvation.

For over 50 years, AIESEC Canada has been facilitating their Global Internship Program in Canada and abroad for companies, students and recent grads. AIESEC Canada is one part of the world’s largest student-run organization and is based out of Toronto. For more information please visit www.aiesec.ca.