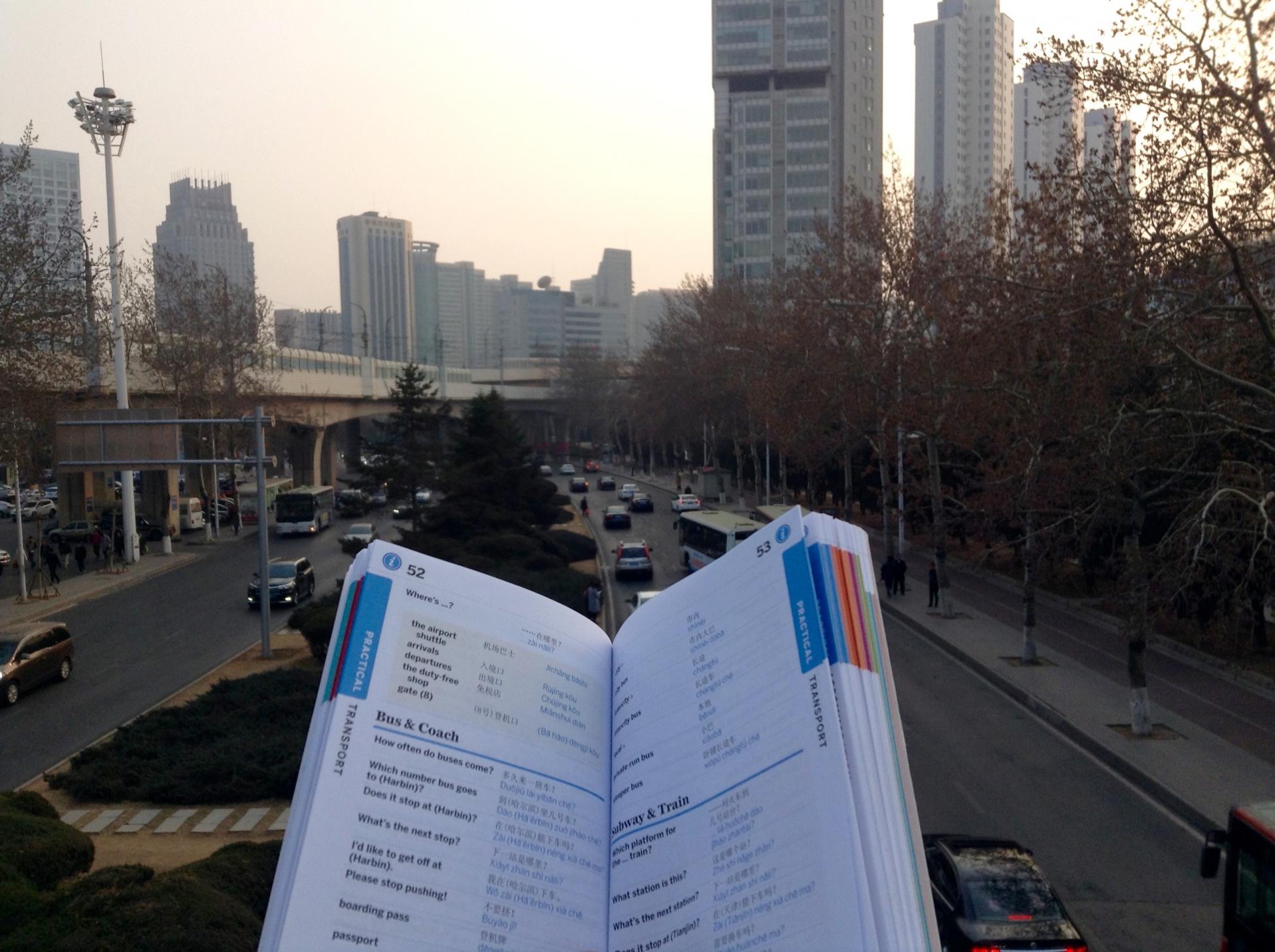 Finding bathrooms and making small talk—all part of picking up Survival Chinese (or, in my case, making a fool of myself).

The Lonely Planet Mandarin Phrasebook & Dictionary sticks out of my back pocket. Pin Yin has been decoded during a few language classes, and some survival vocab arms me with the essentials. Time to put it all to use.

All my aspirations of being a language prodigy disappear the same time I ask a mall worker where the bathroom is and get a confused shake of the head in return. Bathroom, or as they usually say in China cesuo, toilet, is a very useful word to know. And I have to find one, fast.

Finally, when all hope seems gone, I cave and go with a term I’ve recently heard. “W.C.?” I ask in English. He points me in the right direction.

Round two. I’m in a restaurant that has a menu with pictures. Point and say, “Wo yao zhe ge,” and things are looking good. Chinese isn’t so hard. I got this! But I don’t want the hot water that everyone else in China drinks. I want cold water. “Bing shui,” I order.

Blank stare in return. Okay, my tones are wrong. Once more with different inflections. The waitress is looking at me like I’m requesting that the chef sprinkle salt on his leg before he cuts it off and serves it. Again, I give in and resort to gestures. I make fists and hold them up while shaking like I’ve somehow found myself magically outside in the middle of winter without a jacket. “Ah! Bing shui!” she exclaims, nodding as if that’s not what I’ve been saying for two minutes straight.

Round three. Starbucks, a Western place for a third attempt. I’ve chatted with one of the baristas a few times, so I’m not going in cold. Okay, so I said “Hello” and “I like coffee” while she smiled and nodded without comment. It’ll be different this time, though. I’ve worked out asking her how her day is going, and then telling her that I have a lot of homework to study for Mandarin. I order. Hand over the 32 Ren Min Bi. She hands me the receipt and I go, “Ni jintian zenme yang?” She smiles again, but this time responds with “hen hao.” Yes! I’m doing it. And then I go for the hard part. I came here to study my Mandarin. I have a lot of homework. Just say it like you practiced.

Her smile falls off her face like a torrent of snow in an avalanche. At first it’s a slow dropping at the corners of her lips, but they quickly gain speed and become a full-on frown with a wide-eyed look of disgust tossed in there for added bonus. Sirens are going off in my head, but I just smile and nod as I walk away from the counter to claim my drink.

Back at my table I pull out my notes. I’ve definitely made a mistake. I flip open my phone and look through my mediocre dictionary on it.

The language fails did not end with round four, but I’d rather not outline in detail every time I put my foot in my mouth. Nor will I tout the growth I’ve made in the years since those early days of fumbling over taxi directions.

It can be a pain to balance language learning while having an adult life; harder than it is when we’re kids.

The point is, if you’re going to live abroad for an extended period of time, put some effort into the language. Most of what linguists and scholars know about language acquisition has been learned in the last 50 years or so. As a field, the study of second language acquisition isn’t so cleanly demarcated in time, but people have been publishing on the topic since about the '60s. Since then the field of language research has been saturated by theories and names, but a handful rise to the top: Michael Long’s Interaction Hypothesis, Stephen Krashen’s Five Hypothesis, Noam Chomsky’s Universal Grammar, Jim Cummins’ BICS and CALP, Lev Vygotsky’s Sociocultural Theory, and even Steven Pinker gets in on it with his Language Instinct.

My point? As you look abroad for your next adventure, don’t be deterred by the thought of a foreign language. Don’t buy into the notion that just because you’re not a child that you can’t learn a new language. All of those theories out there try to analyze and label what people already do. And people are learning new languages.

Yes, we are largely primed to pick up language from the day we’re born. Yes, it can be a pain in the butt to balance learning a language while working and having an adult life; harder than it is when we’re kids. Sure, some ways are better than others. As a student, it’s your job to figure out how you learn best and then learn.

With a buffet of second language acquisition theories to choose from, rest assured that no one has it all sorted. If you have a teacher, time, desire and patience you can do it. And that patience isn’t meant as you waiting to get it right and then start speaking. Heck no! Learn three words and start using them immediately. Learn three more and keep it going. Don’t be afraid to get smirked at, resort to gestures, or even use pidgin English in your crusade. Don’t stop.