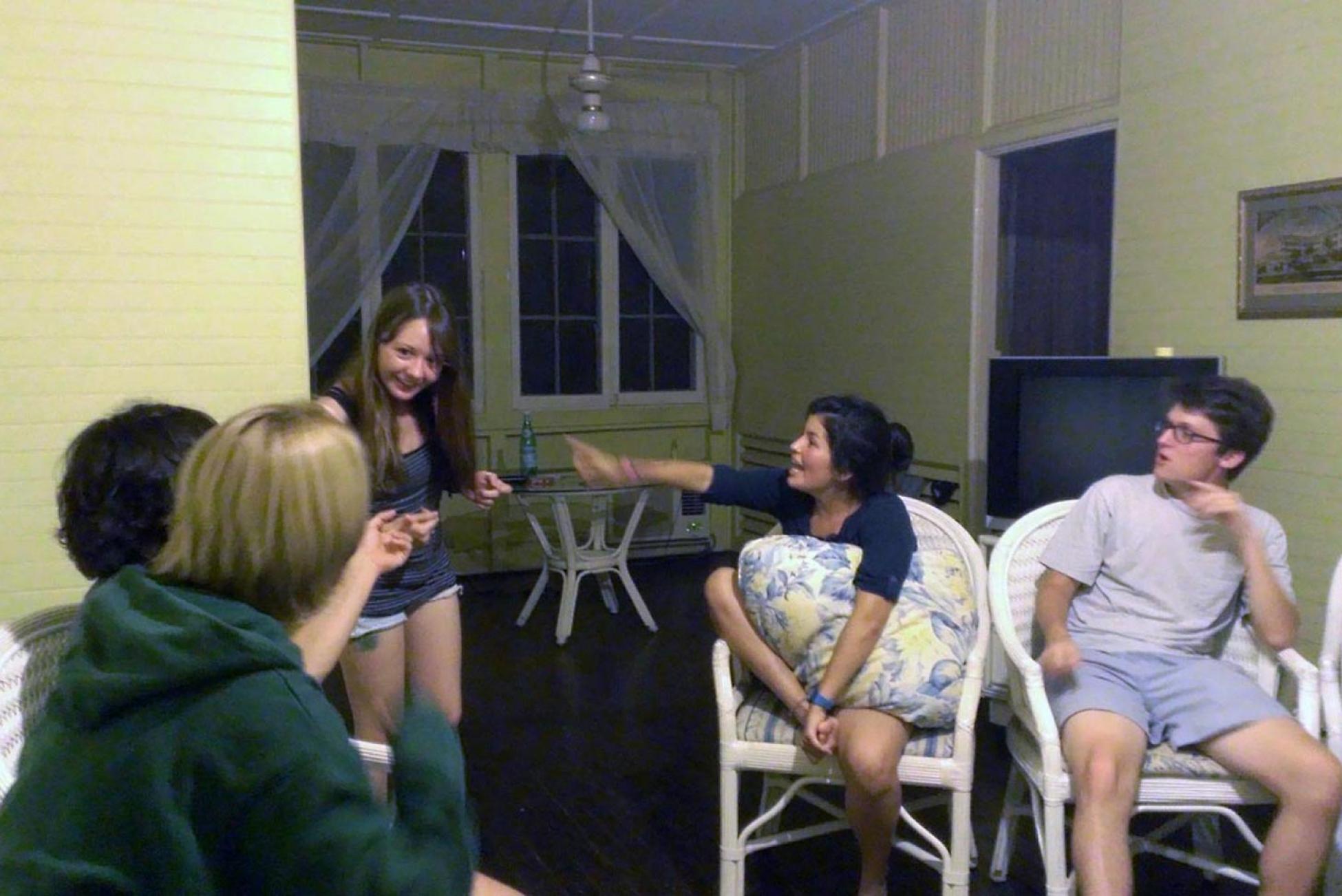 Game night began with charades in the villa on this July evening.
By  Elizabeth Tokarz

After returning to Yale this Fall, Elizabeth reflects on her summer spent in the jungle.

Last year, the last thing I wanted to think about were the insects living with me in the freshman dorm. However, since returning to campus for the fall semester, I notice them and I usually want a closer look.

At the Peabody, the university’s natural history museum, a travelling ant exhibit displays pictures from ant hotspots around the world. In the images from Panama, a man climbs a tree, leafcutter ants tirelessly march and a pressed sample of the wide-thorned acacia species hangs alongside them (the wide thorns are where the ants live). I elbow my friend and fill him in on the details of what goes on outside the camera frame.

Fieldwork either can be frustrating or can reveal unforeseen spectacles. Scientists are observant and innovative people who run experiments. They can’t be afraid to fail, because there is a lot of trial and error. That is what I expected to learn and that is why I applied to STRI’s REU program. I did not guess that the experiments would go beyond scientific.

We were the pioneers in the first official year of the Smithsonian Tropical Research Institute’s Research Experience for Undergraduates (STRI-REU) program. I lived in a house with 10 other STRI-REU interns. Even though our schedules waxed and waned depending on the project stage, we were constant companions.

Never having cooked for myself before, I watched the others, asked and learned. I did my fair share of experimenting, pouring mini M&Ms into the Blondie mix, concocting bananas and tortillas into a frozen dessert, substituting cumin for coriander and pineapple juice for oil. I’m not saying it always worked the way I imagined it would, but the trials were numerous and enlightening. While my fall classes are in full swing, the meal plan may be restricting, but then again, so is my free time.

I had hoped to practice Spanish in Latin America, but I never expected to live with native Spanish speakers who would lovingly correct me. They did not laugh at the mistakes of the English speakers, unless an unusually obscene phrase had slipped out because of a confusingly similar pronunciation. As I went along with my daily life, words so common that I had never learned them cut me off midsentence and I learned the new vocabulary. Thunder, lightning, hard, soft, sink, don’t feed the agouti or the cat. We had a great study group going. I knew more Spanish than some of the others going in, but everybody learned something. I learned enough new words to fill up the loose-leaf sheet that we taped to the wall by the kitchen table. But mainly, the language rolls off my tongue more easily, according to last semester’s Spanish professor. I am more inclined to continue practicing and erring with my suitemates and other Spanish-speaking friends.

On the first weekend in Gamboa, some neighbours turned up the car speakers and blasted dance music across the open-walled garage. Part of the playlist was four-year-old top 40 American songs, but most of the playlist consisted of merengue, reggaeton and Colombian salsa. There was a good-sized Colombian contingent and thus Systema Solar, Bomba Estereo and ChocQuibTown were among the sounds of the evening.

During my first year of college, I had attended casual dance lessons and participated in impromptu dance parties to break up long nights of studying, but it seemed insignificant when the Colombians explained their culture of dance: everyone dances—a lot. Sidling up alongside them, I observed and attempted to replicate their fancy footwork. The stovetop and the YouTube playlists were kindled in conjunction on a nightly basis and I continued to shimmy until, by the end of the summer, I was the one who would not stop. They even spotted me shuffling through steps as I drifted off on the couch during one Mafia game night. So far this year, dancing is by far my preferred study break.

Music was a common interest with the melody and rhythm transcending language barriers. Almost from the beginning, we started brainstorming a music video of the REU interns. Maybe it was when the dark trucks pulled up to the house next door, set up a full buffet, pulled out the plastic tub of fake machine guns and started filming in the backyard that we realized we would never be able to coordinate all of us at once. Later it turned into a lip dub. Eventually, we settled on penning a parody song. Enrique Iglesias’s Bailando had first blasted on repeat in our kitchen while preparing for taco night and had immediately become a staple. It was to be our legacy, we decided. STRI-lando.

As our day of departure approached, we whipped the lyrics together and looked for a time to sing it. Time evaporated, but one day in the last week, we decided to go for it. We woke everyone who was asleep and circled enough chairs and couches to seat us all. I brought up the lyrics on a computer screen and enlarged them, placing the screen next to the camera, and pressed record.

Here is a portion of the song. (Lyrics in Spanish with a rough translation following)

Ahora yo he aprendido, la ciencia es mía (Now I know that science is for me)

Quiero atrapar contigo (I want to capture [data] with you)

Regar contigo (Water [plants] with you)

Nadar contigo (Swim with you)

Andar con Nino en un busito loco (Ride in a crazy bus with you and our driver, Nino)

STRI-lando may be the ultimate product of our time together. The verses recall foods and dances we shared, the World Cup experience and verbs acted out in the name of science—all in the Spanish letra.

No one dwelled on it as we madly scribbled down our notes to send home with each other, yearbook-style, but it is doubtful that all of us interns will ever reunite fully. Five live in Colombia. Three live in California. Three live in the southwest. Four are from the Midwest. Coming together allowed us to become better scientists.