You are here: Home/ Articles/ Work Abroad/ Blogs/ A Job Abroad That's Not for the Squeamish

A Job Abroad That's Not for the Squeamish 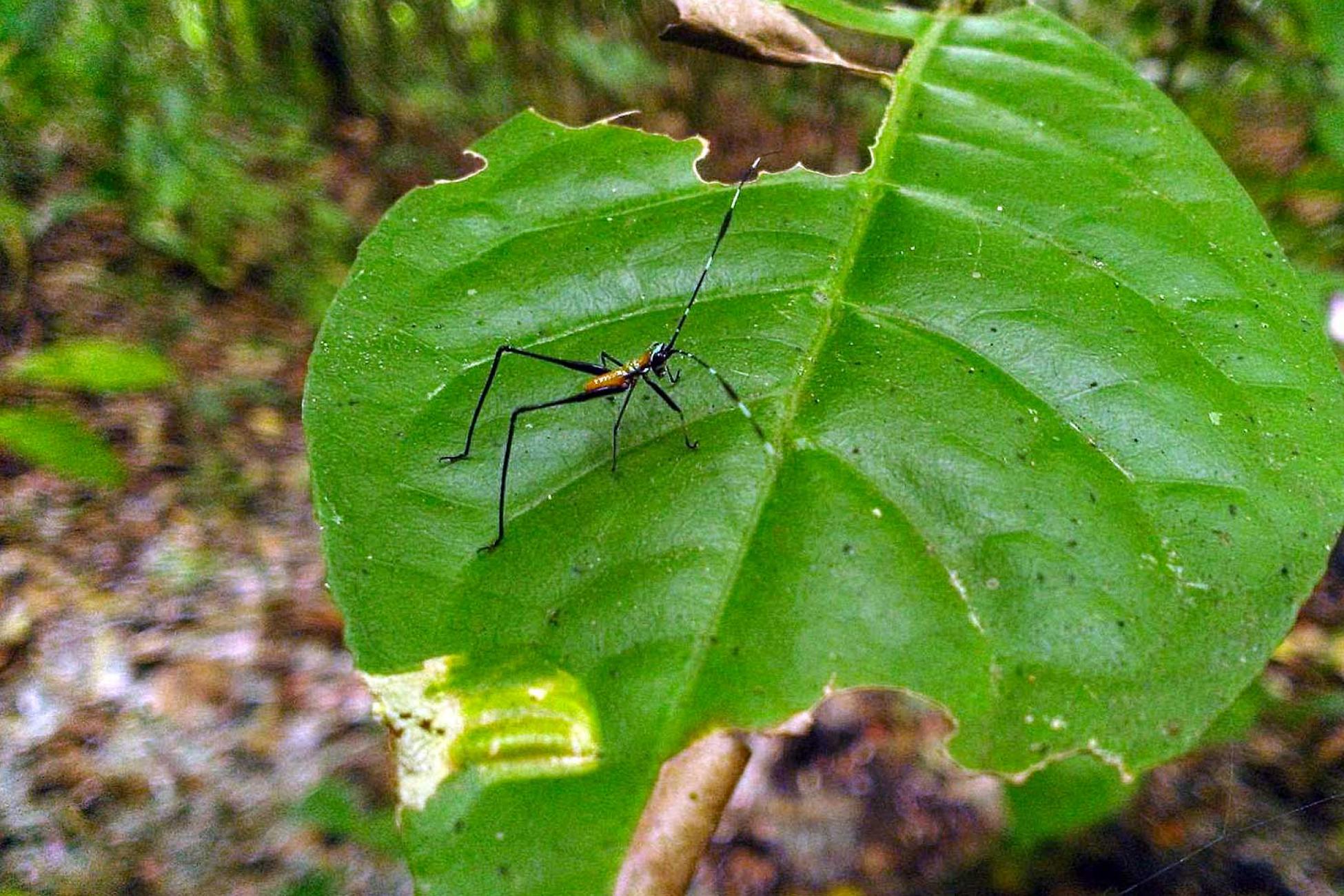 A grasshopper on BCI.
By  Elizabeth Tokarz

Elizabeth tries not to let working abroad eat her alive.

The leaves tickle me with their acuminate tips, but I am not amused. Weaving through the flora is how I find the herbivorous insects for the collection stage of the project and it is also how the bloodthirsty insects find me. Because I am searching for insects in the forest, turning over leaves and touching the plants along the trails that the insects eat, I must refrain from applying insect repellant when I go out in the field, which makes me that much more accessible.

I do not notice the carnage while in the field, but now I count 28 bug bites on my left leg, 62 on my right and 186 encircling my torso. These statistics neglect my ant stings and I don’t even want to count what’s on my arms. Each bump popped up on me one-by-one, leaving me stuck with unsolicited souvenirs. I have yet to come across a more generously endowed individual.

As far as I know, I have evaded viruses, so I try not to think about the pocks for fear of making them itch—more. Others comment on the topography of my skin: “They’re eating you alive,” “Are you allergic to mosquitoes?” “Man, I thought I had it bad.” They pity me and wonder if the annoyance is worthwhile.

As part of my job, I go on an insect safari each day. We collect herbivorous insects: grasshoppers, small metallic beetles, juicy caterpillars, geometrically patterned weevils. If it is on a plant of interest, we chase it down. The capture is not always a guarantee, however. Beetles fly away. Grasshoppers jump to an obscured location. Caterpillars and weevils fall into the foliar abyss that is the forest floor. At any given moment, many insects are visible or audible or felt crawling on your person, but they are not always collectible for our purposes.

BCI’s forest is home to alien creatures, most of which I will never see in a book or my imagination, let alone real life. Every now and then, one of these UFOs will fly past. Come to think of it, it is like being underwater, a completely different world that cannot quite be matched by a zoo. I could spend a lifetime on this task and I could keep encountering new insects.
The most memorable of these insects remind me of large, better-known vertebrates I have seen before. Can you guess what animal each insect is like?

1) Medium-sized weevils tend to compress themselves into a mushroom shape when an intruder, like me, starts navigating the inner leaves of a plant. Their four legs form a rounded stalk and their exoskeleton looks like a bump of dirt. I have learned to see through this disguise and I will collect the critter in a plastic bag, where it will soon reveal itself. When the weevil starts scrambling, its proboscis unfurls into a narrow feeler that surprisingly, doesn’t compromise its light step.

2) The metallic blue floaties look like a kayak paddle, parallel to the ground and striking a balance as the insect hovers by a tiny knot on the tree I am inspecting. Four legs angle out from behind like tail feathers. All the above are barely connected to the metallic blue body, that is half proboscis.

3) A purple bug with orange speckles comes into view as it strolls around the curve of the stem of a plant I am browsing. The first thing I notice is a flap around its neck, like a collar. I reach for it to show the others, but it broadens and unfurls a set of wings, never to be seen again.

4) With four black legs that have white bands at the joints and a blue hammer-shaped body, the bug appears to have four legs and two bodies as it begins to thrust violently against the tree. One leg twitches around in a circle like if it was under a strobe light.

5) The metallic bee lands on a curly-cued liana. That’s not the unusual part. It then grabs something to fiddle with in its arms, maybe a fraction of a twig. To accommodate for this activity, one arm remains attached to the liana while the bee slowly sinks down into a comfortable hanging position, where it could play with the unknown object in the other three legs.

I wonder what I look like to them. To some of them I must look like food. Well if they get the dinner, then I get the show.

So writing a blog post about insect bites did not help me forget their presence. I should go and smear on some more Menticol by the air conditioner to dry them out. I suppose I will be using lotion sparingly for another couple of weeks.

P.S. These are the animals I thought of, but maybe you would have imagined them differently.