A Five-Day Trek to Ciudad Perdida 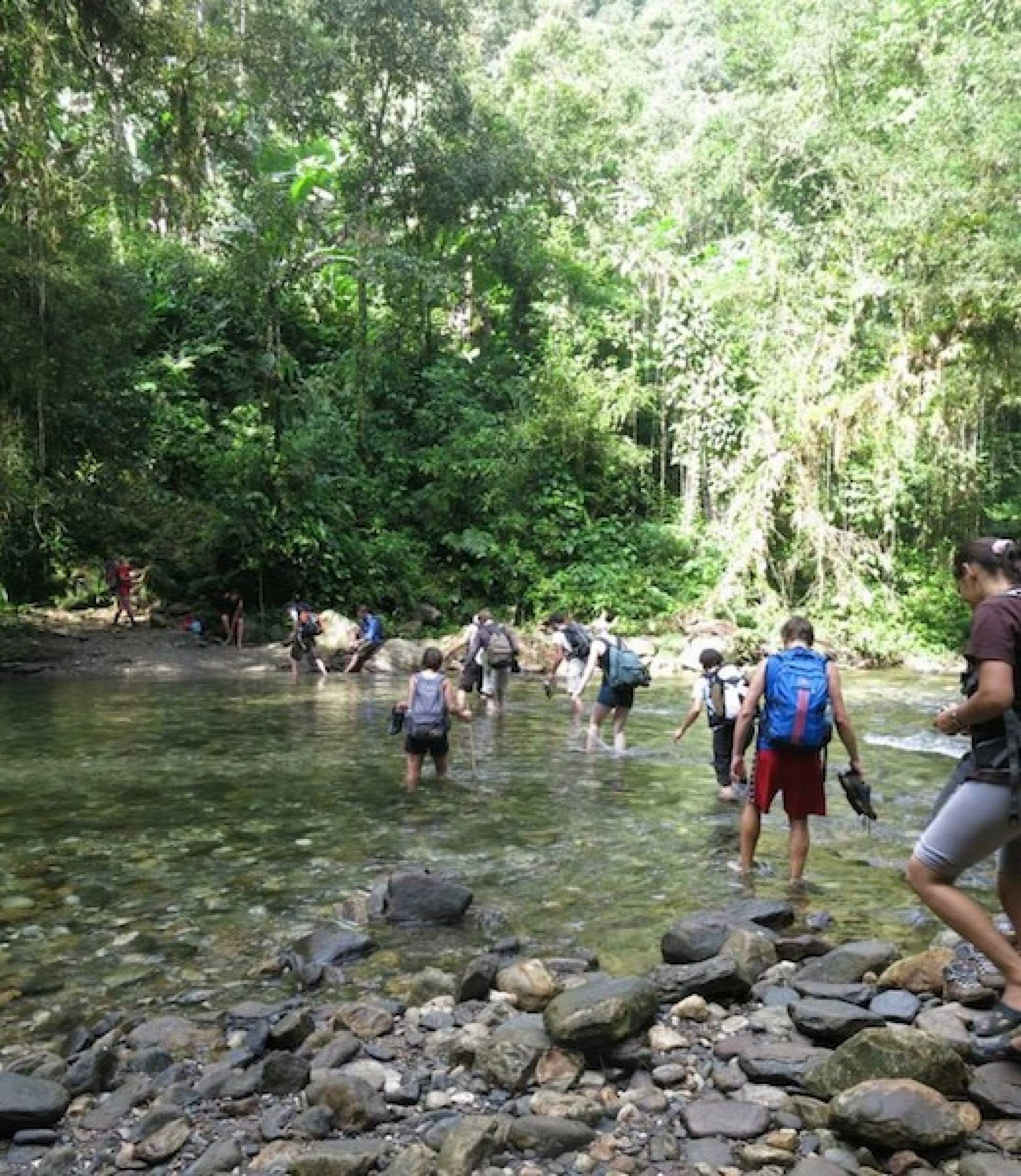 The ultimate reward for a term teaching overseas.

With the final term done and dusted, me, Nick, and another colleague Liz thought that we’d celebrate by heading to the coast for the Lost City trek. Billed as a less touristy alternative to Machu Picchu, this was something I’d missed out on the first time that I was in South America. I can now say that it’s a must. Here’s a quick rundown

We arrived at the Santa Marta office at a punctual 9.30 am, but in typical Colombian style, didn’t pile into a 4x4 until a couple of hours later. After a bumpy ride along mud track to our jump-off point, the small village of Machete, we had a chance to get acquainted with the team over lunch—two Swiss couples, a pair of Aussie newlyweds, two French brothers and a French-Chilean.

We set off in good spirits, stopping after 30 minutes to swim in a natural pool beside the path, before a hour´s steep climb. Mid-afternoon, we pulled garbage bags over our heads as the heavens opened. The next hour and a half of the trek was downhill in torrential rain and vivid red and white mud. Reaching the bottom of the valley, we found the river cutting through it was too high to cross. We spent a nervous hour under cover waiting for the rain to die down, by which time it was pitch black.

Our guide, Magali, had struck out for help and we eventually crossed the chest high water by rope, anchored by several of the locals—an exhilarating start to the trek! We resigned ourselves to the fact all our stuff would be wet for the next few days. Arriving by torchlight at our first night´s shelter, we guzzled hot coffee and a big meal before crashing out in hammocks.

A much more leisurely (and dry) day through grazing land turning into jungle full of creepers and tropical flowers. We passed the original stone road that joined Teyuna (the lost city) to the coast. It’s incredible to think that people regularly made these journeys on foot. Making good time, we arrived early, ate a big lunch and spent the afternoon drying off our clothes and napping.

With an early start and a quick pace, mostly downhill, we arrived early at camp three. After a snack we headed straight to Ciudad Perdida. To get there you have to climb 1200 near-vertical stone steps, a challenge in itself.

When we reached the top, we were rewarded with an incredible scene, though. Something this trek definitely has over Machu Picchu is that we were the only people there. We spent a couple of hours wandering around the strange circular terraces and steps perched fantastically high amongst the jungle, with explanations in Spanish by our guide (all those Spanish lessons paid off!). With group photos in the bag we headed back down to camp for lunch followed by an enormous dinner—I don’t think I’ve ever eaten so well!

Heading back the way we came, it amazed me how long the downhill was when having to climb up it again. This time we had to complete two days worth of trekking in one day in order to arrive back at our first camp. We made it in great time though, stopping at camp two for lunch and a swim in the river along the way.

At several points we passed by local indigenous people (Kogis) who continue to live their traditional way of life alongside the groups of hikers who now share the thoroughfare. It’s incredible to think the ruins were only “discovered” in 1973, although in fact the Kogis must have been aware if their existence for several centuries.

Woken prematurely by another group heading in the opposite direction (how rude) we were up and on the road again heading back to basecamp. We were blessed with gorgeous weather and, with no reason the rush, enjoyed the last few hours at an easy pace, which was just as well since the steep downhill turned our legs to jelly.

We crossed the river again, which this time was a mere trickle compared to the raging torrent we’d forded on day one. We arrived in time for a delicious lunch and a beer or two before jumping back in the vans homeward to Santa Marta, feeling tired but thoroughly happy.

The trek isn’t for the faint-hearted; you will get wet, sweaty, muddy and bitten to death by mosquitoes. I’m glad we went for the five-day option—it gave us enough time to enjoy our surroundings while still trekking at quite a sharp pace. Sitting here in our hostel, daiquiri in hand following a beautiful hour-long massage I can say it was 100 per cent worth it and the perfect end to a wonderful year in Colombia!