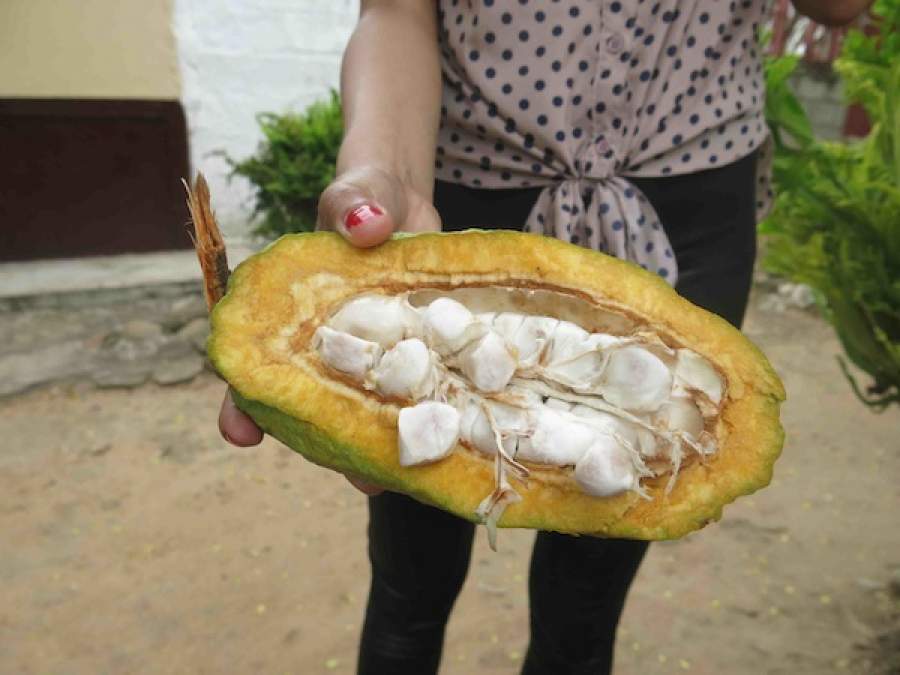 A cocoa pod in Colombia.
By  Jessica Brook

Contrary to the belief of the majority of friends and family back in the UK, Bogota is not a subtropical paradise but pretty temperate, with a fairly predictable weather pattern. It’s sunny in the morning, rainy in the afternoon. It never gets as cold as the British winters but now the rainy season is over (slightly more rain than normal) there’s been a definite change in the air.

This is all the excuse I need to indulge regularly in one of Colombia’s best comforts—hot chocolate. Colombia is well known for its coffee (and cocaine) production, but also boasts a cocoa industry although this has suffered due to the aforementioned cocaine production in recent years. It remains a domestic staple though and whilst staying with friends in Neiva over Easter, a village in the state of Huila, we were treated to the fruit of the cocoa (the surprisingly sweet casing round the cocoa seed), and saw family crops drying out in the sun on the side of the roads. Breakfast consisted of a big soupy cup of the stuff that you could virtually stand a spoon in. Bogotanos prefer theirs milky and traditionally drink it with queso doble crema (young white cheese) and bread on the side. If you’re feeling super indulgent chuck that cheese in the mug and you have a gloopy semi-melty cheese treat at the bottom of your mug when all chocolate is gone.

After talking with enthusiasm about hot chocolate to a Colombian friend recently, she encouraged me to take the next step and get myself equipped for making it at home. If you ask any Bogotano there’s a certain art to it, so after a bit of a trial and error here is my own step-by-step guide:

1. You will need milk (it comes in bags here), a special hot chocolate pan (chocolatera), hot chocolate beater (molinillo), and the hot chocolate itself which you can buy in any supermarket and comes in thick bars ready mixed with sugar (I chose ‘Bogotano’ for the funky packaging).

2. Pour 2 parts milk to 1 part water into the chocolatera along with 1 bar of hot chocolate per cup.

4. Beat the mother like your life depended on it for a frothy effect. This is achieved by rolling the beater between your palms.