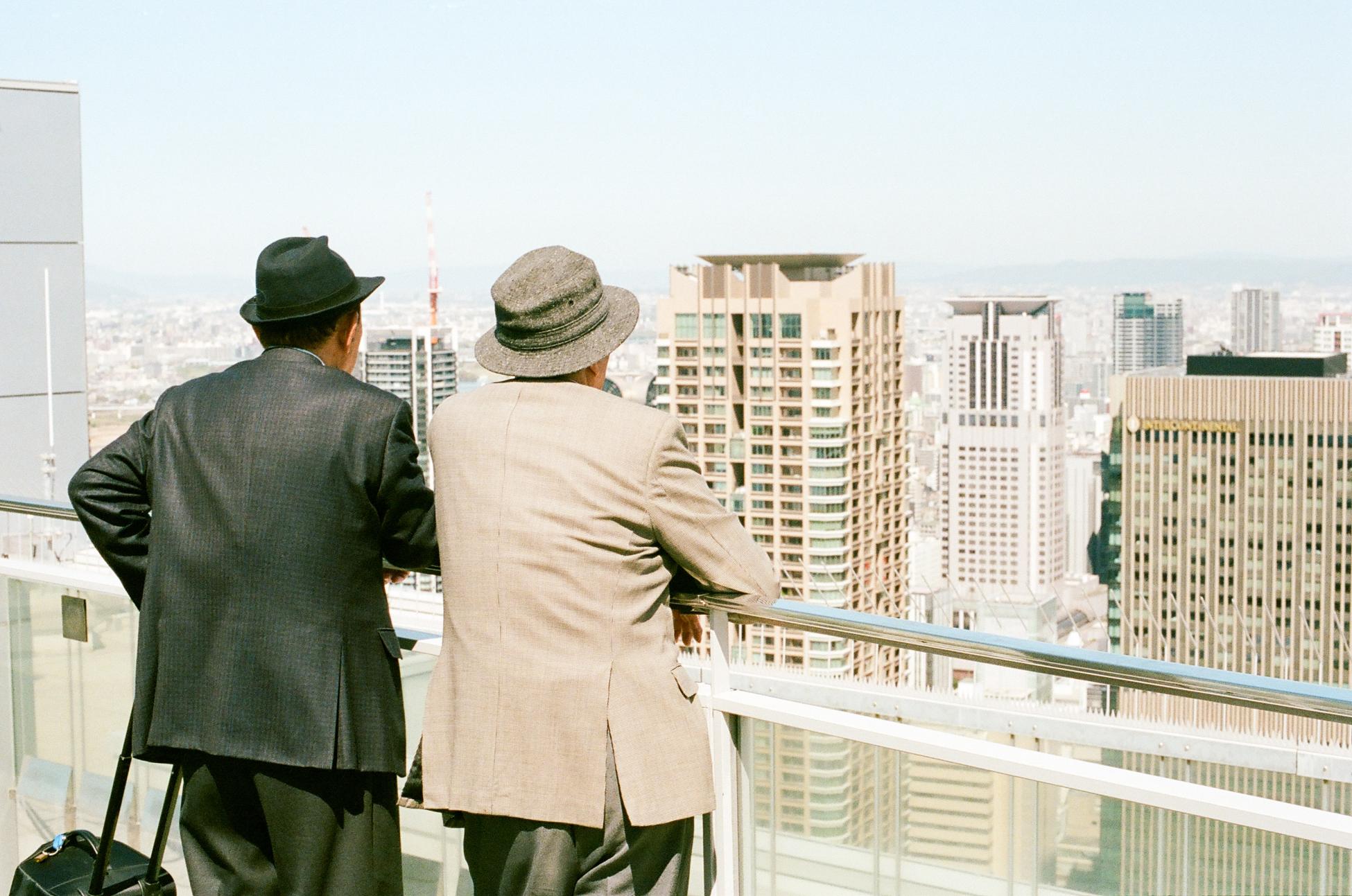 How analog photography has inspired me to live and share authentically.

With reluctance, I rolled the plastic canister toward the bottom button of her floral blouse. On a billing sheet, entirely in Japanese, she checked a few boxes and pointed at the clock. “17:00,” she added in script. She waved goodbye and smiled, my cue to leave.

The sun had already begun to tangle with the power lines above the residential Osaka streets. Neighbours gathered their laundry from their balconies. Fresh sweets from a bakery combined with the savoury scent of grilled meat at an izakaya. I pressed the button. The door slid open. The little old woman stood behind the counter, in a ray of evening light.

The bag was ready, it seemed she’d been waiting for me. No words, just smiles, as she slid me the receipt. 2,150 yen for development, prints and scans on a CD. As I fumbled with my change, she waved me away, as if to say “don’t worry about it.” Then, after settling for a transaction of just 2,000 yen, she presented me with a small photo album; a gift. “Domo arigato gozaimasu,” I said for only the second time. I bowed, and returned to the street.

On my walk back toward the guesthouse, the photos ached to be seen. Before reaching the door, I peeled back the envelope and took a peak. It was her. “Am I ready for these?”

Back on the terrace, where I’d spent nearly every night, I slapped the envelope on the table and flipped on the rope lights. From the sofa inside, Kiku practiced guitar, his only tune, a sleepy Spanish melody. Neighbours passed by on bikes. And with the first of 35 photos in hand, I drifted off.

That morning was a slow one. We’d finished cleaning around 9am. Out on the terrace, I found myself filling my afternoon by sipping a coffee and watching the neighbours go by.

“Want to go on a secret tour?” Kiku, my Workaway host asked around 2pm. We stopped at a shrine, an observatory near the airport, and finally, a racetrack.

Gambling makes me anxious, but people watching is one of my favourite activities. Instead of disgruntled alcoholics hoping to escape poverty, I found myself fascinated by the nostalgic appearance of the old men placing bets.

One in particular caught my eye. Dressed in a beige jumper with a plaid shirt underneath, and a blue bucket cap faded to pastel on his head, he observed the horses carefully, while referencing his paper, in-between. Through my 50mm lens, it was 1955.

Number 9 sprayed up dirt as he victoriously crossed the finish line.

The gambler, his face filled with wrinkles, his hair matching the white smoke at the end of his cigarette. His suit black. His demeanour red, as he watched the next race on a screen.

Platform 3 at Shonai station. Waiting for the “local” to shuttle us into the city. Hungover, on four hours of drunken sleep. I’d been coaxed out by the bright blue sky, and by her smile. One of our only foreign visitors to date had caught my eye.

Jessie, my fellow volunteer, filled the centre of the frame, but my focus drifted toward Emma’s subtle smile.

As we rode the glass escalator, between the towers of the observatory, a tunnel of white, Jessie, my fellow volunteer, filled the centre of the frame, but my focus drifted toward Emma’s subtle smile. Overlooking a sea of modern concrete structures, I watched two old men chat from the observatory's railing. “Imagine how much they’ve seen.”

Jerseys in the dingy windows: one Jordan, another Bryant. Logos of Adidas and Nike, and the Jumpman sign. A vintage cab, creeping through the pedestrian intersection. Subtle Japanese characters. Cigarettes and baggy pants, and loitering in large groups while listening to TLC. Americatown felt like a recreation of 1993.

The light turned green. Thousands rushed toward, in a never-ending stream. I’d already set my focus. I fired and advanced. It took me half an hour to reunite with my friends after they’d drifted into the sea.

“Well, I guess we should probably head back,” I said. We’d been laying in the park, watching the trees dance in the breeze and sharing stories all afternoon. She was leaving. I snapped the photo as she grabbed her bike.

An old man peddled through the eclectic jungle of streets as I strolled back to the hostel from another trip to the bakery. Red bean buns help with goodbyes. But sometimes, you find a way to reunite.

“Wait up Jess, he’s taking a photo,” Emma said. We’d rode the train to the end. A week later, we’d said “hello” again. Yellow lanterns welcomed us to a breathtaking forest. Monkeys played in the trees. Jess left. The sun began to set.

Under a canopy of bamboo, we kissed. I snapped her walking on the train tracks. A little out of focus in a hazy late evening light.

“I want to read more,” she said. At the first opening, we slipped away. I watched from afar, as her subtle smile grew with each turned page. The background blurred, the voices drifted away with the rustling leaves. An afterthought, the Torii gates.

After that second goodbye, the city wasn’t the same. The rust stood out. Alone in a crowd.

The backpackers arrived. We took a group hike. Finding comfort amongst the trees.

From the sandlot on my last morning. Kiku had invited me to play with his team on my first night. I’d just finished my inning on the mound with a strikeout.

From the third-floor landing, I watched the sun set amongst the multi-coloured rooftops, one last time.

I used to shoot digital. I used to have a desktop computer for editing video. I had a gimbal stabilizer, two cases for memory cards, five lenses, two tripods, multiple batteries, software add-ons and an external hard-drive.

My equipment always felt obsolete. I was constantly looking to upgrade. My approach, like many, was to capture as much as possible, and sort through in post. After each session, I’d spend hours editing, caking on filters and saturation. I’d upload, then wait for likes.

In one month in Osaka, I shot one roll of film. A couple of the photos were out of focus, a few others were underexposed, but every one of them is a memory, preserved, with authenticity.