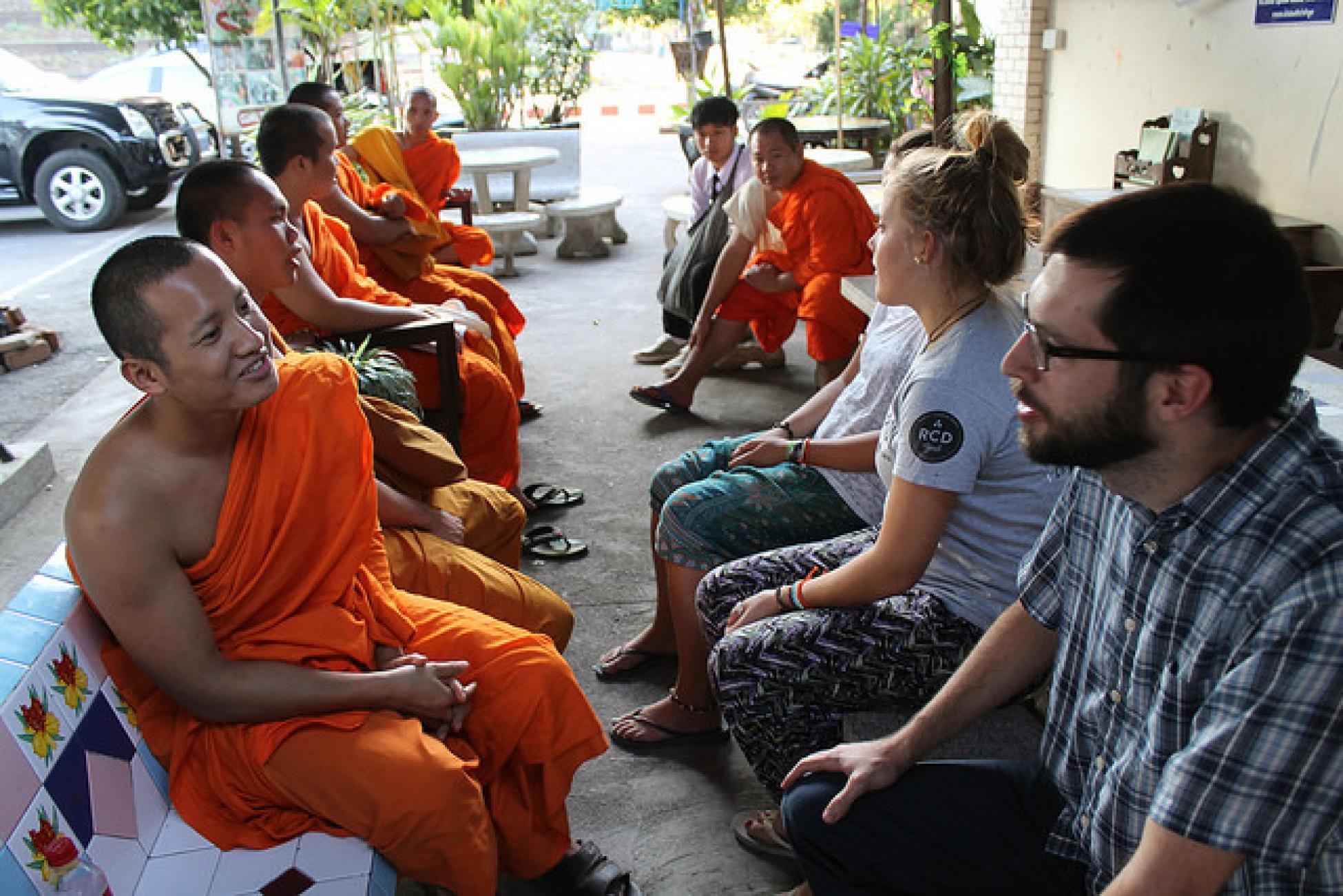 Participating in discussions with Buddhist monks teaches Kaelyn the art of Burmese conversation.

The sky outside the monastery hall turned from rust to coal as storm clouds swallowed the setting sun. Torrents of rain and strong gusts of wind threatened to pry windows from their hinges followed; a whip of lightning struck the ground just outside with a deafening crack.

To avoid being trapped by the storm, I should have gone home as soon I saw the clouds coming. However, our conversation, about the Buddhist nationalist group Ma Ba Tha and the Rohingya Muslim minority, kept me soldered to my seat as it mimicked the weather outside: complex, intense and climatic.

As the storm receded, a calming voice, soft but sure, broke through the fray of words: “I think we should try to improve ourselves instead of making others weaker.” It was far from a conclusion to such a discussion, but the statement gave everyone pause.

These unexpected perspectives—this one from a 17-year-old girl—are, for me, the highlight of every monk chat.

"Monk chats," despite the name, are open to everyone, including laypeople and foreigners. The goal is to promote the exchange of ideas and understanding amongst people with different backgrounds. Mandalay, with its vast array of monasteries and Buddhist universities makes it an ideal host; it attracts monks from every corner of Burma, bringing diverse experiences with them.

It seems monk chats have yet to become a regular occurrence in Burma, as they have in neighbouring Thailand. After getting the idea from a friend, Ashin Endaka decided to bring the concept to Mandalay, and invited me to join on three occasions. I brought the added bonus of an outsiders’ view and the opportunity for interested participants to practise English.

Delving straight into the thorny issues would be impossible; I would have to use simple questions to chisel away the ice.

While monk chats lead to lively discussions, they never begin that way. The first minutes are characterized by shyness and awkward silences; eyes instinctively darted from mine as I looked around the circle of faces. It was here that I realized that even in Mandalay, a relatively liberal city, the taboo surrounding young women and monks is very much alive. Some of the monks had been in the order since childhood and had spent little time around young women, let alone foreign ones. Even the laypeople were reluctant to speak, citing their lack of confidence in English, even with Ashin Endaka standing ready to translate. Never one for small talk, I realized that delving straight into the thorny issues would be impossible; I would have to use simple questions to chisel away the ice, piece by piece.

I soon found that even these questions did not fail to produce interesting answers. For example, the response to how and why someone became a monk varied widely from person to person. Some became novices (young monks in training) from childhood and continued into full monkhood, others joined much later in life; I met one man who did not become a monk until he was in his 60s. Some professed an early interest in Buddhism or an admiration for monks they met, others joined to receive a better education, a few joined at the behest of their elders, and some were just looking for a more peaceful life. I found their reasons to be an interesting contrast with the Catholic clergy I had grown up with, where the answer inevitably involved some type of call from God.

The same pattern repeated itself regardless of the topic we covered, whether it was monks’ involvement in politics, the new government, the state of the Burmese education system, or Donald Trump. There was never a clear distinction between the opinions of monks versus those of laypeople; even in matters of religion, views were highly individual.

While many topics produced a cacophony of conflicting viewpoints, there were a few on which everyone was united. Interestingly enough, on the question of Buddhism’s influence in modern Burma, everyone seemed to agree that while the tradition of Buddhism is strong, the actual practice is weak, almost dead in some places. However they splintered on the reasons why, some blaming modernization, others poverty, and yet others insisting the practice was never all that strong in the first place.

As people became more comfortable, a wide range of personalities emerged. There was the youthful, energetic monk who was passionate about involvement in politics, and the subdued young teacher who countered him. There was the monk who fuelled up for long discourses with gulps of green tea, and the other scholar monk who only spoke to interject short sentences packed with Buddhist wisdom. Then there was my secret favourite, 17-year-old Maybel, who defied the norms of shyness of other Burmese girls her age to offer surprisingly mature statements, sometimes in defiance of the elder men around her.

Here, in these differences, lay the beauty and importance of monk chats. In a country with 135 distinct ethnic groups and a range of socioeconomic backgrounds, cohesion can be difficult to come by. Such discussions on sensitive topics may still be a relatively new idea in Burma, where public gatherings of more than four people were banned until a few years ago. As I watched heads nod in understanding, brows furrow in consideration, and tense moments dissolve into laughter, I felt the potential of monk chats to grow into something far greater.

For me, monk chats were a crash course in the art of Burmese conversation. I saw that making friends first was key, a process that could be achieved by mimicking the same questions asked to me. This would require abandoning my ingrained idea of acceptable conversation starters in favour of those such as someone’s age and how many siblings they have. I also saw how asking a question once was usually inadequate to get an honest opinion; I found the real answers came when the same question had been posed at least three different ways.

As someone with experience in research, I was taught to draw conclusions. Yet I realized that in Burma, generalizations would be difficult if not impossible; the majority of my curiosities would have to be satisfied with, “it depends.” However, as I snuck a glimpse at the diversity of this place, I suddenly found the conclusions to be far less important.