You are here: Home/ Articles/ Beyond the Guidebook/ Indonesia's New Marine Ambassadors 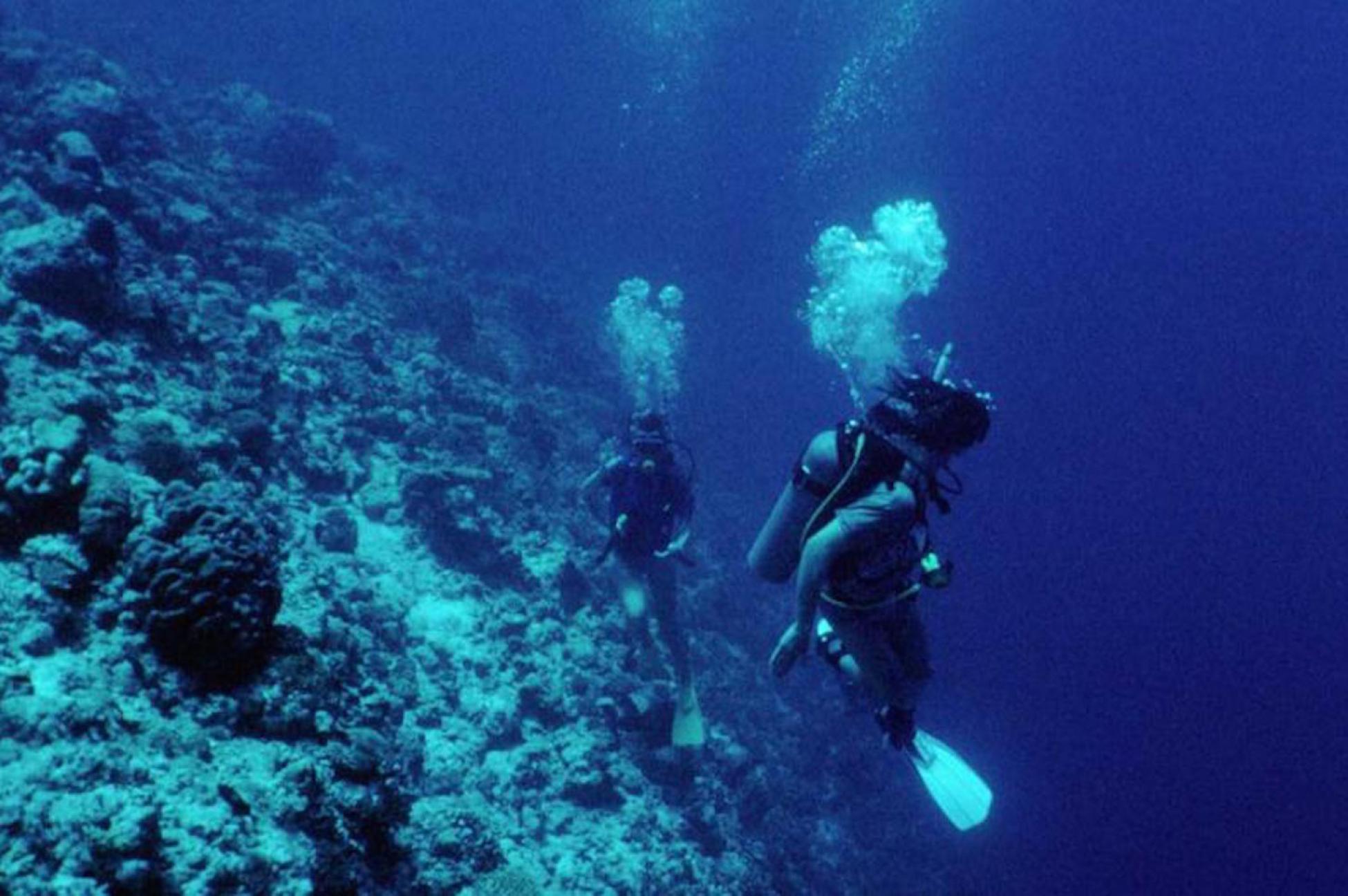 For young Indonesians, a new land of opportunity could lie beneath the sea.

The twisting, swirling mass of barracuda could only be described as a tornado. The students remained motionless, eyes glued to the spectacle before them. In my hundreds of dives, I had never seen anything like it, and I was sure the students hadn’t, either—only moments earlier, they had taken their first breaths underwater.

These five young Indonesians were on an introductory scuba dive conducted by dive-tour company, Wicked Diving, as part of a program to train local youth as dive professionals. As a dive guide and volunteer, I watched them perform a set of skills with their instructors, assessing their comfort and competency in the water. Afterward, we made our way deeper to explore the dive site, encountering the funnel-shaped school that made it difficult to want to come up.

When we did surface, the look on the students’ faces reminded me of the one I’d worn after emerging from my first dive five years earlier; like they’d just discovered a new world.

Normally, the only way these students see barracuda is on the end of a hook. Fishing is the primary source of food and income for coastal communities throughout the developing world. With little other economic opportunity, these communities often find themselves at odds with conservation efforts that look to protect marine resources.

A popular source of tourism dollars, scuba diving is often cited as a way to encourage economic growth while promoting conservation in these regions. But for residents of fishing communities, the cost of training and equipment is largely out of reach, barring them from entering and benefiting from the dive-tourism industry. Companies like Wicked Diving are determined to rewrite this narrative with programs that empower local people through dive training.

The cost of admission? Out of reach

The story of Indonesia’s Komodo National Park echoes that of many diving destinations in the developing world. Boasting staggering marine biodiversity, the number of park visitors, 80 per cent of them divers, has more than doubled since 2012 to 95,000 people.

The park is also home to over 4,000 people who depend on the ocean for survival. In 2000, a management plan was co-authored by American NGO, the Nature Conservancy, with the support of the Indonesian government. The plan restricts fishing—the primary form of employment in the area—to small zones using only “traditional” gear, such as machetes, poles and lines. While done in the name of conservation, the economic ramifications of the plan were considerable; in a 2016 study, 60 per cent of respondents from fishing villages said these efforts had reduced their income. Only 23 per cent said they had access to alternative livelihoods.

"Being underwater and seeing for yourself what's at stake has a major impact on how people feel about protecting the environment."

The management plan pointed to tourism as an alternative form of employment for locals, but according to research by conservationist Helen Klimmek, the lucrative dive industry remains largely in the hands of dive professionals and business owners from Western countries. The average small-scale fisherman in Indonesia earns between $80 and $150 per month. A dive guide can expect to earn at least 10 times that. But dive training and equipment can cost upwards of $4,000—an astronomical sum on a fisherman’s salary.

Sustainable employment is what Wicked Diving owner Paul Landgraver set out to create from the outset. Originally from the U.S., Landgraver founded his company in Koh Lak, Thailand to help economic recovery following the 2004 tsunami. Based on its success, he expanded the business to the communities of Komodo and Raja Ampat in Indonesia, offering free dive guide training to local youth.

“Employment gives a far deeper sense of pride and concern for long-term outcomes than any other method of support,” he says. After obtaining their Dive Guide certification, all graduates of Wicked Diving’s program are granted a one-year contract to work with the company.

According to Klimmek, employment as a dive guide not only offers better wages, but transferrable skills such as English and people skills that can improve future job prospects.

Local participant Ilham, 19, saw the program as an opportunity for change after imagining a bleak future for himself as a fisherman.

“Every day we would look for fish and see [their numbers] decreasing,” he says. “Since becoming a guide, I can help my family and provide for my needs as well as help others.” Ilham now envisions continuing his studies in economics and one day running his own dive business.

Sary, a young woman with a strong will and a good sense of humour, defied social norms in her village to become Komodo’s first local female dive guide. After completing the program, she earned a spot guiding at Wicked Diving's resort in Raja Ampat, one of the most coveted locations in the industry. Like Ilham, Sary hopes to continue her education and possibly become a business owner, breaking down barriers in an economy where women are twice as likely to occupy low-wage jobs as men.

Beyond providing economic opportunity, a major goal of the program is to instil a sense of stewardship over the ocean's finite resources. “Being underwater and seeing for yourself what is at stake has a major impact on how people feel about protecting the environment,” says Klimmek. “The power of these experiences shouldn’t be underestimated.”

Landgraver hopes that graduates like Ilham will become conservation advocates in their communities. “Respected voices from within a community are far more powerful than rules imposed by outsiders,” he says. “These projects are needed to create and empower those voices.”

Many other dive operators and resort owners in the region have adopted similar programs but implementing them is challenging. Training requires a significant time investment from both participants and companies, taking around 18 months to complete. While training is offered for free, participants earn only a modest stipend, supplemented with occasional paid work guiding snorkelers. Many people drop out, seeking a more immediate source of income.

For those who persevere, mastering English and effective communication can be more difficult than the diving itself. For Ilham and Sary, most days when they were not diving were spent in the classroom, learning English and practicing dive briefings.

It's a slow process and it can take years for a small company to certify a few individuals, raising the question of whether these programs are enough to help whole communities in the face of rapid development.

According to Klimmek, widespread change will require the dive industry as a whole to commit to working with local communities. In this, tourists can play a pivotal role, by choosing to support operators that invest in local people. By doing so, she says, “You not only ensure your tourist dollars are going towards helping those that need it most, but you are doing your part in preserving the very thing that brings you so much joy underwater.”

Wicked Adventures, Flores
An offshoot of Wicked Diving, the adventure company offers expeditions in diving, trekking and kayaking, utilizing the local guides they’ve trained. They offer opportunities to volunteer at their turtle conservation camp through their tours and Wicked Diving’s Divemaster course.
wickedadventures.com

Misool Eco Resort, Raja Ampat, West Papua
This resort, located in West Papua, employs local staff and has created their own marine protected area patrolled by rangers from the local community. They operate a dive guide training program and guests at the resort can volunteer with their array of community outreach and research projects.
misoolecoresort.com

Papua Diving Resorts, Raja Ampat, West Papua
One of the pioneers in the region, this operation employs local staff at resorts and as dive guides; runs the Raja Ampat Research and Conservation Center, which focuses on community engagement in conservation; and runs the Kayak4Conservation program, which trains locals as kayak guides.
papua-diving.com