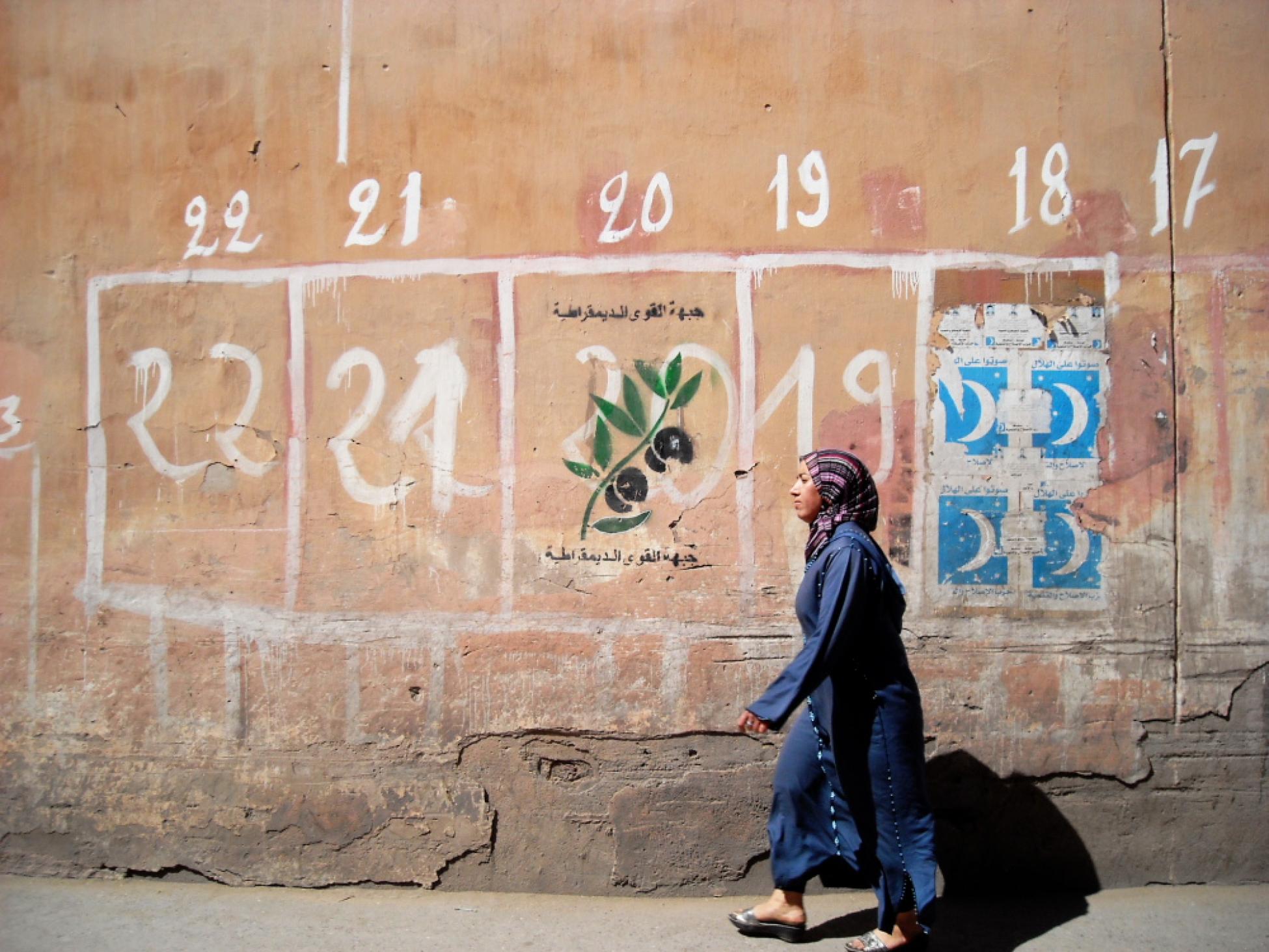 A woman walks past a sign for an election in Marrakesh, Morocco Vesna Middelkoop CC BY 2.0
By  Tom Collins

Looking beyond Western ideals of what makes a "modern" country.

If one were to drive, cycle or walk across the American-Canadian border, how much would it immediately feel like you’ve entered a new country? The answer is arguably very little—but when taking the boat from Tarifa in Southern Spain to Tangiers in Northern Morocco (across the straits of Gibraltar), this transition is enormous. Although only separated by a mere 14.3 kilometres, the short boat ride represents a move from Europe to Africa. For most, this is a big deal.

What is it that creates a gulf between Africa and Europe? The classic and frequently peddled distinctions between the two continents usually come in various forms of brute dichotomies: opposing ideas of modernity versus traditionalism, democracy versus dictatorship, and order versus chaos.

When passing on bike from Spain to Morocco there is an ostensible difference, but I wonder how many of these stark contrasts hold true?

What is leisure and what is a holiday/travel?

It might seem like a bizarre question, but it's one that reveals perhaps the answer to why it is so hard to see beyond commonplace opinions—and understanding this is key to understanding modern-day Morocco.

The idea of leisure is inextricably tied to its opposition to work, and comes from the Latin licere, meaning licence. It's licence to switch off, to do something other than our formal occupation, something that doesn't tax the brain. So if you only have two weeks of holidays a year, it's understandable that you might not want to mentally engage with whatever country is home to the beach that you're sitting on. However, it also means that very little progressive thinking is gained from travel; it’s easier to hold on to what we think we and our culture already know.

People who have economic stakes in the so-called "developing world" know this and quite cleverly use it for commercial gain. Stereotypes are always retrospective and bind a culture and its people to bygone times. This is the basis of the "authentic" experience and many countries appropriate it and sell it.

In Morocco, the main tourist haunts are Tangiers, Rabat, Essaouira, Marrakesh and numerous other coastal and mountainous towns. What they all hold in common is a bustling and crowded central marketplace, usually within a walled kasbah or medina. This is the old Morocco. It still has a place in the new, but if all we see is the classic tropes of chaotic traffic and hawkers, we go home with opinions much the same as our colonial ancestors. In reality, the tension and tandem between the traditional and the progressive is much more complex.

If all we see is the classic tropes of chaos, traffic, and hawkers, we go home with the same opinions as our colonial ancestors. In reality, the tension between the traditional and the progressive is much more complex.

The Western individual has proudly shrugged off the restrictions of religion and state and championed the free market—all of which has led him or her to view religious and traditional symbols as somewhat antiquated. It's through this lens that we see the bustling marketplace; a lady wearing an hijab, a man carrying goods on a horse and cart.

Forgetting the quagmire of issues that surround the idea of modernity, it seems at its most basic to be about heightened standard of living and quality of life. This is not such a bad aim, but it is important to accept that there are other syncretic forms of modernity.

In my opinion, Morocco has done remarkably well in combining the old and the new. If we assess why, it may reveal how modernity can be fabricated in many different ways, not just through the neo-liberal individual.

The current political system in Morocco is what is known as a "soft dictatorship" and is headed by the King Mohammed VI. After a hard day's ride, we stopped off in a tea shop and got chatting to a man named Rachide. Rachide is an avid socialist and had been exiled in Italy for the past 20 years under Mohammed VI father’s, Hassan II’s, brutal regime. This is what we think of whenever we hear of autocracy—brutality, repression and lack of rights. Indeed, in the case of Hassan II, it seemed to hold true. However, the reason why Rachide was able to return to Morocco is because compared to its democratic counterparts, a soft dictatorship can be beneficial and can actually aid in crafting modernity.

Morocco develops itself through the lens of religion and tradition via Mohammed VI and the state. With his power, Mohammed VI simultaneously makes laws that children must have Islamic names, and funds private investment schemes with an aim to raising GDP for all. Similarly, while he functions as the religious head of the country, he also personally funds a festival called Mawazine in Rabat, which is free and sees names such as Elton John and B.B King. Finally, he backs legislation that non-Muslims are not allowed in mosques (in order to prevent the voyeuristic tourist gaze, which has perhaps troubled many-a European church) and has an outward-looking foreign policy allying itself with Western countries (notably the United States).

The point is that he moulds progression and tradition together, and in a country that is fundamentally religious but also aspirational, this syncretism has benefits.

The downside of this is that in order to move forward, political rights and freedom of speech have all been suppressed. (However, if we look at the Arab spring and countries such as Libya, Tunisia and Egypt, perhaps it is not so advisable to make a move straight from effective dictatorship to the idea of Western-style democracy.)

What this illustrates is that the religious affiliations and traditional belongings that we see in the kasbah are not fundamentally anti-modern; it is merely our one-dimensional understanding of progress that paints them as such. Morocco is an example of an Arab state that surpasses our narrow understanding of what modernity is and instead boldly creates its own inclusive and creative model.

The way we choose to travel and the way we choose to see progress both leave a lot to be desired. Perhaps Spain and Morocco are no more fundamentally different than America and Canada? Instead, perhaps it's a matter of perception.