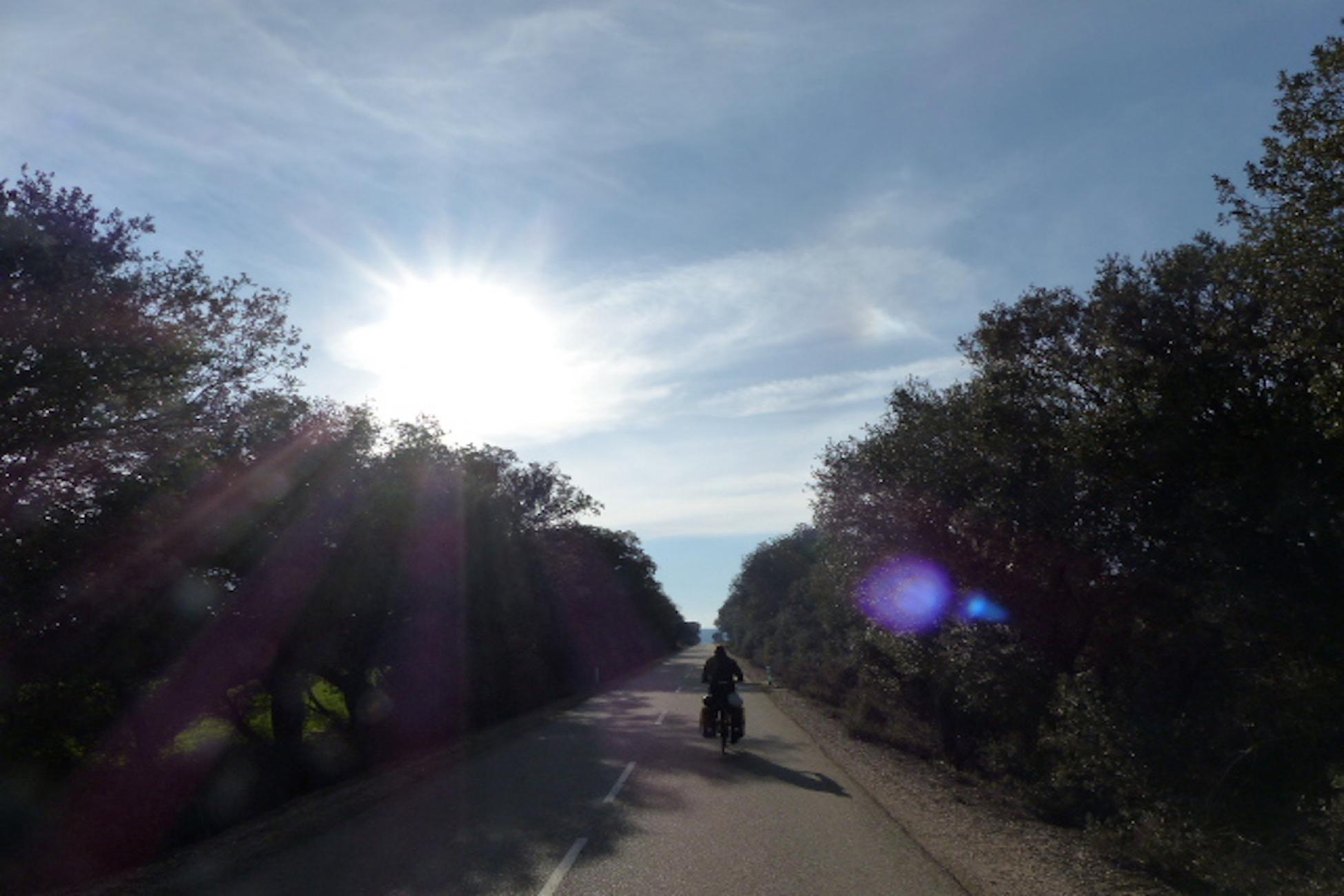 As Tom bikes closer to Africa, he's startled by his own reliance on stereotypes.

On a somewhat cold and blustery morning, we leave the boat from Portsmouth to Bilbao and enter northern Spain. After a traditional Spanish breakfast (consisting of bread and coffee), we start climbing the mountains surrounding Bilbao and are well into the first leg of our journey. But about two hours in, the temperature drops and we're hit by a snowstorm that feels like it could give Siberia a run for its money.

Immediately, all my preconceived stereotypes of Spain come crashing down around my fair-weather tires. Sol and siestas is what I imagined; sleet and sierras is what I got. As a result of allowing myself to carelessly bask in the warmth of Spanish stereotypes, I suffer. When I imagined Spain, why did I choose to wear horse blinders? And in terms of our next destination—West Africa—what lessons can I learn from such an experience?

Pre-conceived ideas of where you're going act as an anchor that gives familiarity to an unfamiliar space. The important thing to remember is that these anchors are not objective truths.

Miles Davis wrote an album called "Sketches of Spain." The Spain that I encountered in my room back in England was a constructed fiction that messily blends hyperbolic themes with elements of reality. Similarly, as Davis sounds out Andalusian-inspired melodies on the flugelhorn, he has both pigeon-holed Spain, as well as accurately represented it.

Nations and cultures can't escape being stereotyped, but we should not allow these stereotypes to idly serve as a comprehensive view of others. Having found my sunshine six days further into the ride in Salamanca, and having experienced the emptiness of a Spanish town on Sunday, Spain is both exactly like I imagined it and exactly not.

The murmurings of Africa grow ever stronger as we move south through the rural landscape of central Spain. The title track "Concierto de Aranjuez" on Davis’ album speaks through melody of a bygone era, where Spanish and North African Moorish culture were almost indistinguishable and Andalusia was known as "Al-Andalus." As the musical tones of old Spain mirror the tones of the old Mahgreb, so too can this blurring be seen in the architecture and way of life in the South. Square window frames soon take on a more crescent moon shape, symbolizing Arab and Islamic culture, and what was once a mosque is now a church.

But if my freezing hands demonstrate the dangers of underestimating Spain, and the conceptual direction of this blog is to overturn West African stereotypes, what must I be wary of when making that jump from Al-Anadalus to North Africa?

In many ways, it's necessary for everyone to have some pre-conceived notions of where they are going; they act as a sort of anchor that gives familiarity to an unfamiliar space. The important thing to remember is that these anchors are not objective truths and are very much one side of the story.

Worse—and this is the point of the blog—is that some stereotypes are fundamentally damaging. The worst that could happen if I consent to what the world would have me think of Spain is that I get cold hands and feet. Spain has an overall positive global image. What could happen—and keeps happening—to Africa if you buy into global media stereotypes is grossly more damaging. Africa is presented as barbaric, dangerous and backward, and because of this many would not go there. Unlike Spain, I have thought a lot about Africa and I hope this gives me some kind of light to break away from the normal view of Africa in order to experience and retell a different side of Africa.

In terms of what to expect apart from keeping an open outlook, a small anecdote from the journey so far comes to mind: On arriving in a northern town called Burgos, me and my fellow cycler stumbled across a talk by none other than Heinz Stucke, a man who has been cycling around the world since 1962. This was right up our street and the sheer coincidence almost felt like a nod of approval from above.

After listening to the talk and watching the documentary presented by a Spanish filmmaker, I decided to ask a question (after all, Heinz himself had toured round West Africa). With my rudimentary Spanish, I started with "hablas Ingles" and then asked what advice he had for biking in West Africa. Adhering to a Spanish audience Heinz answered in Spanish and so, unfortunately, any valuable advice that could have been relayed was lost in translation.

My first reaction was to be slightly miffed—a good opportunity had been missed—but then I smiled as it dawned on me that the less I heard about West Africa, perhaps the less my opinion would fall foul to stereotypes and the more I could travel through Africa without taking on someone else’s agenda.