You are here: Home/ Articles/ Beyond the Guidebook/ Mumbai's School on Wheels 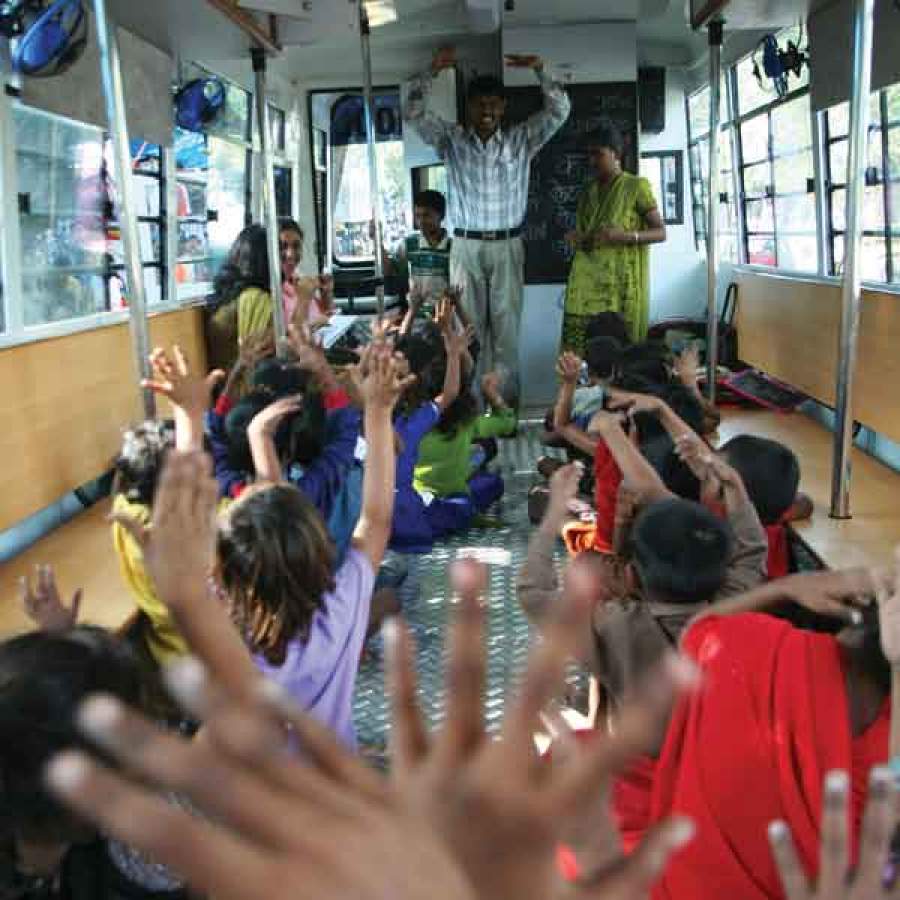 In a city where street kids don't often make it to school, a bus brings learning to their doorsteps.

It’s 7 a.m. in Mumbai.  Eleven-year-old Rangita awakes to a cacophony of morning traffic just metres from where she lies, separated by a mere plastic tarp.  Unlike most Indian street children her age, Rangita wakes not to work the streets or beg, but to don a school uniform and work toward her goal of one day becoming a medical doctor.  She is one of the fortunate few to have attended the School on Wheels programme and to have graduated to the regular school system.

On postcards, Mumbai, formerly know as Bombay, gives the appearance of a thriving cosmopolitan centre laced with architectural reminders of its colonial past.  India’s largest city has a booming economy—and some of the highest rent prices in the world.  Mumbai is filled with unbelievable contrasts that make it a unique and eye-opening experience for visitors—and among these is Asia’s largest slum.  It is estimated that half of the city’s residents call one of its many shantytowns home.  The majority of those residing in Mumbai’s slums work hard, pay rent and hold respectable jobs.  But those who are unable to earn enough to live in the squalor of the slums are forced to live on sidewalks, in parks and in railway stations; just about anywhere they can eke out space in one of the world’s most densely populated cities.

Struggling to survive, the children of Mumbai’s streets often end up forfeiting an education in favour of work.  Parents often do not send their children to school because they contribute desperately needed rupees to their family income.  Although child labour was officially banned in 1986, many shop owners ignore the law partly to exploit the labour market and partly to provide an opportunity.

Bina Lashkari, a social worker based in Mumbai, has long believed that education is the only way to give the children of Mumbai's slums hope for a better future.  Rather than trying to convince families to send their children to school, Lashkari came up with the idea of bringing the school to them—a “school on wheels”.  Converting a school bus into a classroom, equipped with educational materials and instructors, she created a stable and consistent classroom environment that could be taken right to the “doorsteps” of the working children of Mumbai.  The idea took nearly eight years to come to fruition.

Lashkari explains this to me while driving me toward the School on Wheels for my first time.  Fast talking, passionate and gesticulating wildly, Lashkari explains, “People thought I was crazy.  ‘Why do you want to waste money on a bus?’ they asked.  Finally, in 1998, the Japanese consulate donated the funds for a bus and we haven’t looked back since.”

School on Wheels was then incorporated into an existing non-governmental organization (NGO) called Doorstep School;  it has now been educating street kids in Mumbai and Pune for eight years.  A typical day in Mumbai sees the School on Wheels making four stops in areas where the concentration of street kids is high: Crawford Market, Cross Maiden, Fashion Street and Churchgate Station.  Each class includes between 20 and 25 students and lasts two hours.  The bus parks, some kids come to meet the bus, and the teacher collects the others from their homes—usually nothing more than tents pitched on the sidewalk.  Children are taught from a curriculum of Hindi, math, science, music and art.

The goal is to get the children up to a level where they can be mainstreamed into government schools.  Lashkari explains that this is no small task, “We need to start from scratch.  These kids have short attention spans because they’ve never been to school.  Each group of students initially learns discipline, health issues and cleanliness.  We teach them not to beg, steal or cheat.  We teach them not to swear, not to hit one another and how to sit in one place for a period of time.” The model seems to be working relatively well for Doorstep School.  In the past seven years, 160 out of 400 kids have entered mainstream schools through the School on Wheels program.

Lashkari tells me we are getting closer to the bus.  We make a sharp turn down a street narrowly missing pedestrians, other vehicles and the odd cow.  Just as I realize we have been driving into oncoming traffic, we veer to the side of the road.  Parked in front of an endless line of improvised clothing shops is the School on Wheels.  Lashkari nods toward the bus: “Let’s go inside, what you will see inside will change you forever.”