You are here: Home/ Articles/ Beyond the Guidebook/ Be-witched in Ghana 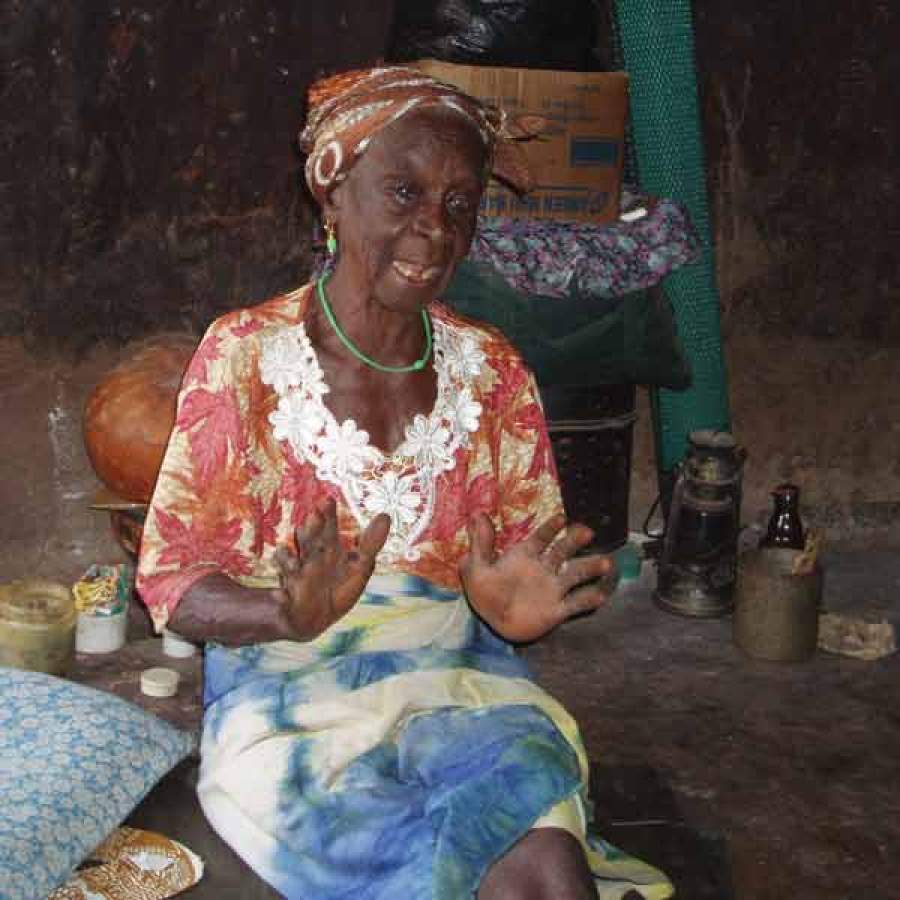 For North Americans, witchcraft is the stuff of books and movies. But in Ghana, its existence is undisputed. The question is what to do about it.

Eight years ago Mama Ayi was given an ultimatum. Run or we'll kill you.

"I'll never forget that day." Curled on the concrete floor of her small hut that acts as both her bedroom and kitchen, Mama Ayi's blue eyes search the past for the day she lost everything.

"I was sitting happily one afternoon doing my housework and this man came to tell me there's a sick man in the village and I'm the cause of his illness. If I don't leave in five minutes I'll be killed.

Mama Ayi had been branded a witch and in an instant her life was stripped from her. As she fled the community, she watched the ashes of her house blaze in the distance. Mama Ayi ran to Kuku, a witch camp in northern Ghana—a safe haven for those who are outcast.

"They [the community] were jealous of me," explains the 60-year-old widow and mother of three. "They realized I had a thriving business and they cursed me. It's a hatred that put these allegations on me. Even God knows I'm not a witch." Yet in her small community of Wolensy it wasn't God's decision but rather that of one man and those who supported his accusations.

Accusations like this are not that uncommon to people in Ghana, especially to those living in the northern region where some witch camps have existed for more than 80 years. In the past, if you were accused of witchcraft you were sent to the outskirts of town to have your throat slit or to be burnt with a hot iron. Today you are simply banished to one of seven camps in northern Ghana. The camps were established by traditional rulers and fetish priests, to keep women who were accused of witchcraft safe from those who wanted to kill them. Today, there are over 1000 alleged witches living in these camps.

Patrick Zakari-Saaips, regional director of the department of women in the city of Tamale, northern Ghana, has been working with witch camps in the northern region for the past six years. He's been helping to empower the women through micro credit and other income generating projects, trying to reinstate a sense of independence. Although there is currently no law in Ghana against the existence of the camps, harsher penalties are now in place for those who commit violent and abusive acts against women believed to be witches, and the department of women is trying to improve their quality of life while they're there. Yet despite his work, Saaips still believes in witchcraft and says the camps will always be there.

"I believe in it [witchcraft] because I'm a Christian and it's mentioned in the bible. We shouldn't wish it away. Witches exist!" Saaips only wishes there was a better way to identify and accurately diagnose these women because there are many people in the camps who are not witches.

"There are many women who are in the camps because their communities have made up their minds and identified them as witches, but they aren't. If they can rightly diagnose that a woman's a witch, take away her powers and reintegrate her back into the community afterwards, that would be the best solution. But I don't know how we can rightly diagnose them."

The debate within the country, and particularly in the north, seems to focus on correctly diagnosing the women, rather than putting a stop to the accusations and to the existence of the camps. The issue of witchcraft is, for the most part, uncontested and undisputed throughout the country and even across most of West Africa. Neighbouring countries such as Benin, Togo and Cote d'Ivoire hold the same belief that Ghanaians do: there's no denying witchcraft does exist and even though these countries might not have organized 'camps' in place, the same mentality pervades most of the region. It's a mentality that is rarely challenged, and one that dictates a way of life for many African countries, not only Ghana.

It is this same belief that has people like Saaips, greatly conflicted; on the one hand believing in the rights of these women to continue living their lives free from interference and hardship, but at the same time believing that such women must be controlled, and stripped of their powers to ensure they are no longer threats to themselves and their communities. This attitude, shared by so many Ghanaians, poses a great challenge for human rights groups working to combat the issue. Many people want to abandon the practices associated with the camps, yet at the same time they believe adamantly that those with powers must be 'dealt with'. How the women are 'dealt with' differs depending on the region. In southern Ghana, accused women may be banished or killed; in some areas they are tolerated.

However in northern Ghana women are 'camped'—the only place in the country where organized witch camps exist. When a woman is accused of being a witch she is sent to the village chief to rid her of her powers and to take a test: a test that will either confirm or deny the allegations. Currently this diagnosis is based on slaughtering a chicken. The suspected witch must send a chicken to the fetish priest (servant of the gods) to be killed. If she is innocent, then when the chicken dies it will fall face up signifying she has nothing to hide; however, if the woman is a witch the chicken will lie face down, concealing the truth.

Eight years ago Mama Ayi's chicken fell face up. She had nothing to hide, she was not a witch. Ultimately it didn't matter.

"When the incident occurred my house was burnt, they chased me away from my community. I couldn't carry even a needle or spoon from the house. I can't go back, it doesn't matter what the verdict is."

Eight years later Mama Ayi sits on the damp, cold floor of her house, now too old and weak to fetch water and food. She relies on the other women in the camp to help her survive and waits for the occasional visit from her children, and perhaps the day they will come to take her home.

"It is up to the families of the women to take them back, yet for the most part this doesn't happen." Saaips says. Some projects such as the Go Home project, started by the Presbyterian Church, and similar projects spearheaded by national human rights groups, have been trying to reintegrate the women back with their families

"They've been successful on some levels," Saaips says, "but in some cases the women go back home and are hurt emotionally or physically so they just end up returning to the camps. Ideally I agree they should be reunited with their communities, but there is a stigma there. It will never happen that people don't believe in witchcraft."

It is a stigma that human rights journalist and Ghana's northern BBC correspondent, Mahama Shaibu, confronted 18 years ago when he accused his neighbour of haunting his dreams in his small northern town of Bimbinla.

"I confronted her because I didn't understand why she was coming to me," Shaibu recounts, saying that the next day the woman fled the village and he never saw her again. Had it happened today, Shaibu says he probably would have dealt with it differently, but that doesn't change the reality.

"They say witchcraft is there and I believe it. I might have been wrong years ago with that woman, but looking at how often women confess it's difficult to establish whether or not they're actually witches. What happens if you allow a person to stay in the community and she's a witch?"

It is a question that is currently being put to the test for Ghanaians across the country, as both government and the police are cracking down on those who abuse and kill women believed to be witches.

"People are trying to be more tolerant now because there's more fear that they'll be in trouble if they kill or abuse a woman. With less freedom comes more tolerance. People now know they'll be arrested," explains Saaips, adding that since the late 1980s there has been a 70% reduction in the number of people coming to live in the camps. It's a drastic decline that Saaips attributes to both the harsher penalties and the workshops being conducted by the department for women, in order to raise awareness surrounding the issue.

"Hopefully one day there will be no need for the camps. But I think that will take a very long time as people will always believe in witchcraft. They just have to become more tolerant, but that won't happen overnight."

"It's very difficult for a foreigner to understand," Shaibu adds. "There's no scientific proof that there are witches but even in the western world they are there. They just use their powers to perform magic, and not end the lives of others."

And even though progress is being made and people are becoming more tolerant, this is still a controversy that for now has no foreseeable solution. As long as Ghanaians continue to believe in witchcraft, women like Mama Ayi will continue to find themselves forced to accept a life they don't believe they deserve.

"Even when I die I will never forget what happened to me that day. The man who was sick died anyway, even after I ran away. So was it really my fault?"

A question that, for the moment, has no answer.


Sam Mednick worked as a journalist in Ghana with Journalists for Human Rights.