You are here: Home/ Articles/ Volunteer Abroad/ Articles/ A Duty to Care: The ad-hoc humanitarian response in Lesvos, Greece

A Duty to Care: The ad-hoc humanitarian response in Lesvos, Greece 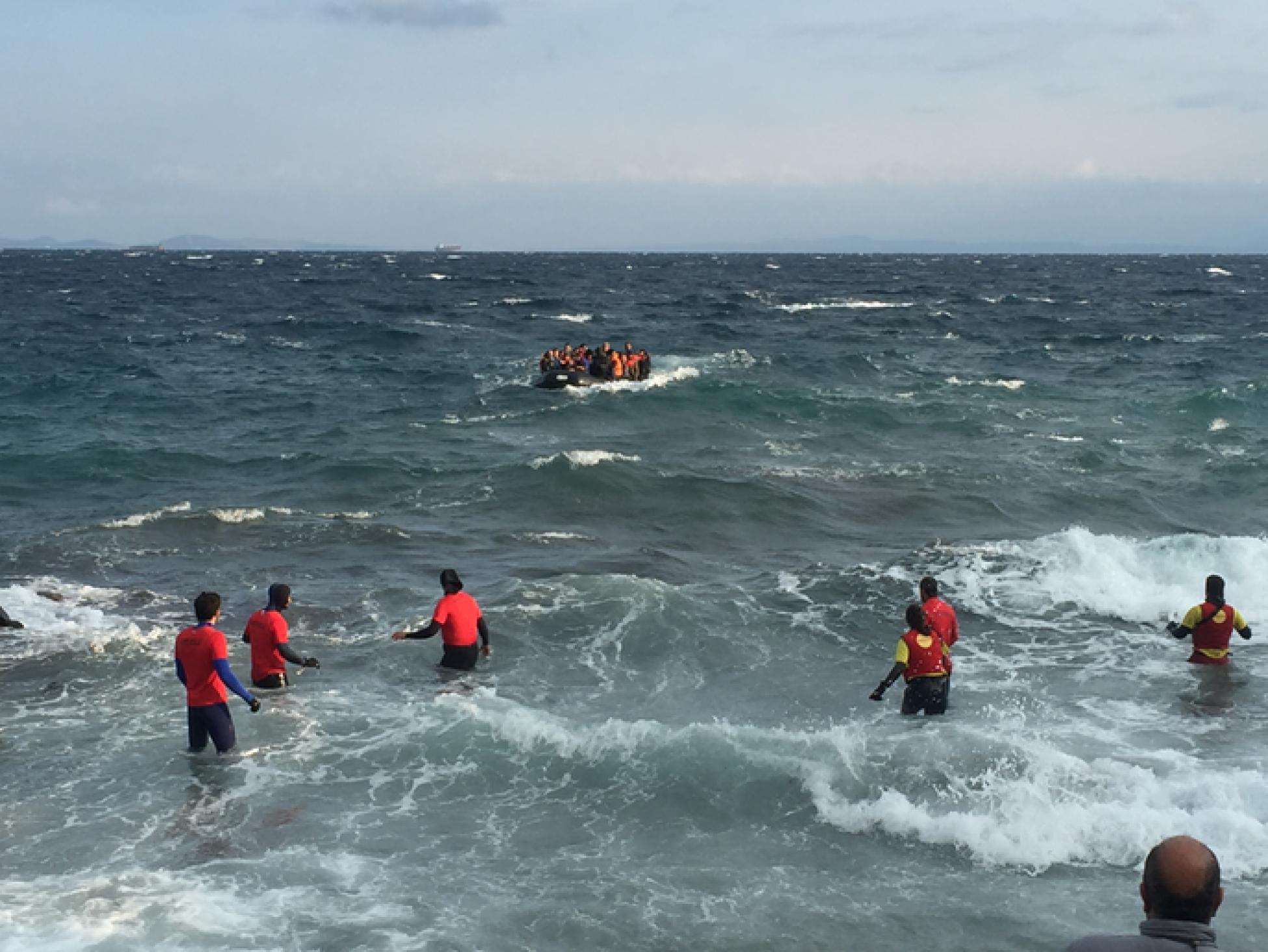 “They came to us late at night, wet and shivering,” says Corey Anhorn, recounting the night he’ll never forget.

Anhorn was volunteering at Moria Camp on Greece’s Lesvos Island, when two young boys from Afghanistan approached, asking if he could spare some gloves. Small and frozen, the younger one just wanted something to keep his hands warm. Anhorn took the boys inside and made sure they had pants, underwear, coats, socks and new shoes.

“I've seen many things in my life,” he recalls, “but the younger boy’s reaction when we managed to dig up a brand new red sweater will always stay with me.” The Montréaler had never before seen someone so thankful for something so basic—a little piece of red cloth that most people wouldn't have glanced twice at.

“When they left, I went to the back of the storehouse by myself, in the dark, and cried,” says Anhorn. “No 14-year-old kid deserves to be alone in a refugee camp.”

As the Syrian war rages on, millions of people—mostly Syrians, Iraqis and Afghanis—have flocked to Europe in desperation. Lesvos is the first stop for nearly half of them. At interim camps, such as Moria, new arrivals change into dry clothes, enjoy a few hot meals and register before continuing on to Athens and up through Europe.

No stranger to humanitarian aid, Anhorn, said he came to Lesvos out of “a moral obligation.” The full-time Canadian Armed Forces reservist used his three-week leave to volunteer on the island. He’s just one of the thousands of solo volunteers who are using their own time and money to help the seemingly endless flow of people arriving in Greece.

In the worst refugee crisis since WWII—over 100,000 people arrived by sea in the first two months of 2016 alone—what’s taking shape on Lesvos may be one of the most ad-hoc humanitarian responses in modern history. It's estimated that since 2015, around 50,000 volunteers have already passed through the island. It’s not unusual to see UN organizations working beside pop-up soup kitchens, people distributing clothing out of the backs of their cars, and NGO tents lining the shore waiting for boats to arrive. As the world awakens to the reality of the crisis, people are not only asking what they can do—they’re taking matters into their own hands.

What’s taking shape on Lesvos may be one of the most ad-hoc humanitarian responses in modern history.

Dutch native, Sgenet Haens, and her partner, Ali Benes, emerged from retirement to work around the clock distributing food, clothes and medical supplies. The couple usually spends six months a year on the island; but once refugees started pouring in they decided to stay year-round. Refusing to accept a penny for their work, the duo spends 3,000 euros a week, all of which has been funded by donations and supported by word-of-mouth.

“We like to do things,” says Haens, explaining that they didn’t want to become an official NGO because they felt they could get more done on their own. The pair and their three partners now have enough resources to last into 2016, with money continuously rolling in.

Without having to go through bureaucratic red tape—they don’t have to answer to donors or fill out paperwork—these unofficial groups can remain agile and respond quickly to the needs of refugees. That’s particularly advantageous on Lesvos, where the need for help far exceeds the capacity of organizations on the ground.

“Without the help provided by volunteers in these camps, refugees would be without a place to sleep, without food to eat and without the information so critical to them to make it safely to Europe,” says Anhorn.

However, this system of uncoordinated volunteer efforts isn’t seamless. Haens admits that recently, the island is slightly overrun with people who have nothing to do and are trying to make themselves needed where they’re not. As the number of refugees has dropped (around 1,500 arrive per day in the winter, compared with up to 7,000 in summer) she says there are people who don’t know where to focus their time and are wandering aimlessly.

Currently, efforts are underway to better organize people. As of early 2016, all arriving volunteers and NGOs must now register with the city council. The hope is to create a more cohesive response and focus people’s energies and skills where relief is needed most. Camps such as Moria are always in need of volunteers to hand out supplies and to help direct people. However, there are also plenty of warehouses on Lesvos in need of sorting the overwhelming number of donations that keep pouring in, as well as triage assistance when the boats arrive from Turkey. The idea is to clearly identify where the needs are and send volunteers as necessary.

“In an ideal world there wouldn’t be a need for impromptu volunteer support at this scale,” says Anhorn. Until that time comes, however, his message to people who are on the fence about coming to Lesvos is clear.

“No matter what your politics or opinion on the response to the refugee crisis, I think we can all agree that no one should be left to drown on a trip from Turkey to Greece in a rubber boat, nor should they be allowed to freeze to death in a refugee camp,” he says.

Now back home, Anhorn says he still thinks about those two boys every day. He hopes they made it somewhere safe and that they now have more than just a little red sweater to find happiness in.

Volunteering on Lesvos isn’t an easy task. With long days and extreme weather, volunteering is both mentally and physically demanding. If you’re up to the challenge, here’s how to find out where your help is needed most.

Connect with Other Volunteers

Lesvos Slack group: Download Slack (a messaging app) and contact This email address is being protected from spambots. You need JavaScript enabled to view it. to be added to the Lesvos volunteer group. Here, you’ll find information about how to connect with volunteers, as well as media updates.

Lesvos Volunteer Info: Updated regularly, this site contains current information about ongoing and urgent needs on the island. First though, read the "Volunteer Starter Kit." This ultimate how-to document has been compiled by long-term volunteers on the ground, and contains everything you need to know about volunteering, including registration, lodging, clothes, car rentals and more. lesvol.info

Lesvos Volunteer Facebook Group: Members can connect with other volunteers and NGOs in need on this public Facebook group. facebook.com/groups/informationpointforlesvosvolunteers

Pikpa Camp: A self-run refugee camp with a focus on sustainability, Pikpa is for the island’s most vulnerable people, including women and children, and injured individuals. Show up to the daily morning meeting for updates and to learn how you can get involved. lesvossolidarity.org

Lighthouse Relief: A Swedish organization, Lighthouse provides 24-7 emergency relief at their camp and clinic. To volunteer, you will need to be 21 years of age and able to stay for a minimum of four weeks. However, they also accept short-term volunteers for their beach clean-up program to remove discarded dinghies and life jackets. lighthouserelief.org

Octopus Volunteer Team: Located on the north side of Lesvos, this group is in need of volunteers to sort clothes, prepare food for refugees, patrol the coast for arrivals, and to translate. Contact them via their Facebook page: facebook.com/Octopus-Volunteer-Team-Lesvos-593864180791265

This information is current as of June 2016; please contact each organization directly for up-to-date information.