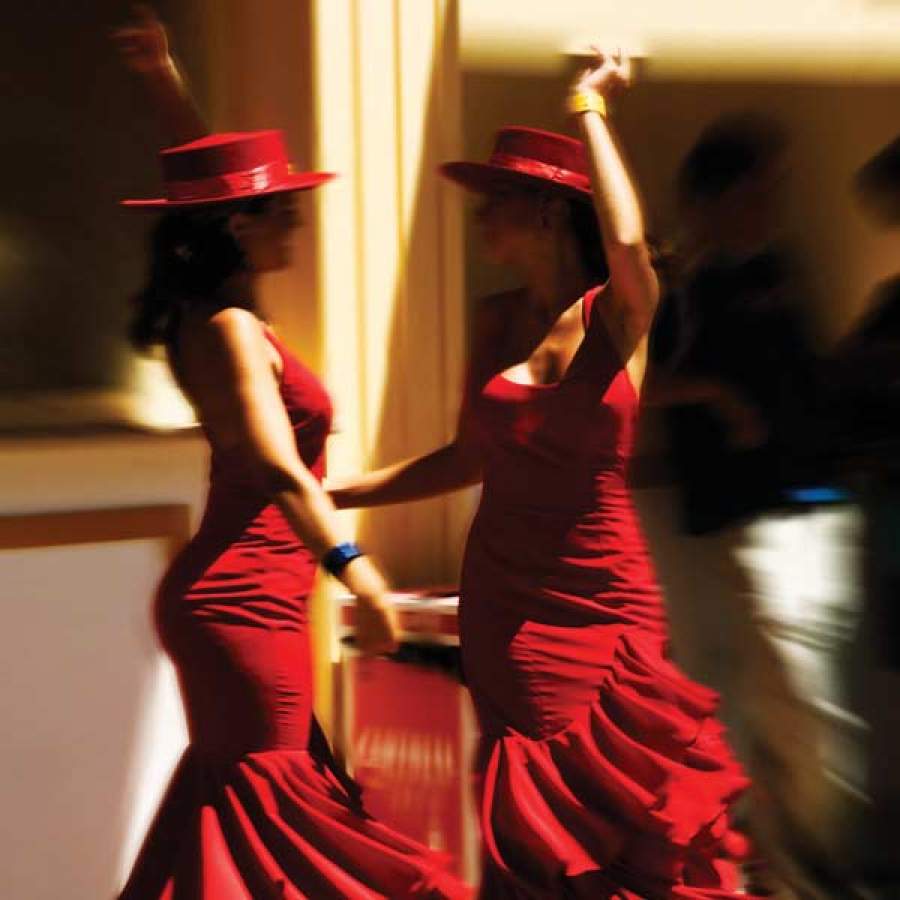 Anyone can learn to dance flamenco. It just depends on how easily you can put aside your pride.

And how badly you want it.

“Bailar con el coño,” laughs 33-year-old flamenco veteran, Marta Allue.  “That’s the trick to dancing.”  Translated directly, the expression is crude—the gist being to dance with what’s between your legs—something Allue says she learned years ago from her teachers.

“To dance well you have to trust yourself and enjoy your force.  Don’t be afraid to use the entire body.”  And that is exactly how Allue’s been dancing for the past ten years.  A Barcelona native, Allue turned to flamenco because she loved the combination of dancing with both physical discipline and with the theatrical expression that flamenco offers.  She says the energy found in flamenco dancing is unparalleled and is something she tries to impart to all her students.

When people say Barcelona, many foreigners think of flamenco.  Thousands of tourists arrive daily at Barcelona’s airport looking for the typical Spanish experience.  With Spain’s ubiquitous Mexican straw hats—which, ironically, are not Spanish at all—two-Euro bottles of wine, tapas restaurants and overflowing sangria, many visitors feel the experience is not complete without learning, or at least attempting, a little flamenco.

Especially prominent in Andalusia in the south of Spain, flamenco dancing has characterized Spanish culture for centuries.  Combining acoustic guitar with singing, chanting, dancing and staccato clapping, flamenco dancers perform with passion, energy and sometimes even tortured expressions on their faces—the whole time trying to maintain their grace and dignity.

Perhaps the tortured expressions on dancers’ faces have something to do with the history of flamenco itself, which is thought to have been born out of the persecution of the Spanish Inquisition.  When the monarchy declared in 1492 that all non-Catholics must convert under threat of punishment, it is said that Muslims, Jews and Gypsies came together to support one another.  And while some of the details may have been lost, it is during this period of danger and persecution that flamenco is said to have developed— not surprisingly, with influences of Gypsies, Jews, Moors (Arabs) and native Andalusians.

The only sure thing about flamenco is that regardless of age, nationality, body size or bone structure, anyone can apparently learn how to do it.  It just depends on how easily you can put aside your pride and on how badly you want it.

Running a private business in Barcelona’s trendy Gracia district for over five years, Allue offers both private and group classes to people who really want it—or at least they do when they first sign up.  Teaching students from Japan, France, Turkey, Brazil, Chile, Finland, Israel and Spain, Allue says it’s the foreigners she loves teaching the most.

“Foreigners have a special energy.  They laugh a lot, their time isn’t as limited as the Spanish people and they usually want an intense experience.”  An experience, which 39-year-old Australian, Rachel Taylor, has been feeling for the past two months.

On exchange at the University of Barcelona, Taylor, a blues guitar singer and songwriter in Australia, had never taken a dance class in her life.  Yet she says it has always been her fantasy.  “You come to Spain and you want to dance flamenco.  With the fancy costumes, the roses in your hair and the passionate image it has, I just had to try it.

“The first class was a shocker.  She makes you dance in front of a mirror and I wasn’t used to looking at myself.  There’s a lot of clapping and rhythm to keep everyone in time, I was all over the place.”  Two months later Taylor says she’s finally feeling a little more comfortable and a lot less awkward. Something Allue says is not uncommon for flamenco beginners.

No matter where you’re from, she says the best flamenco dancers are the ones who know their bodies and aren’t afraid to take a chance.  It’s also easier for those who have seen flamenco before because they’re able to interpret it.

When she has students who have never seen flamenco and are having a little trouble getting it together, Allue takes them to a show to see how it’s really done.  However, her other, preferred tactic to help students feel the essence of flamenco is to have them close their eyes and imagine they are playing a part.

“When I dance, I imagine I’m a character and I internalize it.  I need to feel it.”  A feeling, Taylor pipes in, which is something of a more acquired emotion.

“We all have to get in this circle and clap and yell out things like, ‘lalalalala, woooooo, vamos guapa (let’s go pretty)’ and then one by one we get in and dance.  It’s hard to do it without feeling like an idiot and then on top of it there’s the dance sequence, which is really easy to forget.  Then comes the embarrassment,” Taylor smiles but confesses that it’s really nice to have everyone standing around making fools of themselves clapping together in a circle.

And Allue admits she doesn’t go easy on her pupils.

“My motto is rapido y divertido.  (fast and fun).  It’s the only way for people to completely throw themselves into the experience, even if they don’t understand everything and aren’t able to internalize it at the beginning.  After some time they get the hang of it,” pausing briefly she raises an eyebrow and looks at Taylor, “well most of the time they catch on.”  The two dancers banter about Taylor’s progress over the past two months, both admitting that she’s come an incredibly long way.

“It’s a very full-on oral and physical experience,” Taylor explains.  “It’s so different from anything I’d ever done and sometimes I really love it.”  Taylor says the real challenge for her is to cut off her logical mind when she’s dancing and stop feeling so English.  “I need to just feel the music because my mind wants something normal, like 1,2,3,4 but you can’t do that with flamenco.”

Allue agrees, as there’s no logic and no set method to flamenco dancing.  It is one of the most expressive, non-methodical, most liberating art forms, one that can’t be summed up in a dance sequence that makes any sense.

“You really have to dance with your coño.” Allue smiles.  “Those that dance with their gut, make the best flamenco dancers.”

For more tips on flamenco dancing, plus links to schools in Barcelona, please click here.