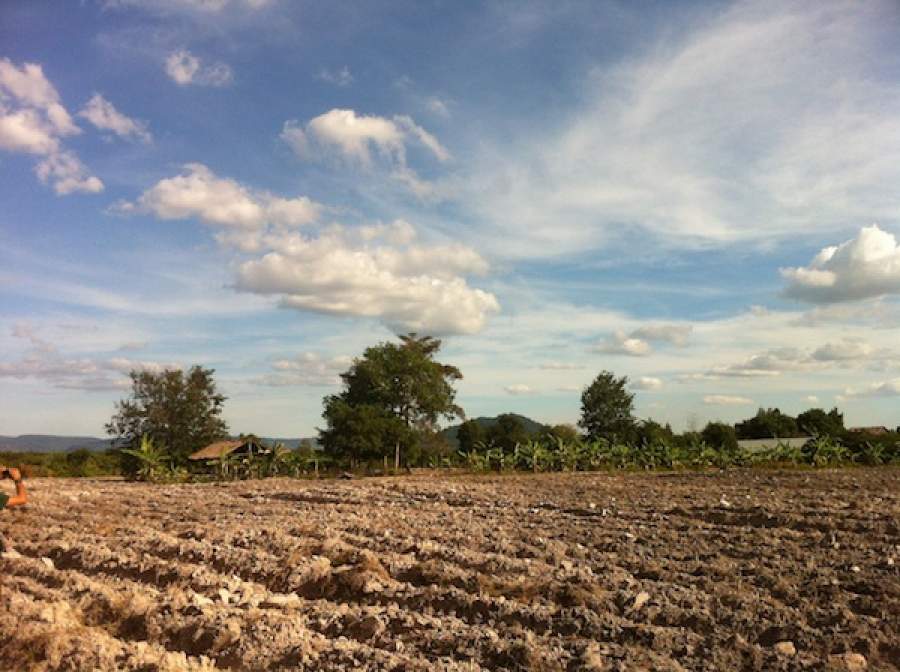 Raine makes an amazing discovery in a sweet potato farm over 25 kilometres from Siem Reap.

A couple of days ago, my dad went out to the completely undeveloped property he owns to document how much it had grown and changed over the past year. When he arrived, he discovered that five hectares (12 acres) of the unfenced property had been turned into freshly planted sweet potato fields.

My father and I made the trip to look at the once-overgrown land being harvested by a farmer who lives across the small dirt road. After we turned off the highway, we started driving through fields of something that looked like monstrous weed plants (which turned out it was some sort of vegetable). Several turns into deeper brush on a white sand road (which seemed strange considering the norm is red dirt) later, we came to a bend and the overgrown road cleared completely, revealing the ash-grey soil. In rows and rows of built-up soil were little sticks that resembled rod-straight pieces of ginger. They had just been stuck in these little mounds, hoping to take root in the dry rocky soil.

As we got closer to the edges of the tilled land, I found a gathering of tiny ferns growing out of some dry scrub. I bent down to get a better look and accidentally touched a bundle of the plant with my foot—and suddenly, it moved in reaction to my touch. Of course, I had to test this out again and again. And when I got home, I couldn’t help but want to know more about such a tiny but interesting part of the ecosystem in this potato field.

Mimosa Pudica originated in South America but is now found across the tropics. The plant was first given a proper analysis in 1753. Its name stems from the Latin for “shy or bashful” and the plant also has some funny nicknames such as “humble plant,” “shy plant,” or “touch-me-not.” They react to light, so one could say they “go to sleep” at night.

Although the plant’s shyness is incredibly adorable, their effect on the sweet potato farm could be dastardly, especially because this surprise sweet potato farm is hand tilled. They are considered an invasive species in Southeast Asia, South Asia, and parts of Australia and Tanzania. Although I’m from the US and it grows in several states (including Texas, which is very close to where I’m from) I’d never seen it before the sweet potato farm.

It’s funny how being out there in the middle of nowhere really gets your brain thinking about the little connections in nature that make things run. Especially here in Cambodia it is interesting how this outside influence—in the form of a tiny little fern—could affect a very important part of a farmer’s life. Even on five hectares, the farmer might only make a couple hundred dollars to last him all year. Hopefully Mimosa Pudica doesn’t get in the way.

Raine Blunk is a 20-year-old writing student from Little Rock, Arkansas who lives in Savannah, Georgia. She works for the Savannah College of Art and Design and has spent time living in Los Angeles, Brooklyn, Montreal and Louisiana. She is currently working in Siem Reap, Cambodia, where she helps to train Khmer students to work in the hospitality industry.