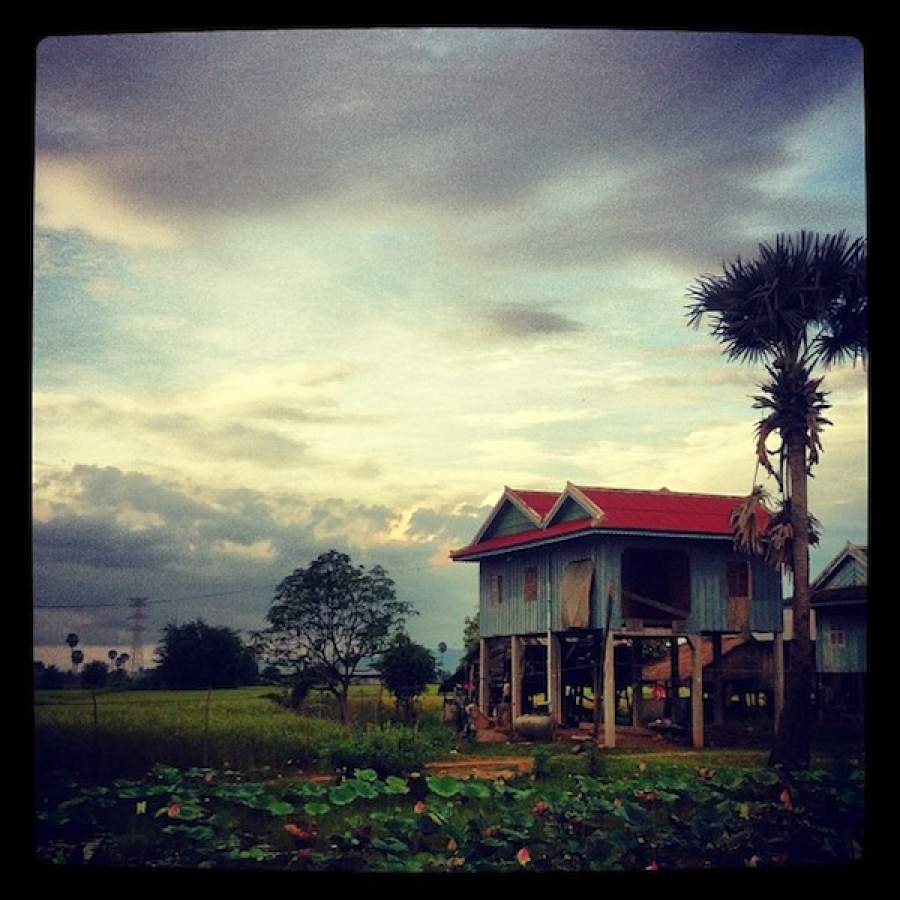 I’ve discovered one of the toughest places to type has got to be from the backseat of a taxi shooting 60 miles down a road that cuts through the beautiful and treacherous countryside of Cambodia. Palm trees across cow paddies are set in the background of wooden homes on stilts. Children run across the street between cars, busses, bikes, motorcycles, and occasional dog or cow that travel on this road between Kampot and Phnom Penh.

I have just begun a 55-day trip—my first time here since I was 16. My father lives in the countryside of Siem Reap as a freelance videographer and photographer for non-profits, local businesses and agencies across the country and throughout Southeast Asia. Although this is my third time here, it is my first time here as a writer. I am here to record and learn about some of the people and organizations that are helping to put Cambodia back together.

The country is home to so many bright faces that live in the shadow of the Khmer Rouge. Between 1975 and 1979, the country’s dictator, Pol Pot, sent millions of Khmer families out of their homes and into concentration camps. Terrified of being overpowered, Pol Pot immediately executed doctors, lawyers, nurses, artists, writers, and teachers—anyone with a higher education. Over two million people were killed. During this time, the United States secretly dropped between an estimated four and six million land mines on the country. Thousands of land mines are still being found today.

Today, many Cambodians live in poverty in close proximity to tourists from all over the world. Since the fall of the Khmer Rouge in 1978, expansion has grown exponentially across the country. But despite that growth, the country has failed to improve human rights laws for the Khmer people. Cambodia’s new Prime Minister, Hun Sen, met with Obama to discuss privately the atrocities against Cambodians after the US-Asia Summit, which was held on the day of my arrival in Phnom Penh.

The Phnom Penh Post ran a story from the perspective of both a human rights activist and a Khmer woman—the author lamented the fact that Obama had no time to speak directly to the Cambodian people, making his groundbreaking visit to the country somewhat of a flop. She hoped that over time, the President might help Hun Sen understand the importance of Khmer laws to protect the people’s jobs, assets, and overall quality of life.

My arrival in Cambodia comes at a strange time for the country as people across the nation are beginning to speak up about their struggles living here. Political unrest is on the horizon and there are many stories here that need to be told. But there is hope here, and it comes in many different forms--artists and aid workers, volunteers, journalists, and musicians (both Khmer and otherwise) are all helping Cambodia move past its tragic history. I hope that throughout my time here, I can help.

Raine Blunk is a 20-year-old writing student from Little Rock, Arkansas who lives in Savannah, Georgia. She works for the Savannah College of Art and Design and has spent time living in Los Angeles, Brooklyn, Montreal and Louisiana. She is currently working in Siem Reap, Cambodia, where she helps to train Khmer students to work in the hospitality industry.