You are here: Home/ Articles/ Work Abroad/ Blogs/ Painting the Future in a Syrian Refugee Camp

Painting the Future in a Syrian Refugee Camp 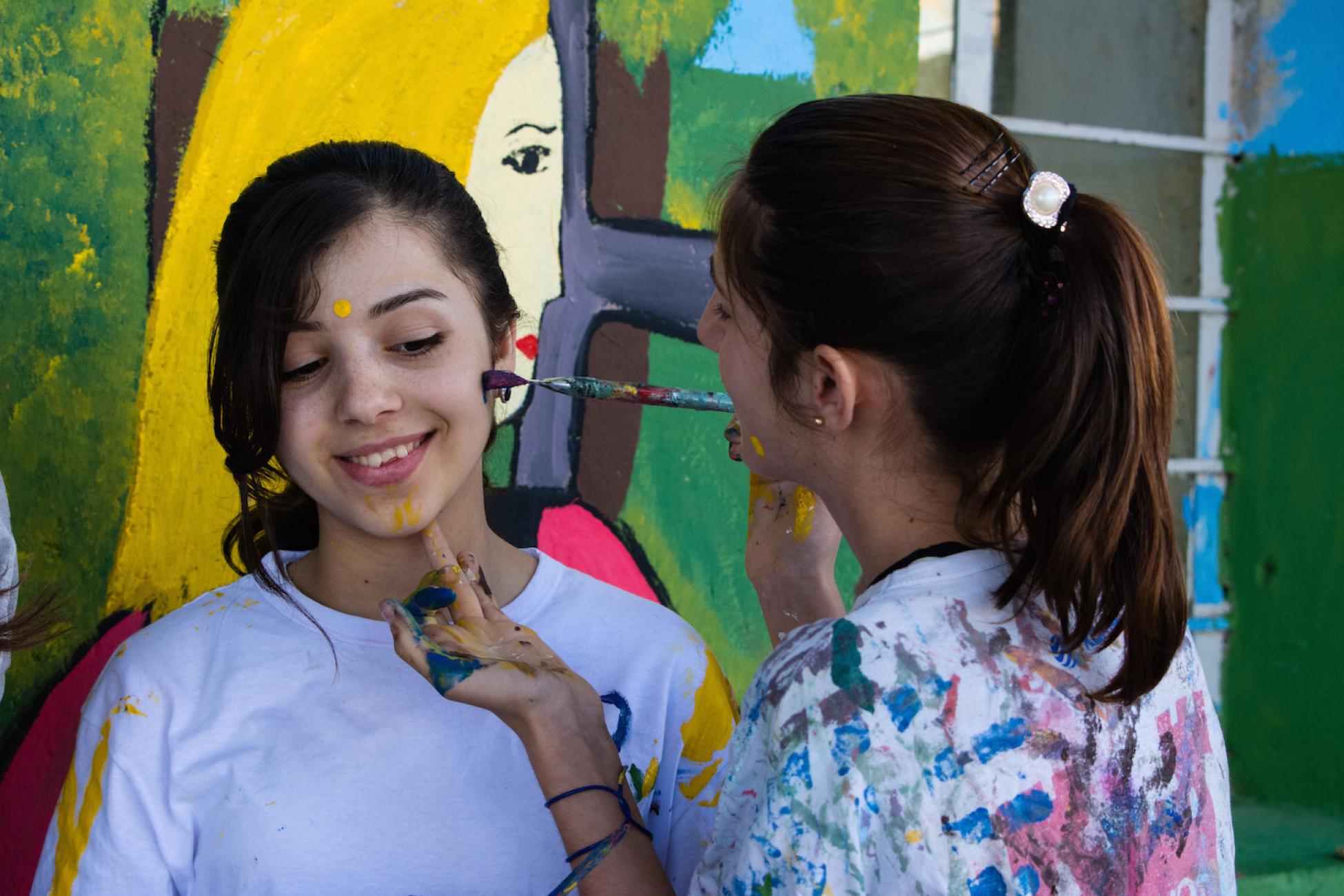 Volunteering with a project that turns refugee girls' drawings into murals.

In Iraq, the typical workweek is Sunday to Thursday, because Friday is the day of prayer in Islam. Apart from being my day off, Friday is my favourite day because I spend it volunteering with the Castle Art Project at the Akre Syrian Refugee Camp for the Rise Foundation.

The Castle Art Project is a low-budget project that takes a group of refugee girls’ drawings and turns them into murals along the camp walls.

Every Friday, I walk a mile to meet a few other volunteers, crawl into the back of a van onto a thin mattress, and drive a long hot two hours to the northwest corner of Iraq. At the Akre Syrian Refugee Camp, a former Saddam Hussein prison camp, we are greeted by a group of smiling and chatty children, who try to crawl into our van as soon as we open the doors.

The girls exude a strong sense of self-confidence as they paint; they rarely even let us help. It’s a power sorely needed after two years stuck in their situation.

From there, the day usually proceeds at a pace of controlled chaos. The girls and the program manager decide on which drawings to paint, we gather supplies, mix the paints, fend off the mischievous children who want to splatter paint all over themselves, and begin.

As the photographer for the project, I have a unique view on the project. The raw emotions apparent in the girls’ sketches grow as the mural does. The girls exude a strong sense of self-confidence as they paint; they rarely even let us help. It’s a power sorely needed after two years stuck in their situation. Truly, they are artists in every sense of the word. Not only does their work demonstrate talent, but it embodies the greater purpose of telling their story.

It is my impression that the project began as a way to improve the oppressive atmosphere of barred windows and cracked concrete walls. But it has clearly grown into a community gathering activity for the roughly 1,500 residents. As I pace from angle to angle to capture the best shot, I’m constantly aware of the constant stream of people leaning over the balcony or wandering out of their own homes to observe the mural’s progression.

Some are even curious about us volunteers. I learned this abruptly the first time I took out my camera and was swarmed by tiny hands clamouring to touch it. Every time, without fail, five or six kids want pictures of themselves, 10 want to take pictures themselves, and parents ask me to photograph their children.

They are also fascinated by a snake ring I wear on my thumb finger. Kids will come up and touch it, run and grab their friends, and come back up to show them. At first, I was confused as to why they were so fascinated by one small piece of jewellery (I wear a lot of rings). Later, I found out it’s because the camp has cobras and the children kill them to play with them as toys.

Typically, as the day winds down, we are dragged off to one of the family’s homes to have lunch. And I do mean dragged, because they send their four or five children to bulldoze us over, even if we’re not done painting. Language barriers prevent any prolonged conversation, but the connection is there. They show us pictures of their entire family, complete with their UNHCR paperwork. For some, it seems that these are the only photographs they still have left of their family members.

As we eat, our plates are continuously refilled until we beg them to stop, clutching our stomachs to show how full we are. Such generosity may not sound out of the ordinary, but these are not your average people. Coming from Damascus and the surrounding area in Syria, these people have seen a lot of violence and struggled to escape across the border into Iraq. The Islamic State, or ISIS, has destroyed their homes, their families, and their old lives.

That pain is ever present in the camp, but as my plate fills with food for the third time I realize so is grace. Yes, these people have experienced trauma that we, as Westerners, will never understand. But, they have also shown me benevolence that I can only hope to live up to someday.

Every Friday, they teach me more than I could ever hope to teach my own students. And so, Friday is my favourite day of the week because I get a lesson in the strength of humanity.

Taylor Smith is an Italian American living in Erbil, Iraq. She recently graduated from Emerson College with two degrees in Multimedia Journalism and Political Communication. Currently, she works as a teacher, freelance journalist, and documentarian for local NGOs.