You are here: Home/ Articles/ Work Abroad/ Blogs/ Life After the Killing Fields

Life After the Killing Fields 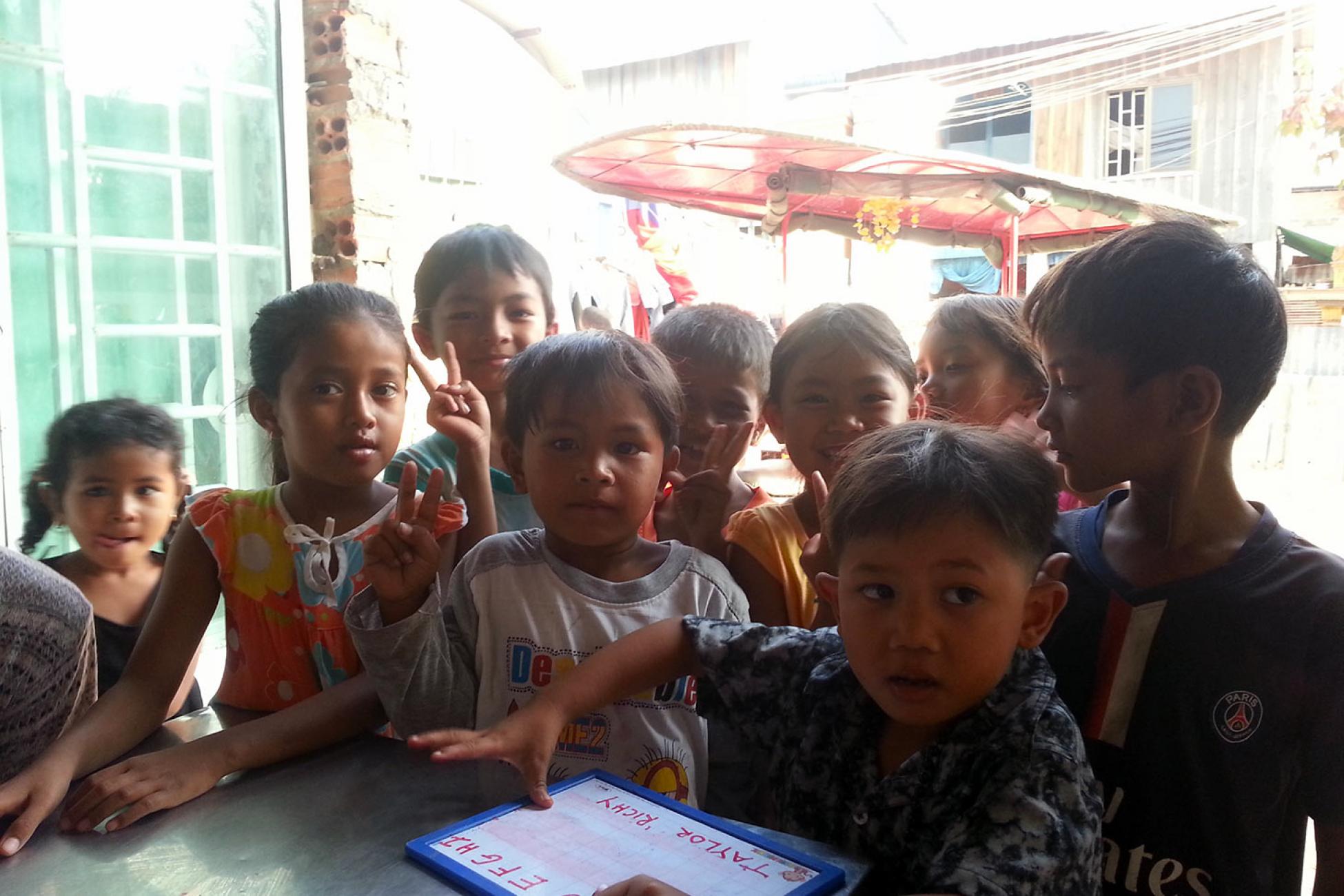 After two years working abroad, Taylor has one of her most rewarding experiences yet in Cambodia.

The other day was my hardest and best in Southeast Asia so far.

I'd just arrived in Phnom Penh and was halfway through my “detour” home to the States, after a year working in Australia. My boyfriend and I had worked our way north through Indonesia, Singapore and Kuala Lumpur before landing in Cambodia mid-February. We'd been in the country a week by this point, and I was beginning to feel frustrated at how hard it seemed to get ourselves off the tourist track, to start pocketing some “real” travel stories.

We'd reserved our second day in Cambodia's capital to witness the atrocities of the Khmer Rouge—something I felt a strong desire and responsibility to learn about, but that I knew would be a challenge to take in. We found a tuk tuk driver and agreed on a full day tour, first to the Tuol Sleng Museum and then to the Killing Fields, for $18. Our driver wore a bright red Puma t-shirt, flat cap, flashy shades and a fiery personality. He was friendly, but I was too busy mentally preparing myself for the sombre day ahead to have much conversation.

At the Tuol Sleng Museum, we walked around in silence with the other visitors, entering room after room of the former high school turned prison and torture centre by the Khmer Rouge, looking in the eyes of each prisoner in each of the thousands of mug shots. Staring back at me were expressions of defiance, anger, fear, defeat, or—hardest to understand—smiles. We walked through one floor where each room held a single bed and set of shackles, where high-ranking officers within the regime who were suspected of treason were chained and tortured. Above each bed hung a single photo, some showing a lifeless prisoner lying on the ground beside his bed, a pool of blood seeping away from his broken body.

After the museum, our driver motored us half an hour south of the city and deposited us at the entrance of the Killing Fields. With individual headsets we followed along the wealth of graphic information provided in the audio tour. Here it was harder than in the museum to shy away from the atrocities that happened on that ground just 35 years earlier.

During the three-year, eight-month and 20-day rule of the Khmer Rouge, some 20,000 individuals had their lives stolen from them and their bodies discarded into one of the mass graves at the Choeung Ek Killing Field. Beneath our feet, whole pieces of human bone were visible in the dirt. Our recording told us these continually push up through the soil, as if the souls of those who suffered will not lay silent. I saw scraps of cloth snagged on the roots of a tree by my side. They were remnants of the clothing worn by the victims during the final act of the Khmer Rouge, when the trucks were bringing prisoners so often that they stopped removing their clothes prior to execution.

The further you walk into the eerily peaceful field, the more horror stories you hear, the weight of each crime against humanity hanging heavier on you. I felt guilty that it was hard for me to listen, when for all the people who met their end in that terrible place, this reality was their only one. Later, I looked across the fields and at first saw just a few, and then hundreds, of tiny butterflies. Some were a pure pale blue, some all yellow or white, some with delicate patterns. I realized that I’d been surrounded by them the whole time. They darted silently up from the big holes left in the earth, now covered in grass, that mark the excavated graves.

We left the grounds and there was our driver, waiting patiently for his charges over a beer. As if the obvious conclusion to a sad day, suddenly we were being extended an invitation for dinner at his home and before I had time to think we were tuk tuking back across town, on a sudden adventure.

When we crossed the bridge over the river marking the city’s boundaries, I started to worry a little. A short time later, we pulled into the driveway of a narrow house off a back street in a simple neighbourhood. It was cleaner and quieter than the housing areas we’d seen in the middle of Phnom Penh, but still with the characteristic street vendors, stray dogs and symphony of sound and smell that give colour to Cambodia. As soon as we could hop out of our ride there were at least 10 children at our waists, giggling, dashing behind the tuk tuk, reaching out for high-fives, all very curious about the funny-looking guests their neighbour had brought home. They pointed to Richy's beard and called it yellow. It was show and tell and we were the coolest looking things on display.

And so the night unfolded: us and our driver, his brother, and another friend sitting around a foldout table we dragged into the driveway eating baby catfish, rotisserie chicken, rice, green mango, raw beans, miscellaneous spicy chilli concoctions and drinking Cambodia and Angkor beer. The gaggle of kids, who had gotten their hands on a small marker board, were the entertainment as they wrote out the English and Khmer alphabet, drew pictures and then handed the board to us for inspection. They sang us English and Khmer songs in a chorus line, complete with hand motions, and laughed as we tried to pronounce words in their own language. Every now and then our driver would hand over a wad of cash to one of his little minions and they would disappear down the road, returning with more fresh fish or 10 more beers.

After the sun went down it was decided we would move the party to the brother’s house around the corner, because his TV was working and there was a big Cambodia boxing match on against Thailand. We sat in a circle on his tile floor around communal bowls of delicious Khmer curry, passing around more beers, cheersing “Chul moi" and yelling wildly as Cambodia won every match.

When it was time to go, we shared hugs and promises to come back to their neighbourhood on our return to Phnom Penh. Our driver piled us onto the back of his motorbike and the three of us zoomed off, back over the bridge. Sandwiched in the middle on that ride across the river, warm wind in my hair and watching the life of the city fly by, I was on a high. We made a quick stop at a street cafe for some char grilled buffalo and one last beer, and, when we were finally dropped at our guesthouse door, exchanged hugs and bows and made plans to reconnect.

But we never were able to find our tuk tuk man when we came back to Phnom Penh later that week. I hope that he at least knows what he gave Richy and me by taking us to his home that night. He plucked two strangers off the tourist packed riverfront and deposited them into the real Cambodia, one centered around family and friends and taking care of one another, people who love any cause for celebration, who have had to rebuild their entire cultural identity after it was extinguished so harshly, and who have done so with smiles on their faces.