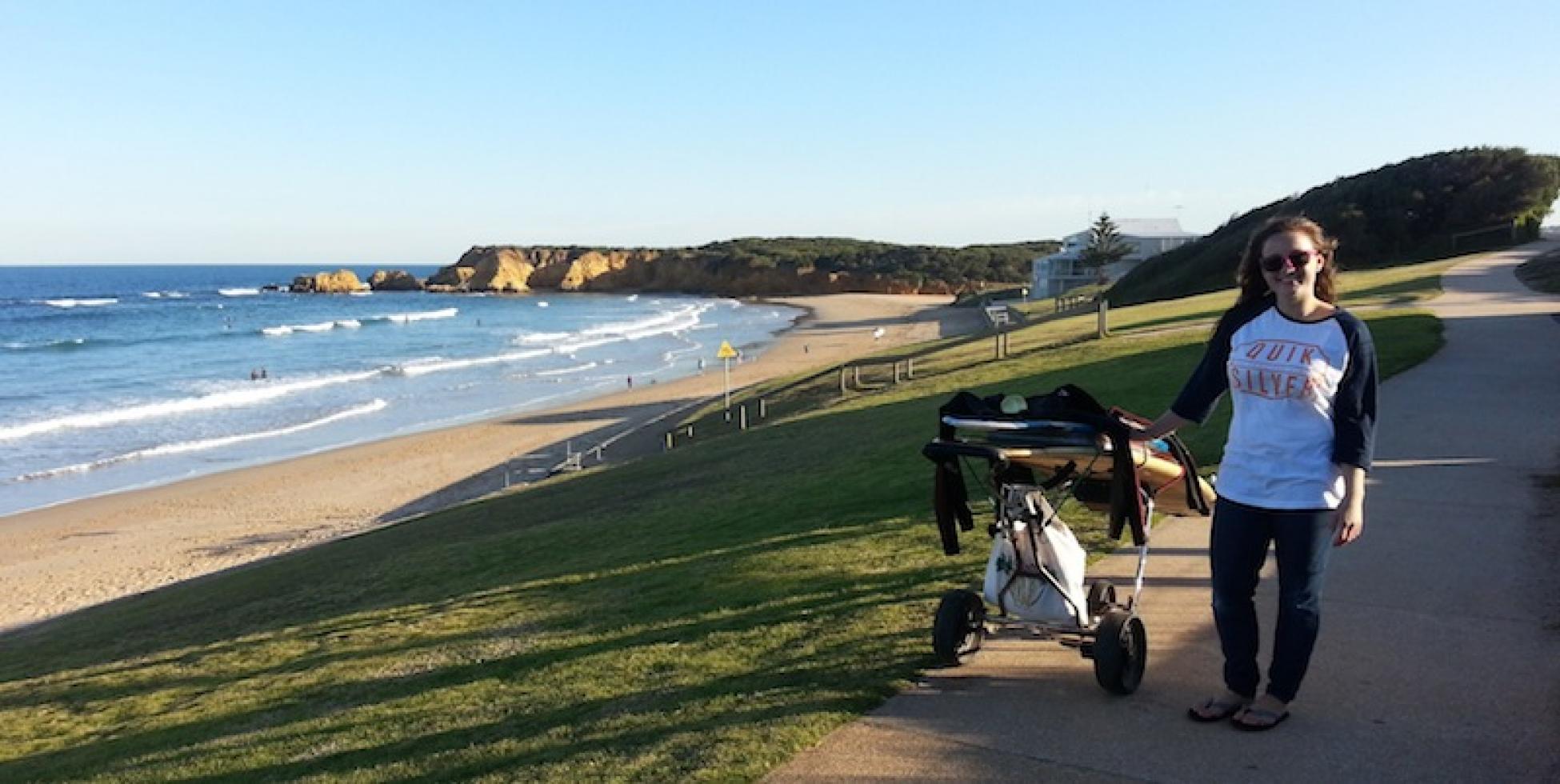 I was starting a slow peddle up the Beach Road incline when Richy yelled from behind me that he’d found something. I didn’t want to lose momentum though (rusty skills on the bike caused me a lot of grief those first few weeks), and almost didn’t turn around. Looking back, what a mistake that could have been.

“It’s exactly what we need!” Richy said as he parked his bike and ran across the street towards the golf bag carrier. He grabbed it by the handle and practiced wheeling it across the curb strip. We stood back and examined its three-wheel suspension system, the way it stood slightly higher on one wheel, the little black box on its back for putting things. I wondered if it was definitely on the curb as trash or if an elderly Torquay resident would stop us one day asking why we stole his favourite golf bag cart. Then we hooked it onto the back of Richy’s bike and rode home, with me far behind, watching the rusty apparatus bounce from wheel to wheel all the way down the busy esplanade.

The golf bag cart would become a surfboard buggy, the crown jewel in our ramshackle attempt to embrace the local sport of Torquay, the surf capital of Australia. It would hold the two boards we’d borrowed, “well-loved” and well pockmarked, and the second-hand wetsuits we’d bought from a man on Bell Street who had taped up the tears for free. Mine was a men’s suit and just baggy enough to let in extra icy water, deeming it basically irrelevant on very cold days. A couple times a week, all of these things were loaded onto our new buggy as we walked it 45 minutes to the waves, surfed for a few hours and walked it 45 minutes back.

The buggy was almost like having a car, in that it was a means for escape. Without it I had no obligations beyond the one-acre property where I lived and worked every day. I enjoy my job. I have a very relaxed schedule and work for a great family. I’m afforded luxuries at the B&B I know I won’t have anywhere else. But everything I could need, apart from a few groceries, is at this house and after a few days on the inside of the gate, you can feel the walls begin to close in. Surfing was free, fun and happily exhausting. It was the perfect outlet.

There were better, less crowded breaks to be surfing than the Torquay surf beach. But this was the only place our cumbersome cargo would allow us to walk to. It was perfect for our needs, anyway. Lots of other novices, no territorial locals, no reason to feel embarrassed every time you nose dive—which happened a lot. And there was always something to surf, a big change from my beach at home in New Jersey.

Living in Torquay and having an interest in surfing, there was much to be excited about outside of our own missions. First, there’s the fact that Rip Curl and Quicksilver were born here. The company headquarters sit up the road on the Surf Coast highway, along with the Surf World Museum, factory outlets and local board shops. But more importantly, just down the coast there is Bells Beach, the site of the longest running surf contest in the world. The Rip Curl Pro has been held every Easter since 1961 and draws the world’s best professional surfers to the cold Southern Ocean swells of coastal Victoria.

Anticipation for the event had been building since I arrived in March and, after following along on the webcast throughout the competition, I was able to head down for the final afternoon. I biked the length of Torquay and through the green hilly village of Jan Juc, then picked up the Surf Coast walk as it weaved around the cliff heads high above the dark blue ocean waters, all the way to the empty outpost of Bells. Once there, I joined spectators along the beach for the end of the men’s quarterfinals at Bells Bowl, and when the rest of the event was moved to Winki Pop, the break next door, migrated with the crowd to the big screen TVS near the winner’s stage.

It was a beautiful fall day sitting on that sloping car park above Bells, sun shining, all the local families gathered with their children, many of them still dressed in school uniform. I had a front row view for the awards ceremony as members of the local Wathaurong Aboriginal community offered gifts and painted the faces of the top competitors. With didgeridoo music playing in the background, Hawaiian Carissa Moore and Australian Mick Fanning took their turns ringing the historic bell trophy, one of the most sought-after prizes of the ASP world tour.

A week later, back at the Torquay surf beach, Richy wheels the buggy down the grassy slope of lawn above the bulkhead. We park the cart, un-bungee the boards, shimmy on our hand-me-down wetsuits and head for the ocean. The water biting at our toes is the coldest yet. Once all the way in, one of us says to the other, shivering, “Let’s give it at least 20 minutes.” But it will be more than an hour, a handful of times calling back and forth “just one more,” before either of us will step back onto the beach.