You are here: Home/ Articles/ Work Abroad/ Blogs/ My Short Career as a Tomato Picker

My Short Career as a Tomato Picker 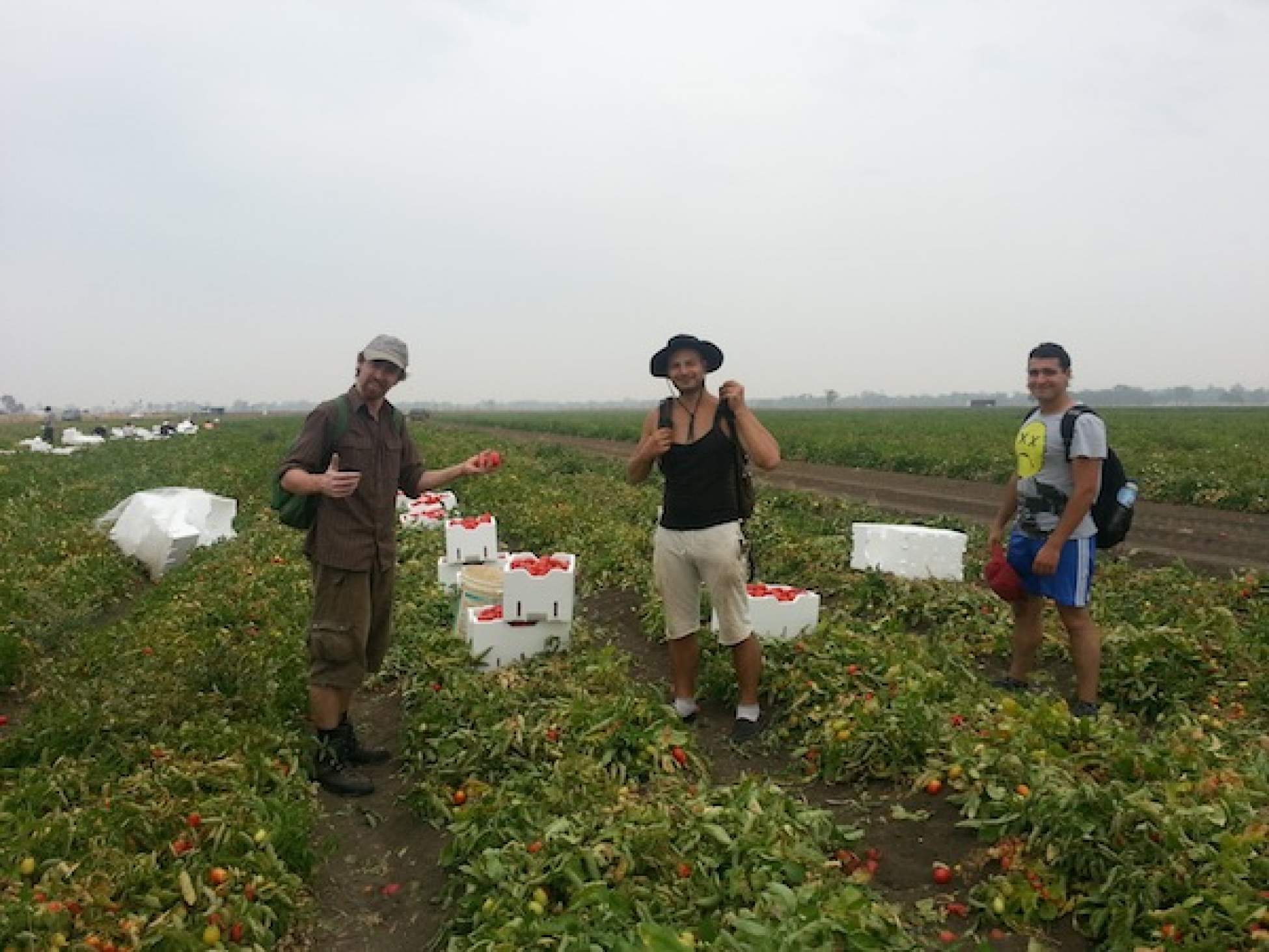 Taylor's partner, Richy, and two other pickers on the tomato farm.
By  Taylor St. John

After a successful work abroad season in New Zealand, Taylor lands in Australia. But her job search isn't going as planned.

A week and a half into my Australian working holiday, I found myself kneeling in the dirt of a farm several hours outside of Melbourne, swatting flies and trying to keep pace with the rest of the seasoned pickers. My knees bled with the red juice of unlucky tomatoes that crossed my path as I stumbled through the bed of vines. Behind me was a row of Styrofoam baskets that I’d already filled with the help of my boyfriend and teammate. Ahead was a tractor with a conveyor belt racing to pick up what we’d packed. I frantically counted the boxes before they could be scooped up by the machine. From each box, my share of the profit was a dollar bill.

This wasn’t exactly what I pictured for my first job in Australia. I had flown into Melbourne at the end of January hoping to find temporary work in the city or out on a farm. Not a tomato farm, but a cattle or dairy farm, like where so many of my friends had found placements. There I would be able to live with a nice family, save all my money and in a few short months, fly over to Western Australia to live on a beach.

After almost two weeks of hard job searching and no solid leads, my partner and I decided to bite the bullet and try fruit picking. It was harvest season and all across Victoria farms were looking for extra hands to pick grapes, tomatoes, figs, zucchini and other produce. We knew it wouldn’t be fun. We also knew it wouldn’t be very great money. But it would be something to get us started.

When we arrived at the Rochester caravan park that would be home for the next several weeks we were introduced to our Korean “bosses,” the contractors in charge of hiring workers for each of the farms. None of them spoke English, however we did all our liaising with a chain-smoking, purple-haired girl named Nicole, who had learned American English through schooling in Texas and Michigan. Nicole explained that we were to hand over rent in cash, along with a cash bond. She told us we would also receive our pay in cash, though the first payday wouldn’t be for another two weeks. That was the first sign something might be amiss. Work was expected to start in two days. In the meantime, there was nothing to do but wander around Rochester’s small downtown and wonder if we’d made a really big mistake.

I should interject here that not all fruit picking jobs are a scam. I have heard good stories, and I have heard bad ones. Many jobs pay by the hour and are much more regulated. For example, a nice Italian guy picking tomatoes in the row next to me spent time in the mango fields up north and earned over $20 an hour. And they gave bonuses! Nor do I believe our bosses intended to scam us. There was a whole ranking system in harvesting and if we were going to end up being short-changed, it was pretty obvious it would come from someone further up the line; the men in charge seemed as naïve as us, the workers.

At six am on our first day, five of us packed into the field manager’s car and rode the 20 minutes down straight stretches of dusty road passed acres and acres of undistinguished farmland. When we arrived there were already several different groups in the field. Various managers stomped past the workers calling out directions. I watched the fluidity of which these workers picked, checked and tossed, so effortless it was like an art form. No doubt their knees were not covered in tomato juice and bruises, as mine were soon to be. A large man from Istanbul showed our group how to pick only the brightest red fruit. Ones with yellow spots were called sunburnt. Many were too small. Some were holey. Only the ruby reds were good enough for the bucket.

Nicole had estimated that a single person could pick between 50 to 60 buckets a day. And each bucket would earn us $2. But as fast as I worked, I knew after half an hour things wouldn’t add up like I thought. First, we were told that the buckets were to be poured into larger baskets. Each basket held close to two buckets, and suddenly the rules had changed to $2 for the basket instead. As we worked away in the soil, farmers, the man from Istanbul, and whoever else pleased came by and told us that our baskets were not full enough or are tomatoes not nice enough. Once, the machine even bypassed our row altogether as if to say they were unsatisfactory. We were absolutely the low men on the totem pole here. Richy threw a tomato in the higher ups’ direction when their backs were turned.

At lunchtime we flipped over buckets for a seat and ate our sandwiches with the tomatoes. If there had been a decent wage and slightly better treatment, I think I would have enjoyed the hard work. I could have taken pride in my aching back and dirty fingernails. But at the end of the day our team of two had just barely managed 30 baskets. That was $30 for me, hardly enough to cover one night’s stay in the caravan park.

As we left the fields there was already an escape plan forming in my mind. We would work a few more days and then try to get paid early, pack our things and go. But back at the caravan park a strange event unfolded: we discovered a friend of the boss’s, drunk and sick off too many bottles of some sort of Korean sake, asleep in our bed. That gave us the leverage we needed. Our rent and bond were turned over and the next morning we were on the train back to the city.

There was no frustration over what a big waste of time our venture to Rochester had been. All we could do was laugh with relief. We were heading back to urban sprawl, back to our friend’s apartment by the beach, back to the job hunt.

A week later roaming through the produce section in the supermarket, I spy those Roma tomatoes being sold for $6.99 a kilo. Still waiting on that $30, I couldn’t afford to buy them.