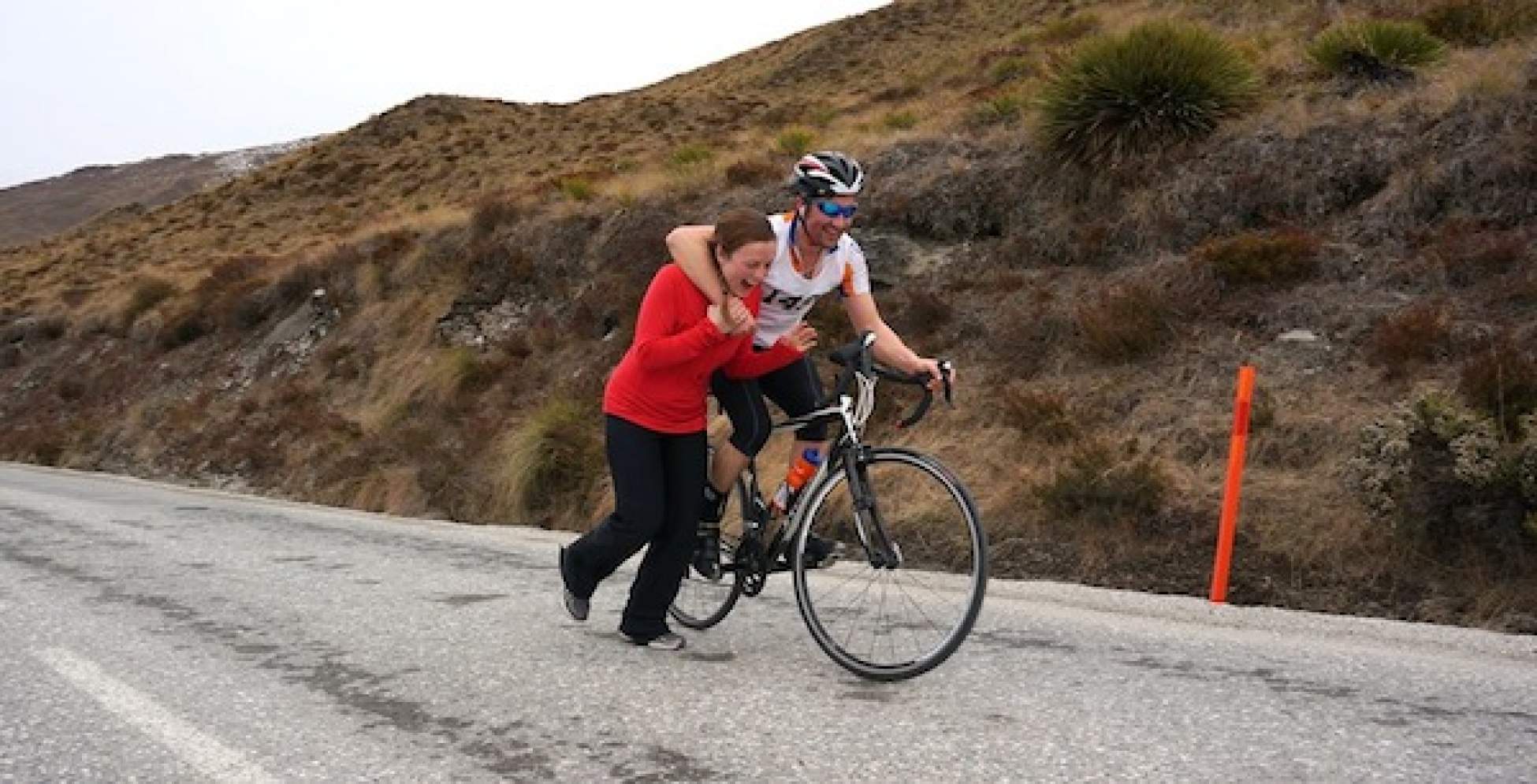 Victoria, with a teammate, competes in Peak to Peak.
By  Taylor St. John

Taking advantage of the great outdoors on the other side of the world.

Coming back for a second winter in Queenstown, the adventure capital of the world, it’s been an unofficial goal of mine to take more advantage of the outdoors. In the past few weeks the walls of my local gym have seemed to be getting smaller and smaller, and I’ve been eager to get out and try something new. So when a friend at work decided to put together a team for Queenstown’s iconic Peak to Peak race, I was all for it—or, as the Kiwis say, “getting amongst it.”

The relay, done in teams or as an individual (for the super athletes) goes from the Remarkables ski area on one side of Queenstown to Coronet Peak on the opposite side. Over the course of an afternoon racers ski, bike, kayak and run from the top of one resort to the base of the other covering a total of 44 kilometres.

Our team, “Powder to the Peak,” was formed only a week before the actual event and it wasn’t until a day before the race that I met the rest of my teammates. Together we were a Swiss skier, two Kiwi bikers, an Australian kayaker and an American runner: all a little naive and a little underprepared but psyched to get out there and test our luck against the other athletes.

On the morning of the event, the five of us sat at a corner table in a local café discussing the logistics of pick-ups and drop-offs, who had to be at what stations when, and how we’d all get up to Coronet Peak together in time to see our uphill biker cross the finish line. Walking past all the other racers with their well organized support crews, I couldn’t help but feel we were in a little over our heads.

In the end, though, everyone pulled together and supported each other from start to finish. While the first two teammates headed up the Remarkables, I drove out with Hugh, our uphill biker, and Viola, our kayaker, to the beach where our downhill biker would pass his bib over for the 7 km trip across the lake. We walked past a fleet of racing kayaks lined up along the waters edge—all long and sleek like toothpicks, with rudders for steering—to a tree where our borrowed boat was chained.

It became obvious that this was going to be our handicap. Our kayak was half the length and double the girth as any boat in the fleet, made for maneuvering through downriver rapids where the need for speed is zero. No matter, though, because just as we were getting our fill of funny looks from the other racers, our downhill biker pulled onto the beach in sixth place and the little blue bathtub took off with a hearty thump ahead of all the onlookers.

Nearly an hour later I stood with Hugh on the opposite beach, squinting out towards the water to try and make out a speck of blue coming around the Queenstown gardens. That head start was needed, because while Viola was powering through her leg of the race like a machine, the racing kayaks covered twice her length with the lightest stroke of a paddle. There was no chance of keeping up. Finally, we made her out in the pack and helped guide her in to shore. She handed me a soaking wet bib and I took off down the pavement for the second to last leg of the race.

Ahead of me was a 9 km route leading from the edge of Lake Wakatipu in the centre of town to the bottom of Coronet Peak’s access road. I’m not a fast runner at all, but the route was within my ability. My main obstacle was that as a flatlander from New Jersey, even the smallest hills are a challenge. I had run the route earlier in the week and knew when to push and when to save my energy, but as I crossed over the Shotover river canyons and wound my way up the curving Gorge Road towards the meeting point I was running out of steam fast.

Luckily my teammate, Hugh, who was waiting for me to begin his uphill bike, thought I might need a little push and decided to take a warm up lap in my direction. He pulled up alongside me as I panted through the last five minutes of the run, chanting encouragement and giving me that last bit of energy to get to the tag-off point.

As soon as I passed off the bib, he shot uphill with eyes on the finish line and I jumped in a car with the rest of our team to meet him at the end. Support vehicles were pulled off into every bay on the access road to cheer on their teammates as the riders slogged through the relentless uphill. Nine kilometres later, Hugh raced up Coronet’s steps and onto the snow for the finish.

Three hours and fifteen minutes from one mountain to the next. The five of us cracked a celebratory beer and cheersed our success. We weren’t the fastest by far, but it was an accomplishment for all, and since many of us hadn’t known each other 24 hours before, we felt incredibly proud of our team.

Participating in an event like Peak to Peak made me eager for more. New Zealand is such a welcome place to push outside your comfort zone. It’s a benign country, but one filled with so many endorphin-boosting thrills. Right now, in fact, I’m on my way to try my hand at the Kiwi national religion—rugby. This will be another first for me.  I don’t know the rules of the game, and I’ll be the smallest one on the field, but it’s all a learning experience, right? Get amongst it!