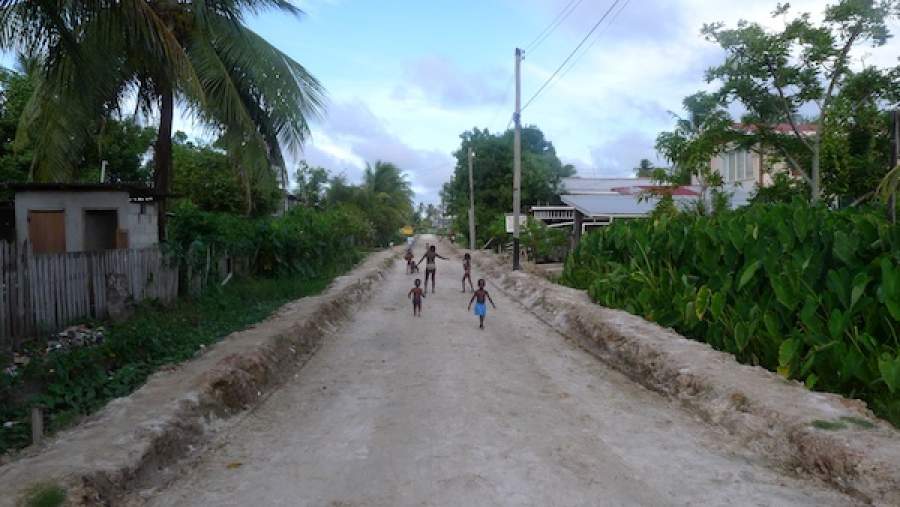 Children dance outside in the streets of Cove and John, Guyana.
By  Andrew O'Dea

In the land of lush rainforest and friendly smiles, Andrew reflects on what the phrase "third world" really means.

Is this the real life?

Freddie Mercury sang it first, but I feel similarly since I’ve landed here in Guyana. It’s one of those things that you wait so long for and when it’s finally upon you it seems too good to be true.

That’s how my first week in Guyana has been—almost like a fantasy. Everybody says that there is going to be a huge culture shock when you arrive in your host country. I don’t know about culture “shock,” but it was very apparent that we weren’t part of the culture right as we took off from JFK airport. I was one of two white people on the plane—the other being another volunteer that I flew down with—headed to first Trinidad and Tobago and then further to Georgetown, Guyana. It definitely attracted a lot of questioning looks.

However, the first thing we, Leah (one of the other volunteers from Newfoundland) and I noticed is that people here are incredibly friendly. The amount of smiles and “Good mornings/afternoons/nights” makes it a very welcoming place. There is never a shortage of chatting either. People of all ages seem all too happy to answer questions, or just simply engage you in a conversation.

I say there are some surreal elements to this trip mostly because I feel like I’ve landed in some type of utopia. I know, you probably think I’m exaggerating. How can that be when I’m staying in a developing country, right? Well, I guess it depends on what perspective you have. Although I researched Guyana before travelling here, I didn’t learn what it was actually like until I got here. They do so many things here right! If you’re looking for a sustainable country, look no further. According to Guyana’s Tourism Department, 80 per cent of Guyana is covered by untouched Amazon rainforest.

In saying that though, mining is responsible for a sizeable portion of the country’s GDP and there are also a lot of sanitation issues regarding waste disposal. I don’t want to make it seem like there aren’t problems, but I just want to highlight some of the progressive steps that this “third world” country is taking towards a more sustainable future.

After talking to some locals, they say that the biggest problem lies within the country’s politics. (What country’s doesn’t though?) The one thing that they say is a constant, though, are their environmental policies. Not only that, but they have many NGOs for sustainable development that employ local people throughout the country. They are very self-sufficient here, partly because of past policies on importation, but they seem to have had a lasting effect on society where almost everything is grown or made locally.

Not only do the communities here seem to have a lot of things figured out, but where they live is so lush and vibrant that it adds to the beauty—our accommodations definitely do nothing to hinder it either. We are living under the Guyana Women’s Leadership Institute, which is a government-run operation and therefore has grounds with 24/7 guards. It is nice for the safety aspect, although there is also the fact that it isolates us a little as well. It is beautiful here, though. The institute is located in an old colonial plantation house and is surrounded by an abundance of beautiful flowers, fruit trees, and gardens.

This first week was our orientation week, so it was mostly filled with getting to know who we’re working with and learning about the work we’re going to be doing. So to make it clear, I’m a Youth Challenge International volunteer working with the Youth Challenge Guyana affiliate and, through them, focusing on projects with the Mangrove Protection Agency.

A lot of our work will consist of community awareness about the importance of the mangrove ecosystems, as well working directly with the protection and restoration of the mangroves. On top of that, we will be doing some work at the Women’s Institute as well. There were a few delays because the days we were supposed to travel to the mangrove reservations there was torrential rain, so we are a little late starting the actual work. This has given us time to perfect our house keeping skills—or improve on them at least.

Finally, I couldn’t ask for a better group dynamic. There are only three volunteers here and we’re all from Eastern Canada with roots in Newfoundland. There is Leah Tomblin, Evan Hollihan and our “parent figure” from Youth Challenge Guyana, Tygue Legall. I’ll be referencing them throughout the next two months, so you’ll be well acquainted with them by the end of it.

With all of the housekeeping things now summed up, it’s time to get to the grittier part of our time here! Wish us all luck!