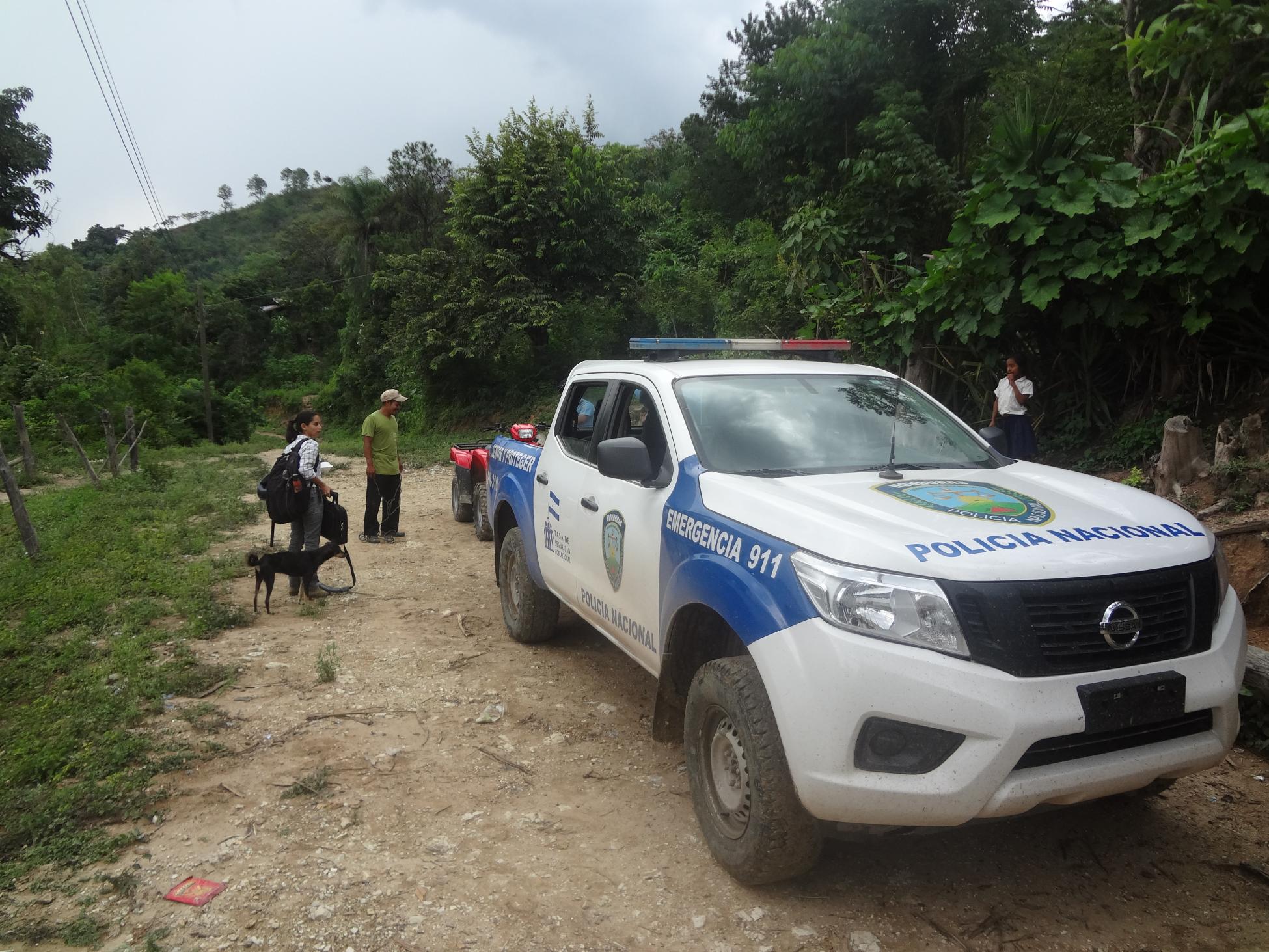 At the end of our saga, the police arrived. Daniel Sarvestani
By  Daniel B. Sarvestani

The day I came face-to-face with social injustice.

Working alongside communities facing discrimination and oppression is not a walk in the park. You may get involved in unexpectedly complex situations, as I discovered for myself during a recently.

Being aware that indigenous communities experience racism on a daily basis is one thing, but seeing real people taking the brunt of it is quite another. It can be a rude awakening to the fact that sympathizing with victims of discrimination in the abstract is much easier than sharing the pain being felt by those you are trying to help.

In August, I travelled with a colleague to Tepexco, an isolated Maya Chorti community. On motorbike, we made our way to the small village to hold a workshop on women’s rights, maternal health and the rights of the child. However, the only road access to Tepexco crosses a series of privately owned lands. The local landowners are a group of influential families who have lived in the area for some time, and have had a tense relationship with their indigenous neighbours for the better part of the last 10 years.

We didn’t experience any problems on our way there, but getting out was a different story. We had planned to return to the OCDIH (Organismo Cristiano de Desarrollo Integral de Honduras) office around noon to pick up some food for the workshop participants, but discovered that the motorbike had broken down. We had no choice but to call a colleague and ask him to bring the food in by cab.
However, as our rescuer headed towards us, the neighbouring landowners blocked his way. Some time ago, they had illegally built a series of lockable gates on the only road leading to and from the community—which is home to more than 500 Maya Chorti—effectively isolating them.

Our attempts to contact the landowners and reason with them was met with a stock answer: “The landowners do not trust the Maya Chorti, they think they are bad people, and they refuse to let any public transportation reach the community across their lands.”

In a story that is as old as the world, a handful of wealthy landowners are openly depriving hundreds of men, women and children from essential services.

This restriction is a form of punishment devised by local landowners to cause hardship to the Maya Chorti community in retaliation for perceived wrongs suffered by the landowners over the years at the hand of the area’s indigenous population. The land disputes between the two groups have gone on for a long time, and the large landowners have found the best solution is to keep the small indigenous farmers in a virtual state of siege.

In a story that is as old as the world, a handful of wealthy landowners are openly depriving hundreds of men, women and children from essential services, and holding them hostage simply because the ancestral rights they are claiming interfere with the contemporary entitlements that money can buy.

On that frightening, eye-opening day, we had to spend two to three hours on the phone trying to reach an agreement with the landowners while, back in the village, the women and children attending our workshop realized that the food was not going to arrive, and went home. My colleague and I found ourselves stranded in a community we knew very little about. What made matters even worse was that a rainstorm was approaching, and that we had to move fast. Having failed to get the landowners to change their minds, I had no choice but to call emergency services. By the time the police arrived and actually forced the gates open, it was late afternoon. Had we waited any longer, travelling back from the village would have been impossible on the flooded dirt road.

Based on my discussions with Tepexco community members, this situation has been going on for the past three years. As local authorities are not taking any steps to correct the situation, the landowners feel free to place any road blockades they like. There have also been assassinations and murders, and many community members suspect the landowners of having sponsored such criminal acts, and therefore cannot put their faith in a police force that feel may be doing their bidding.

My colleague also pointed out that the reason the police had come to our “assistance” was not in compliance with standard procedure, but because they had been informed of the presence of a foreign human rights advisor: yours truly. I was told that the police are more responsive to complaints when the safety of foreigners—particularly U.S. citizens—is involved.

How could anyone justify that, in this day and age, local authorities and police forces can ignore the basic needs of their fellow citizens just because they happen to belong to an indigenous community? That question is not just philosophical: it has real-life implications. Over the past few years, the road blockade that I experienced has caused the death of a pregnant indigenous woman who was unable to reach to a public hospital in time for a safe delivery, and the death of an indigenous child with appendicitis.

My own experience of the Honduran road blockades made me realize more than ever before the ignominy of a situation where an entire people such as the Maya Chortis can be despised and deprived, and I could see that my own sense of powerlessness and anger was a reflection of the feelings that these populations must experience after generations of abuse at the hands of landowners and other groups whose interests they are perceived to be threatening. The injustices one can witness today are similar to those that began some 500 years ago when the Americas were invaded by foreign explorers who felt they had to look down on indigenous populations in order to be able to loot their lands in good conscience.

The plight of indigenous communities is real, very real, too real. It amounts to a slow genocide, and every effort is being made to hide the violence that minorities are suffering under our very eyes. In this new era of communications, many platforms exist to bring this crime to the open and to denounce the mindset and actions of local authorities who, short of dealing with indigenous communities at the barrel of a gun, see to their gradual extinction by denying their basic human rights.

I have written this report of my recent experience as an active humanitarian worker in a threatened Central American indigenous community not only to help raise general awareness, but also in the specific hope of being able to connect with the appropriate legal institutions to seek justice for the imprisoned community. Indigenous people need to have open and free access to public services. They need to live free from discrimination and violence on their ancestral lands. They need to be freed from the tyranny of the landowners who are forcibly isolating them from the rest of the world.

It would be too easy to capitulate by saying that the rich will always oppress the poor, that such is life and that nothing can be done about it.

And there can never be peace without justice.