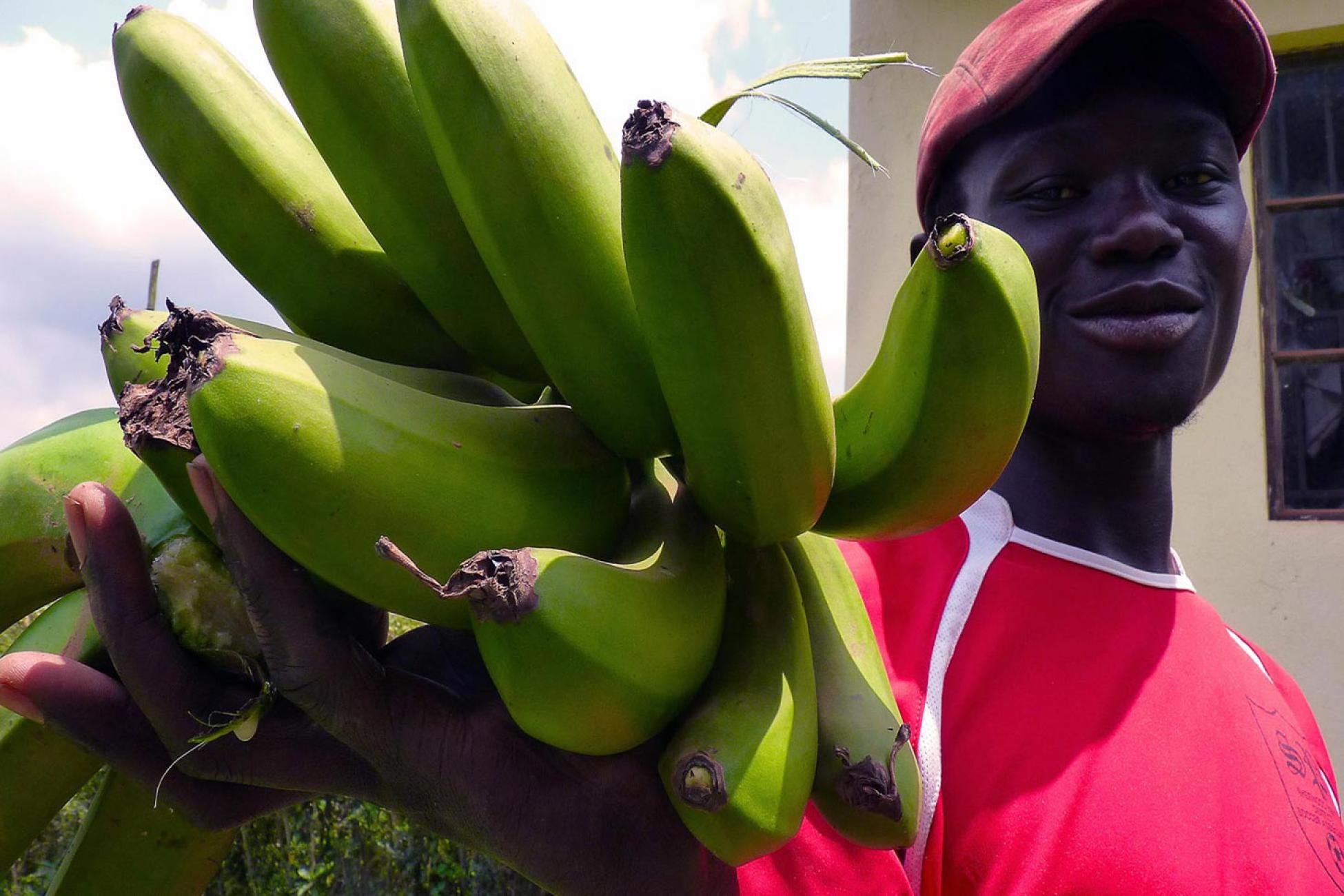 A Ugandan man harvests "matooke" - known as 'food banana' - from his garden in southwestern Uganda.
By  Trina Moyles

When I first came to Kabale, a small town-centre tucked away in the south-western corner of Uganda, I was determined to learn Rukiga, a dialect belonging to the Bakiga ethnic group.

I remember flipping through a copy of a friend’s English-Rukiga dictionary and scouring the pages for agricultural related words that would be useful when interacting with farmers. Sorghum, omugusha. Maize, ebicoori. Chicken, enkoko. Beans, ekihimba.

My finger ran up the “B” page in search of one of Uganda’s most common food crops. Shortly after arriving in Uganda, I realized I would need to know how to say “banana.”

Along the eight-hour bus ride from Kampala to rural Kabale, my eyes had gotten lost in the fields of green leafy fronds and “hands of bananas,” as they’re called, weighing heavily on the trees. I saw men pushing and riding bicycles loaded with bananas. The fruit was stacked in the hundreds on truck beds, destined for city markets. Women sat by the sides of the highway, selling hands and baskets of green and yellow and even red bananas.

Bananas, I quickly learned, are of utmost importance in Uganda. Bananas occupy the largest area of cultivated land in the country, making the equatorial country in East Africa the second largest producer of bananas in the world. It’s the food security crop that sustains the majority of Ugandan families throughout the year and generates the most amount of income per yield: one “hand” of bananas earns a farmer between 15,000 to 25,000 shillings ($7 to $10 CAD). Ugandans use banana plants in non-edible ways, too. Peels are fed to livestock, and the strong fibre is used for thatching roofs, weaving baskets, mats, ropes and even jewellery.

“Aha – banana!” I said aloud, pinpointing my desired word on the dictionary page.

Instantly, I frowned. I didn’t see a single word, simple to master and memorize. Instead, I encountered a thick tangle of linguistic possibilities for banana in Rukiga and the unfamiliar words blended together like a colony of black ants.

After I realized that I probably wouldn’t ever use the word banana correctly in context, I abandoned my beginner Rukiga frustration for admiration, instead.

I was reminded by an example that I’d come across years earlier in a linguistic anthropology class at university. Bananas to Ugandans–so it seemed–were something like the snow to the Inuit. The Inuit people are indigenous to Nunavut, a territory in northern Canada, that is climatically characterized by snow, ice, slush and 50 other Inuit words to describe that “cold white stuff.”

“Matsaaruti” is an Inuit word for “wet snow that can be used to ice a sleigh’s runners,” while “pukak” is used to describe the “crystalline powder snow that looks like salt.” There are more ways to say snow in Nunavut’s Inuit dialect than in English, much like there are far more ways to say banana in Rukiga in Uganda.

Obviously, this linguistic discrepancy is reflected in statistics. In Uganda, the average per capital annual consumption of bananas is the highest in the world. Compared to Canadians, Ugandans peel and eat 20 times more bananas, 365 days of the year.

And clearly, Canada’s frigid temperatures and the 53 different ways to say snow have something to do with English’s poverty of ways to say banana, too. Banana “trees” (which are not really trees, but actually classified as herbs) require 14 months of sun and heat to bear fruit. A Canadian farmer would have to go bananas before growing bananas.

The banana that Canadians know, say and taste is grown and transported from Latin America, Africa, Southeast Asia and other Banana Republics around the world.

Though we call it a banana, Canadians should really call it a Cavendish. It’s the variety of banana most common in North America and Europe and accounts for 40 per cent of the export production of bananas worldwide. Why? It’s less perishable. It doesn’t ripen and rot before reaching the brightly lit produce sections of grocery stores in the Global North. As a result, global banana producers, like Chiquita and Dole, grow Cavendish as a monoculture crop: one plantation with one fruit and one name, as we don’t know it. This is Canada’s banana.

Before travelling to Uganda, I didn’t even realize how deprived my Canadian tongue had been of saying and tasting the multitude of bananas grown and sold in the markets here.

Five delicious syllables that roll off the tongue. The Rukiga word kabaragala is used to describe a pinkie finger of a banana that’s eaten in two to three bites and screams sweetness. Consequently, it makes the Canadian’s Cavendish taste like damp cardboard.

But banana diversity in Uganda isn’t only about stimulating the taste buds, I’ve learned.

Ugandan farmers have taught me that diversity is important for building resilience against major threats to the banana’s longevity, namely diseases, including the Panama Disease and Bacterial Banana Wilt, which are caused by soil fungi and the transfer of contaminated banana material from plant to plant. These diseases have crippled farmer’s production around the world and threaten the very existence of the edible banana.

So will the word banana even exist 100 years down the road?

Well, according to researchers, the “Canadian banana” or the Cavendish, isn’t likely to survive another decade, let alone another century. Grown in a monoculture, a crop of one name, it’s prone to be decimated by disease and plague. The Cavendish will soon disappear from the English language, though, ironically, most Canadians never even knew the true name of their beloved banana from the get-go. Most likely, it will be replaced by the next Cavendish.

Words to say banana in Uganda; however, are far more likely to endure and linger on the tongues of Ugandans (and lucky travellers) for many years to come. While the dictionary listed 16 ways to say banana in Rukiga, researchers claim that there’s actually over 84 distinct varieties of bananas in Uganda. The majority of Ugandan farmers grow at least two to 38 of these banana varieties on one plantation, cultivating true diversity and resistance.

Realistically, a good handful of these banana varieties will survive into the next century.

My next question is: how many ways can you say “sustainability” in Uganda?