You are here: Home/ Travel Intelligence/ Why We Travel/ Surviving A Season as a Fire Tower Lookout

Surviving A Season as a Fire Tower Lookout 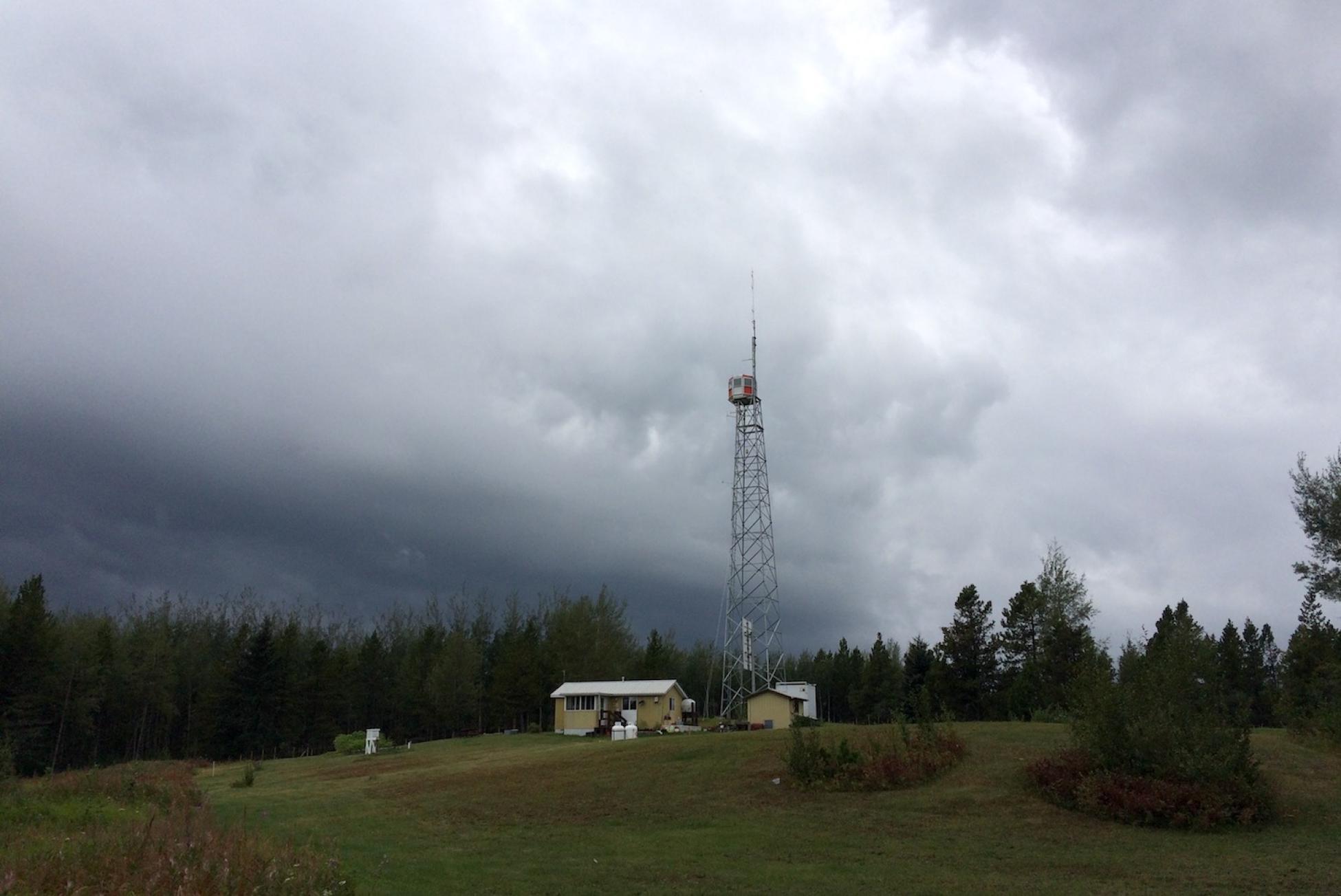 How a decade of international work and travel helped me survive four months alone in Alberta's boreal forest.

At first, I thought that being a fire tower lookout in Alberta’s boreal forest was the antithesis of travel. I spent my childhood and adolescent years in Peace River, a small town in the north, camping, paddling down the river and casting fishing lines into reed-edged lakes. My fire tower was located only a couple hundred kilometres to the north. Compared to the many other places I'd worked and travelled—Guatemala, Nicaragua, Costa Rica, Cuba, Uganda, Rwanda, Ireland and India— this was just a stone’s throw away from my childhood home.

When I was 14, I first learned about lookouts and the unique role they play in detecting wildfires in Alberta. I read Burning Ground, a novel written by Pearl Luke, an Albertan lookout. I imagined Luke up in the tower, penning prose into her notebook, then stopping to scan the surrounding forest for smoke. Over a fire season, she lived in the forest for up to five months. I always longed to follow in Luke’s footsteps, but I wondered, could I handle it?

In my 20s, I hesitated to apply. I worried that I’d miss out on experiencing what I loved about travelling and working abroad: the opportunity to encounter new people and cultures, explore different landscapes, thrust myself into challenging situations and speak different languages.

Years later, with my passport saturated with overlapping stamps and visas, I decided to give my childhood dream a shot.

Last April, I packed my belongings—boxes of dried food, clothes, bedding, books, a dog named Holly, a 12-gauge shotgun and a ukulele—into a bright red helicopter and flew north. As the chopper roamed farther away from any trace of human civilization and deeper into the sea of trees, I realized I was travelling to the strangest place I’d ever been; one void of humans, grocery stores, restaurants, running water, electricity and flushable toilets. I was about to step into the most bizarre job of my life.

My fears scurried back and forth like mad rodents. I felt nauseous. Where was I going? What had I gotten myself into? What if I got lost? What if I was attacked by a bear? What if I let the forest burn down? How would I survive alone out here?

I’d encountered this kind of irrational fear before, years earlier, sitting on a plane, palms sweating, and descending on a bustling city in East Africa. It was the same nervousness I’d wrestled with in the moments leading up to being catapulted into a new culture for the first time; the same anxiety I’d tried to swallow down before wrapping my clumsy tongue around the words of an unfamiliar language.

I realized I was travelling to the strangest place that I’d ever been; one void of humans. I was about to step into the most bizarre job of my life.

I’ve always felt a surge of fear before going to a new place. The fire tower was no different. My heart was pounding in the cavity of my chest as we landed at our destination: an oval-shaped clearing in the bush with a small, one-room cabin, an outhouse and a steel-framed tower. The pilot and forest ranger unloaded my boxes of provisions, along with a few buckets of potable water, and then waved goodbye.

“Well, good luck,” said the ranger, a burly man, giving me one last smile. Then he added, with uncertainty in his voice: “Hope it works out for you.”

The red helicopter lifted off and became a tiny dot above the treeline before being swallowed whole by the distance. And then it sunk in; I was alone. There was no one to save me, no one to help solve the problems that I’d be sure to encounter. It was just me, my dog and the few belongings that I’d brought. Despite my best intentions, I had done it again; I was the traveller balancing nervously on the precipice of the unfamiliar. And—forgive the vulgarity here—I was scared shitless.

Suddenly, my survival skills and instinct that I’d developed from my years of working abroad kicked in.

Take a deep breath, I told myself. Focus on your immediate surroundings. What do you see? What do you need to do? The rain barrels at my cabin were bone dry. Just like the days I spent living in the BOSAWAS rainforest in northern Nicaragua, I couldn’t just turn on the tap and – presto! –water! Supplies of food and water wouldn’t be flown into my tower for another 30 days. Just as in many of the countries where I’ve worked, water was a precious resource at the fire tower, something to be valued and measured carefully. So I found an old wheelbarrow and set off with empty buckets, in search of a water source.

Learning to expect the unexpected

The following morning at 7 am, my first day on the job began. Clipped into a safety harness, I slowly ascended the 100-foot tower up to the cupola, my dome-shaped office where I would sit and look out, searching for smoke. The fire hazard level was deemed as “extreme” for the day, so I would spend nearly 14 hours up in the sky, watching the horizon for signs of smoke.

On my fourth day on the job, I spotted an unfamiliar tuft of white on the far horizon. I spun the fire finder—a giant compass that sits in the middle of the cupola—around, looked through the lens of a scope, and lined up the smoke in the cross-hairs. My hands trembled, reaching for a pencil to write down the degree of the smoke. I estimated a distance: 50 kilometres.

I picked up the radio, hands shaking.

“Fire Centre, this is XMA567,” I heard myself say. “I have a pre-smoke here.” It was a new language for me; the language of detecting and responding to wildfires in Alberta and communicating with my colleagues solely over the radio.

“Go ahead 567,” the dispatcher replied. I listed off the coded details. Fifteen minutes later, a helicopter zoomed by my tower, in search of the smoke. “567, we’re not seeing anything,” said the pilot.

Turns out I had reported a smoke that was well over 80 kilometres away from my tower, a fire in another district; one that had been reported three hours earlier. My heart sunk at the verdict. Rookie mistake! I remembered the words of Tim, a seasoned lookout who trained me in early April. “The real test of being a lookout is if you can learn to live with your mistakes,” he said.

Immediately, I knew what he meant. Living and working alone—and calling all the shots on my own—was enormously stressful. The weight of making a mistake was magnified by the psychological challenge of being completely alone for days and months on end.

Every day at the fire tower—135 days to be exact—was like that. Something unexpected would happen: a black bear wandering into my yard, or a snowstorm arriving in the middle of the night, or my roof leaking, my solar fridge failing and food thawing, or the tower getting struck by a terrifying bolt of lightning. Some days, I felt loneliness crawling all over me. I longed for the comfort of being with another human being. I craved the ease of taking a hot shower in town.

When I experienced this level of discomfort I always turned to past travel experiences. What did I do when I was robbed in Central America? How did I manage my feelings of homesickness and cultural isolation in East Africa? How did I stay grounded while negotiating unfamiliar, bustling streets in India? I asked the questions that all travellers ask when faced with challenge:

What are my needs? What resources do I have? How can I get through this?

After surviving my first season at the fire tower, I look back and appreciate the days of fear, loneliness, uncertainty and exhaustion that I experienced. I feel the same way I’ve felt when coming back from another country, or territory—proud of my ability to survive on my own and grateful for the amazing views and gifts offered to me.

On my second last morning at the tower, I woke early enough to climb the tower in blackness and watch the sun emerge on the horizon. The beauty of the forest, the view and the stillness of the morning made my whole body ache with joy.

Even in my own backyard, I realized, I was the traveller; revelling in the hardship and elation that can only come from thrusting one’s self into something unknown.

This article was originally published in Verge Magazine's digital edition in 2017.