You are here: Home/ Articles/ Beyond the Guidebook/ Palming Off the Problem

Palming Off the Problem 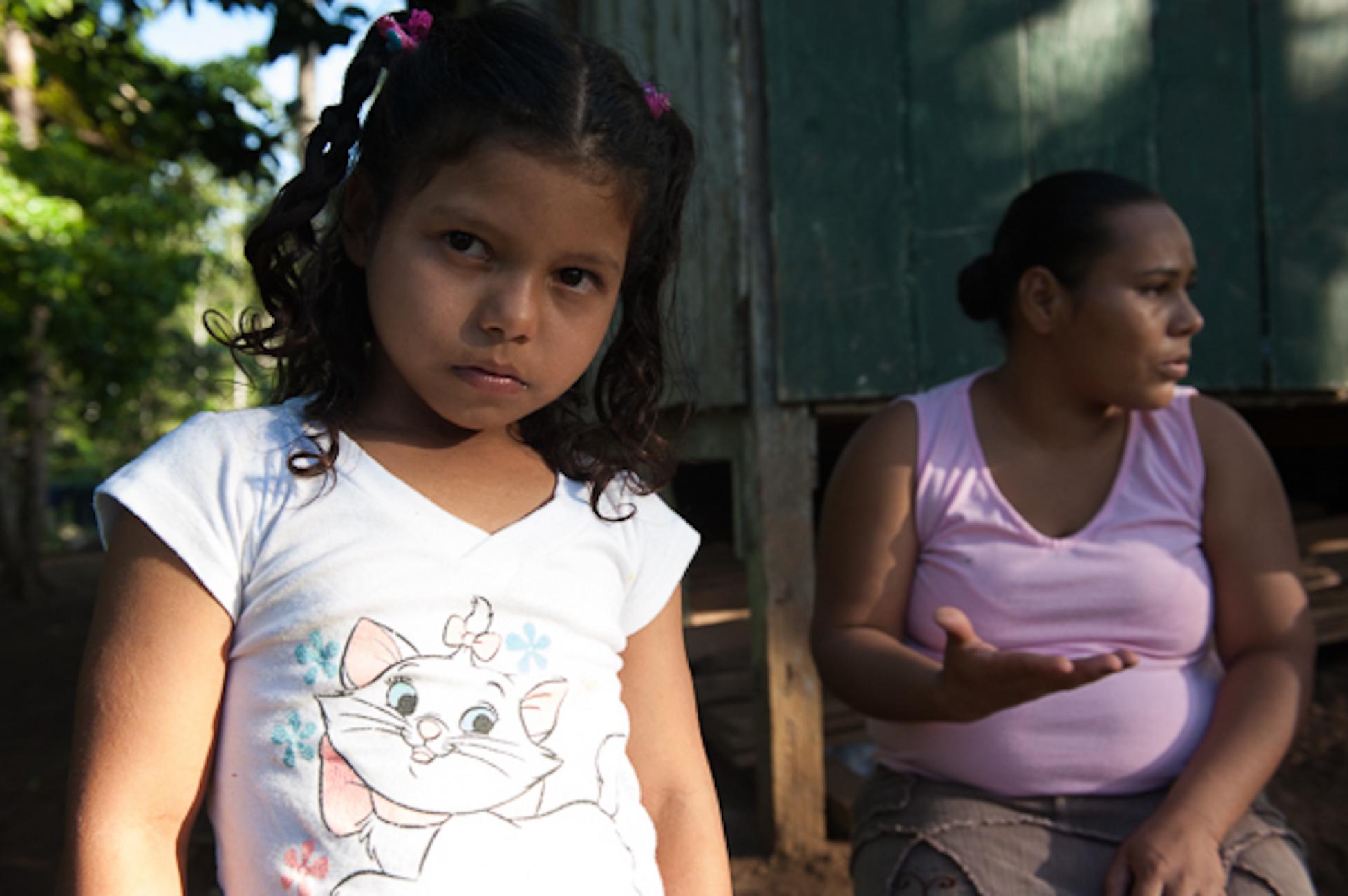 Campesinas in Nicaragua face uncertainty as a consequence of the palm oil industry. KJ Dakin
By  Trina Moyles

For poor farmers in Nicaragua, palm plantations mean environmental destruction, chemical exposure—and a paycheque. Is there an alternative?

Our 4x4 negotiates the rain-soaked path that was crudely cut into the tangle of rainforest. Foliage whips against the truck’s side. We are travelling to the village of Marlon Zelaya to interview a group of campesinas about the palm oil industry in the Rio San Juan rainforest.

The Rio San Juan is the second largest biosphere rainforest in Nicaragua, spanning 7,000 square kilometres. In addition to being one of the most biologically diverse regions in Central America, the rainforest is a vital carbon-sink for absorbing greenhouse gas emissions and an essential drainage basin for the Rio San Juan River, a massive waterway that flows between Nicaragua and Costa Rica.

My travel companion is Horacio, a Nicaraguan agronomist with Centro Humboldt, a Nicaraguan-based environmental NGO that is also a fierce critic of a company that operates in the rainforest basin, producing oil from African palm trees. “The Company has a monopoly on la palma production in the region,” Horacio explains, “The campesinos either grow palm for the company, or sell their land and work for them.”

The “Company” is Palmares del Castillo S.A. PALCASA, a Nicaraguan-owned entity that bought up the land in 2007. Today PALCASA is tapping into palm oil—a multibillion-dollar industry that’s on the rise—by cultivating over 3,600 hectares of African palm trees. A common ingredient in nearly 50 per cent of Western household goods, palm oil can be found in washing detergents, cosmetics and cleaning agents. It can also be processed into ethanol, a biofuel that’s being touted by international governments as an alternative to fossil fuels.

But Horacio and Centro Humboldt are not convinced. They argue that the short-term benefit is taking a serious toll on the sustainability of the delicate rainforest ecosystem and the long-term development of poor, subsistence farmers.

According to a report by Fundacion del Rio, between 1983 and 2009, the Rio San Juan lost 60 per cent of its tropical rainforest cover, in part due to the palm oil industry practice of slashing and burning forests, and replanting them with palm trees in the ashes that remain. It is a sobering statistic for Nicaragua, which ranks as the world’s third most vulnerable country to experiencing extreme climate changes, according to the 2013 Germanwatch Global Climate Risk.

An industry that helps or harms?

Nicaragua is the second poorest country in the Western Hemisphere, based on GDP per capita and has one of the highest child malnutrition rates in Latin America. Aside from subsistence farming, there are few jobs in the Rio San Juan, a situation which often forces people—mostly men—to cross the San Juan River illegally in search of work on coffee and citrus plantations in Costa Rica. The alternative is staying in the Rio San Juan and working in the palm oil industry.

“It’s risky—they use a lot of chemicals,” says Ixsa. Her husband has been unable to work for a week due to a chemical burn on his arm.

Such is the case for the women I meet from Marlon Zelaya. I sit with them, a small group of campesinos, outside a family’s modest wooden home. “Most of our husbands work in the palma,” says Socorro, a 35-year-old woman. “The company pays every 15 days, which is good. It gives us the means to buy food.” The women tell me their husbands earn 80 córdobas a day, around $3 US dollars.

“But it isn’t ideal work,” protests Ixsa, a 20-year-old woman and mother of two children. Her voice trilled like a small songbird. “It’s risky—it’s true they use a lot of chemicals. The workers risk exposing their hands, skin and lungs to chemical exposure.” Ixsa explains that her husband has been unable to work for a week due to a chemical burn on his right forearm.

“There’s advantages and disadvantages,” comments an older woman called Juana. “Bueno, the company, provides work for our men and women, too. But they also cut down the trees, they clear land and they use chemicals, which run-off and pollute our streams and rivers. No es fácil; it’s not easy.”

The women’s concerns echo recent findings from a study by researchers from Stanford University and the University of Minnesota on the social and environmental impacts of the palm oil industry in rainforest communities. While no studies have yet been conducted in Nicaragua specifically, researchers found that palm oil management practices in other rainforest communities—including land clearing and heavy pesticide application—had contaminated waterways and dramatically altered ecosystems in Indonesia.

Critics of the African palm oil and biofuel industry have also pointed out that clearing vital rainforest actually creates “carbon debts” and, in turn, aggravates the effects of climate change. The planting of a palm forest increases carbon emissions, destroys biodiversity, and creates “debts” which the benefits of biofuel production (rather than fossil fuel production) will not repay for generations—nearly 170 years in some cases. Such is the case in Rio San Juan, where palm oil production has taken precedence over the rainforest for more than two decades.

Horacio and his colleagues at Centro Humboldt are actively working to discourage farmers from selling their land to the company and working in the palma plantations.

“You find a poor campesino has sold all his land to the company,” says Horacio. “He works for labour, but the pay isn’t enough. Before he could grow some food on his land, but now the money he earns isn’t enough, the cost of food is increasing and he has no land.”

Horacio wants to take me to Boca de Sábalos, a small town-centre, to see a community-led alternative to the African palm oil industry.

Centro Humboldt’s project, a Cocoa Farmer’s Cooperative, began in 2007—the same year PALCASA bought up 2400 hectares of forest. Today it has a membership of 300 farmers who are growing cocoa.

Horacio explains that if a farmer cares properly for a cocoa tree, it can produce for up to 40 years, whereas palm trees only produce for 15 years. While palm oil workers only earn $3 U.S. per day, cocoa farmers can potentially earn double that amount over the course of a season. Cocoa also poses less risk of causing environmental degradation, as farmers don’t have to clear cut forest for planting, or use heavy applications of chemical fertilizers and pesticides. Studies also show that organic cocoa is more adaptive to the effects of climate change, including higher temperatures and lower rainfall.

At the cooperative, I meet one of the farmers, Josefa, who along with her husband, had been growing cocoa for over seven years. “[Growing cocoa] has helped us to avoid having to sell our land, or work for ‘the company,’” she explains. “Even on a small piece of land, if you plant cocoa, the benefit is yours.”

Volunteer in the Rio San Juan Rainforest of Nicaragua

Centro Humboldt is a United Nations award-winning NGO with over 20 years of experience promoting community development projects that go hand-in-hand with environmental sustainability and preservation.

In the Rio San Juan region of southern Nicaragua, Centro Humboldt supports COSEMUCRIM, a cooperative of cocoa farmers in the rainforest ecosystem, which has been operating in the region since 2006. The cooperative is made up of 300 local cocoa producers who sell their beans at a guaranteed price and collectively access larger regional and international markets.

Adventurous travellers can visit COSEMUCRIM’s cocoa collecting and processing centre, located in the small town of Boca de Sábalos and request a tour of their facilities. Cooperative representatives provide hands-on tours (Spanish-only), where you can learn about the various stages of harvesting, fermenting and drying cocoa beans, and how Nicaraguan farmers are benefiting from growing cocoa.

Although Centro Humboldt does not offer a formalized program, they welcome students, researchers, journalists and other interested parties as volunteers. Programs—including fees, activities and placement length—can be tailored according to individual or group needs. If you’re interested in short or long-term volunteer opportunities on cocoa cooperative initiatives, please visit Centro Humboldt’s website and contact their coordinators for more information.