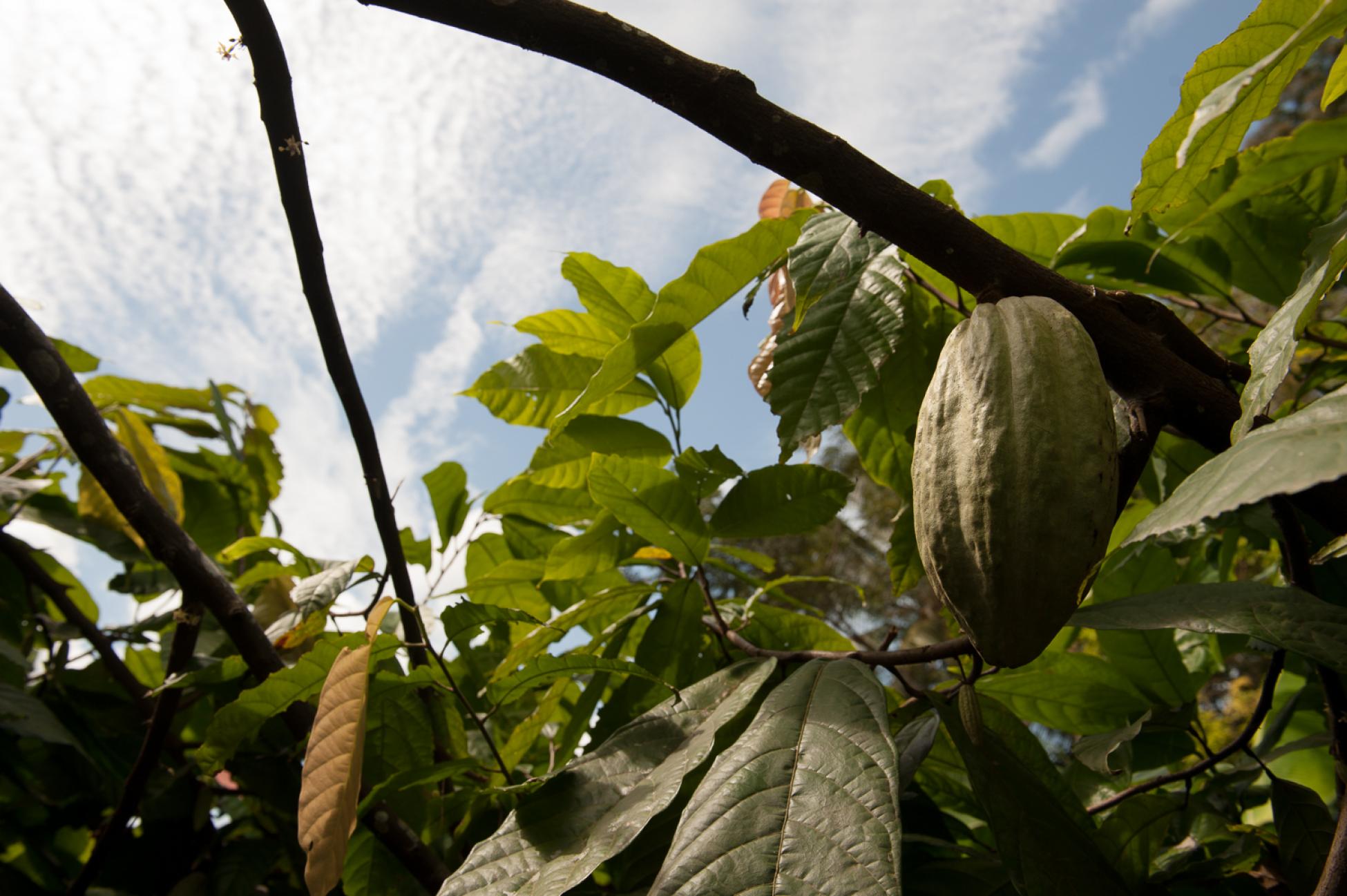 Money doesn’t grow on trees, but chocolate sure does. The raw form of chocolate, anyways.

In the Rio San Juan department, women and their husbands are farmers of cacao—a small tree that loves the hot tropics and the shade and soils of rainforests and bears the forbidden fruit that Eve really meant to pick in the Garden of Eden. The elongated cacao fruit is bright red when ripe. Though it requires three years of growth from seed to seedling to production, it can be harvested every 15 days (during season) for nearly 10 years.

That’s a sweet selling point for small-scale and subsistence farmers in the El Castillo municipality who traditionally grow beans, rice, corn and yucca for their family’s survival and are vulnerable to poor yields, low returns and the poverty trap.

It’s also a sweet deal for the environmentalists who are concerned that Nicaraguan farmers are encroaching on the rainforests and polluting streams and waterways that feed into the San Juan River, which forms a natural border between Nicaragua and Costa Rica. The forest is protected by national legislature on paper, though not always in practice. The Indio Maíz Reserve is Nicaragua’s second largest rainforest biosphere, spanning 4500 squared kilometres and is home to over 400 species of birds, including the nearly extinct green parrot.

Centro Humboldt is a Nicaraguan non-profit organization that has a 15-year history of promoting social and economic development and protecting the country and region’s most essential natural resources, forests and waterways. In 2012, Humboldt began supporting a local cacao cooperative in the Rio San Juan department. A few months ago, I had the opportunity to visit Humboldt’s project and meet with many of the marvelous chocolate farmers face to face.

In the rural community of Las Collinas, I spent the morning at the humble home and farm of Doña Teresa, a campesina of rice, beans, maize, vegetables and cacao. Teresa lives with her husband and three sons and had invited other guests, too. In true Nicaraguan spirit, this wasn’t just a farm visit—this was a farmer’s fiesta! I was surrounded by a group of 15 chattering, exuberant women dressed in skinny jeans, tank tops and rubber boots. The women were farmers and the compañeras (wives) of farmers.

As we sipped on the most delicious leche de chocolate (chocolate milk) and devoured tostadas (rolled tortillas, stuffed with chicken and peppers), the women weren’t interested in talking gossip. Rather, they wanted to trade secrets in tomato and cabbage production. They were part of Humboldt’s cacao cooperative project in the Rio San Juan department, which is made up of 300 producers from twelve communities in the region. Many had been growing cacao for over seven years, I learned, though some had only eagerly begun.

Doña Teresa and her husband had been growing cacao for over seven years. She walked me through their garden of “chocolate trees.” The trees were small with branches that seemed to hunch and hover around the trunk of the tree. At the trunk, the trees bore many immature, green fruits. Every tree held approximately eight to 10 fruits.

“Give them another week,” Teresa told me with a smile, although she could already taste the promise of another sweet harvest.

Teresa shared with me the advantages for growing cacao in a rainforest environment. One, the tree doesn’t require full sunlight. It can grow in the shade of other trees, which means farmers don’t need to cut down trees, slash bushes and burn brush for planting. Two, you can grow vegetable crops in the understory to maximize use of land. Three, you don’t disturb the delicate rainforest soils by planting and uprooting, planting and uprooting, as the tree can produce for over a decade. Four, through the cacao cooperative, farmers are feeling a positive economic return, which mitigates the risk of farmers clearing and destroying the rainforest’s precious resources.

And finally (and these are my own personal thoughts speaking) what greater joy is there than growing one’s own chocolate?

One of the older women farmers, Doña Josefa, had also learned the art of making chocolate. After harvesting the cacao fruit, she’d ferment, dry, toast and grind the large seeds into a fine powder. She’d boil the chocolate into liquid and dry in bars, or mix the powder into mugs of with hot milk and cinnamon. Doña Josefa sold her chocolate products in the local market, while the cooperative’s products negotiated deals with German-giants like Ritter’s.

Later that evening, I took to the peaceful waters of the Sábalos River, a small river lined by rainforest, which feeds into the thick vein of the San Juan River. On the riverbank, the dueña (owner) of a small wooden boat handed me a crudely carved paddle. It was heavy in my hands and painted a cheerful shade of bright blue.

As I set out on the glassy surface of the river, reflecting the enormous biodiversity of the trees, ferns, plant life and the flutter birds, my nervousness transformed into ecstasy. The river gave me her chorus of wings, frogs, crickets, and birdsong echoing against water. My paddles etched into the water I was here.

The sky put on a dramatic show for me, highlighted in shades of pink, orange and blue. The only thing that could have tasted sweeter than the moment was the same fruit and product that was protecting this very forest and all her biodiversity.