You are here: Home/ Articles/ Volunteer Abroad/ Blogs/ Living on the Safari’s Edge in Uganda

Living on the Safari’s Edge in Uganda 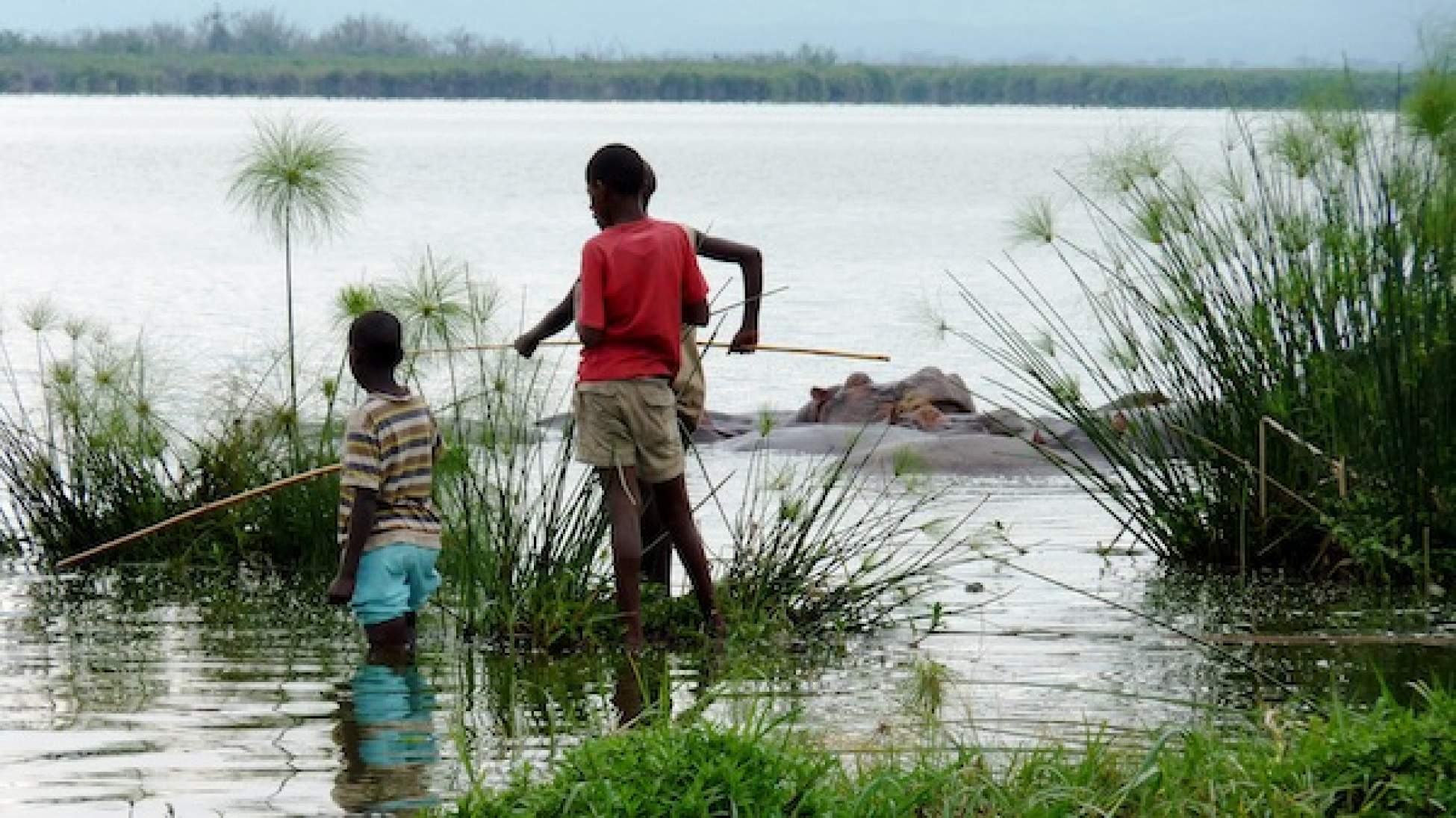 Ugandan boys fish along the edges of Lake Edward.
By  Trina Moyles

For communities living on the edge of animal territory, nature rules.

The first time that I saw a family of elephants emerge silently from the thick stand of spear grass that was lining the thin stretch of highway outside of Queen Elizabeth National Park, located in the Kasese District, my childish instincts leapt unconsciously out of my mouth.

“Elephants!” I squealed aloud to my companions. We all jumped up from our seats in the tour van, with our heads poking out of the pop-up roof, cameras and binoculars glued to our faces. I had to pinch myself that I wasn’t at home, watching Animal Planet or skimming the flashy pages of a National Geographic magazine.

While I didn’t come to Uganda for the thrill of the African Safari and instead for the desire to participate in exciting community development work with the Kigezi Healthcare Foundation (KIHEFO), I would be lying if I wrote that seeing elephants grazing with their long, wrinkled trunks in their natural habitat (versus balancing bouncy balls on their trunks in a North American zoo) has been a unique part of my experience living and working in Sub-Saharan Africa.

When I first laid eyes on the gold and green hues of the savannah, I was hooked.

It’s true that the African savannah is a landscape unlike any other and inspires the eyes at any hour of the day. In the morning, the birds and mammals are at their most active behavior, stirring with the mist against the indigo skies that begin to mix with the light. At 6 a.m., I saw a lone female hyena galloping awkwardly in the first hour of daylight, and it crossed the highway with a few quick strides. It soon disappeared into the dried yellow grasses, keeping low to the ground, and most likely following the lions and hoping to scavenge some of their leftovers.

By midday, the savannah is lit up on golden yellow grasses and spots of electric green. I love the giant cacti trees that emerge from the earth and shoot forth many protective arms. These trees are home to many birds and even the elusive leopard, as it hides them away during the press of the hot sun and the visibility of daylight.

In the evening, the sunsets are idyllic, pure poetry—and once again, the wildlife stirs. Packs of female lions go on the prowl and the hippos, appearing like gigantic, wet rocks, return from the river channel that connects Lake George and Lake Edward to graze.

But aside from the thrill of seeing birds and animals in their natural habitats, what’s been equally, if not more, intriguing has been learning about how Ugandan communities on the edge of savannah landscapes are interacting, day-to-day, with the safari wildlife. For example, there aren’t any fences around the perimeters of Uganda’s largest national park, Queen Elizabeth National Park, to prevent animals from moving and migrating into human settlements. Instead, there are small, concrete blocks, painted white, that demarcate community territory from the national park territory, and a single dirt road used by tourists and community members, as well. While adventuring on a game drive and scanning the landscape for animals, it’s not at all uncommon to spot a man riding a bicycle with a load of large bunches of matooke (plantain) for sale in one of the 11 communities that border the park.

It made me marvel at how differently tourists and locals interact with the savannah landscape. While it’s illegal for a tourist to set foot outside their vehicles, it’s (apparently) no big deal for a local to do what they’ve always done—transport food to the communities. According to one of Kigezi Tour’s guides, the locals rub a salve, made from indigenous herbs, all over their bodies, before moving through lion territory, and the smell repels the lions.

Though, of course, attacks on human settlements do happen. As many of the ethnic groups living around the park herd cows and goats, it isn’t easy keeping hungry lions away from their livestock. In the past, when herders have lost a cow to the prowl of lions, communities have retaliated by poisoning upwards of six lions, which is devastating from a conservationist’s perspective, given that the lion population has diminished significantly over the past decades to around a population of 90. Obviously, the Ugandan Wildlife Authority has their work cut out for them.

In Kasenyi, a fishing village that’s situated on the edge of Queen Elizabeth National Park and alongside the shores of Lake Edward, I saw a group of boys standing ankle to knee deep in the waters lined with green reeds, and fishing using locally-made rods. I was stunned to see, less than two meters away, a group of hippos, resting at the shoreline.

To a tourist, they were barely visible. Their pink-grey backs were lifted just slightly above the water line, and they were heaped together like a clustering of large, wet rocks rising from the lake. Occasionally, they snorted and water sprayed from their large nostrils. To the local boys, they knew the hippos were there, and they seemed to be watching them carefully, though it wasn’t interrupting their regular fishing activity. It struck me as symbolic—that image of the boys fishing and the hippos resting—of the normalcy of Ugandans living beside the potential threat of Nature against Humans.

From what I’ve learned about the communities living around the edges of national parks throughout Uganda, it’s never easy negotiating with nature, especially when nature is in the form of a hippo, or lion or elephant for that matter. It’s made me think a lot about my responsibility as a visitor to Uganda to reflect more critically on the reality of the tourism industry and the management of land. It’s made me think that I ought to put down my camera and binocular, and ask the locals about the challenges associated with living next door to the lions.