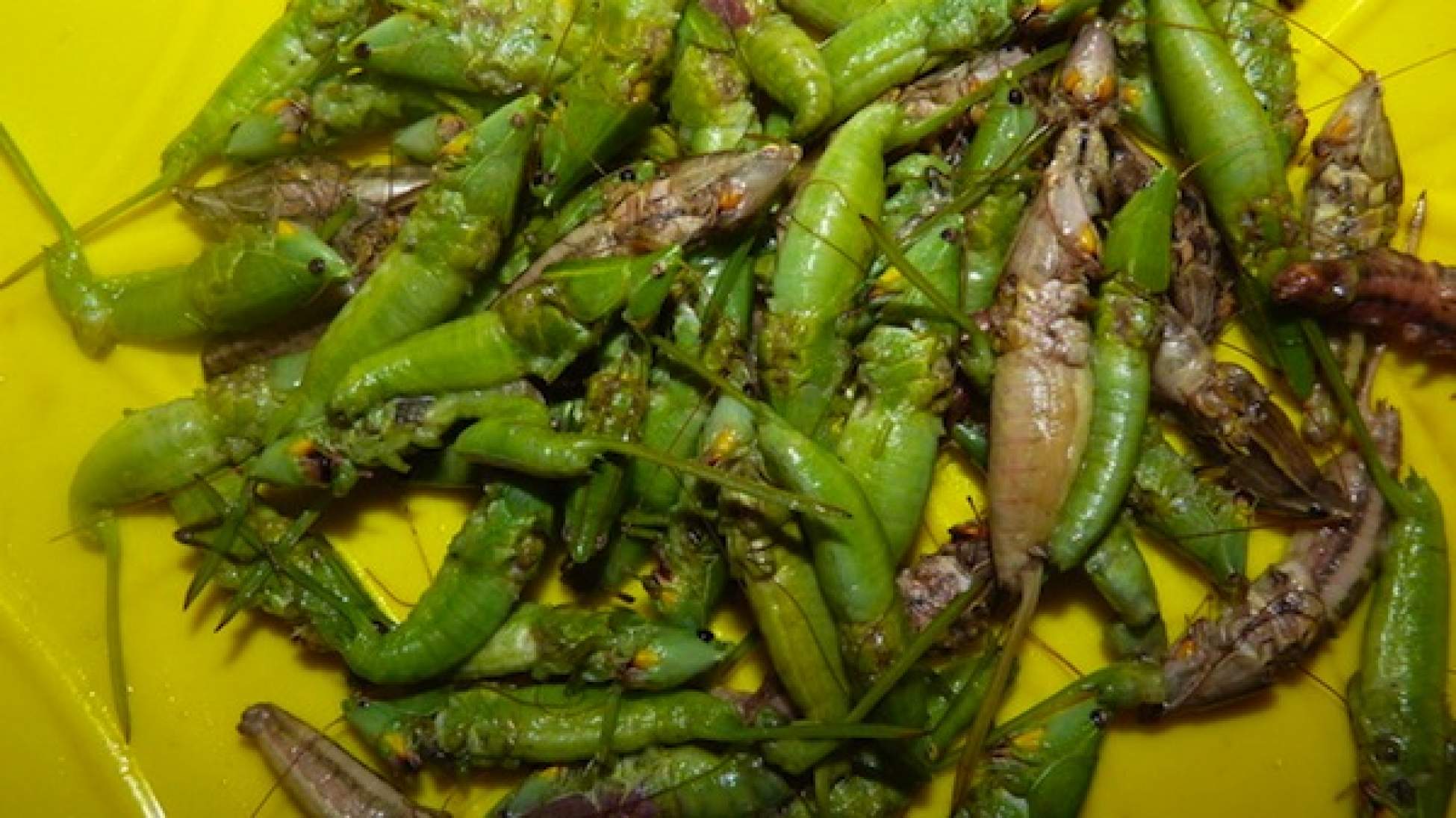 Nsenene is culinary treat in Uganda.
By  Trina Moyles

November is a month to harvest, de-wing, fry, sell, devour and celebrate a Ugandan cultural delicacy. Grasshoppers, or nsenene as it’s locally known, flood the humid airs of the year’s second rainy season, and Ugandan trappers take to the fields and streets in the masses. The days of November mark the rising demand for the nation’s most beloved edible insect, and there’s a buzz of activity surrounding their capture, sale, distribution, preparation and culinary enjoyment.

Having grown up in Canada, I had never (intentionally) eaten an insect in my entire life—but I wasn’t so squeamish to miss out on experiencing grasshopper season for myself. Perhaps there was a part of me that felt a bit like a television contestant on Fear Factor (coming eye-to-eye with a golden fried hopper before stuffing it in my mouth), but I cast that aside, issued a small prayer (“I hope it tastes like chicken”) and did as most Ugandans do. And truthfully, I can report that my first grasshopper season will not be my last.

Nsenene is a cultural delicacy in Uganda that’s been enjoyed by the masses for many centuries. Grasshoppers come out after the rains, meaning Ugandans wait for a mini-season in May and the true season in November.

It’s an unregulated industry and many different people of different income levels participate. Children catch the hoppers with their bare hands, women harvest with nets, and more serious business folks set up large sheet metal panels that are attached with simple light bulbs, which attract nsenene and capture them in large barrels at night.

In town, women congregate outside the central fruit and vegetable markets, and lay out green, brown and yellow grasshoppers on woven trays. They sell nsenene in any quantity, even for a spoonful—just a seasonal “fix” for even those with the fewest coins in their pockets. Children and women carry hoppers on their heads, hawking plastic bags of the edible insects to eager passersby.

Ugandans prepare nsenene in various ways, though the most common is to fry them with onions and garlic and bit of lard and salt. I can say with certainty that these bugs are packed with flavor and make a unique, off-the-wall (literally) party snack. But not only are they saturated with flavor, grasshoppers are also an excellent alternative protein source. In April 2013, the United Nations released a report about the future of edible insects as an ethical, more sustainable protein source. Grasshoppers, after all, don’t have much of a carbon footprint when you compare them with the impact of raising cattle for beef.

While for the world’s majority, eating bugs is no big deal, Western cultures tend to place taboos on eating tiny winged creatures that are typically swatted away or squashed underfoot. But the UN report suggests that Westerners should get on board with enjoying grasshoppers, grubs, beetles, spiders and so forth, and look to countries such as Uganda, whose long-standing tradition of eating insects and grasshoppers is profitable for income, health and hunger.

After tasting on the unique culture and flavor of Uganda’s month of grasshoppers, I can definitely say that seeing insects on the shelves of grocery stores in Canada in the future won’t gross me out in the slightest. These little buggers are a tasty treat and Ugandans excitement for the humid days of November is 100 per cent justified. And for the record, they do taste like chicken. Catch, de-wing, fry and enjoy.