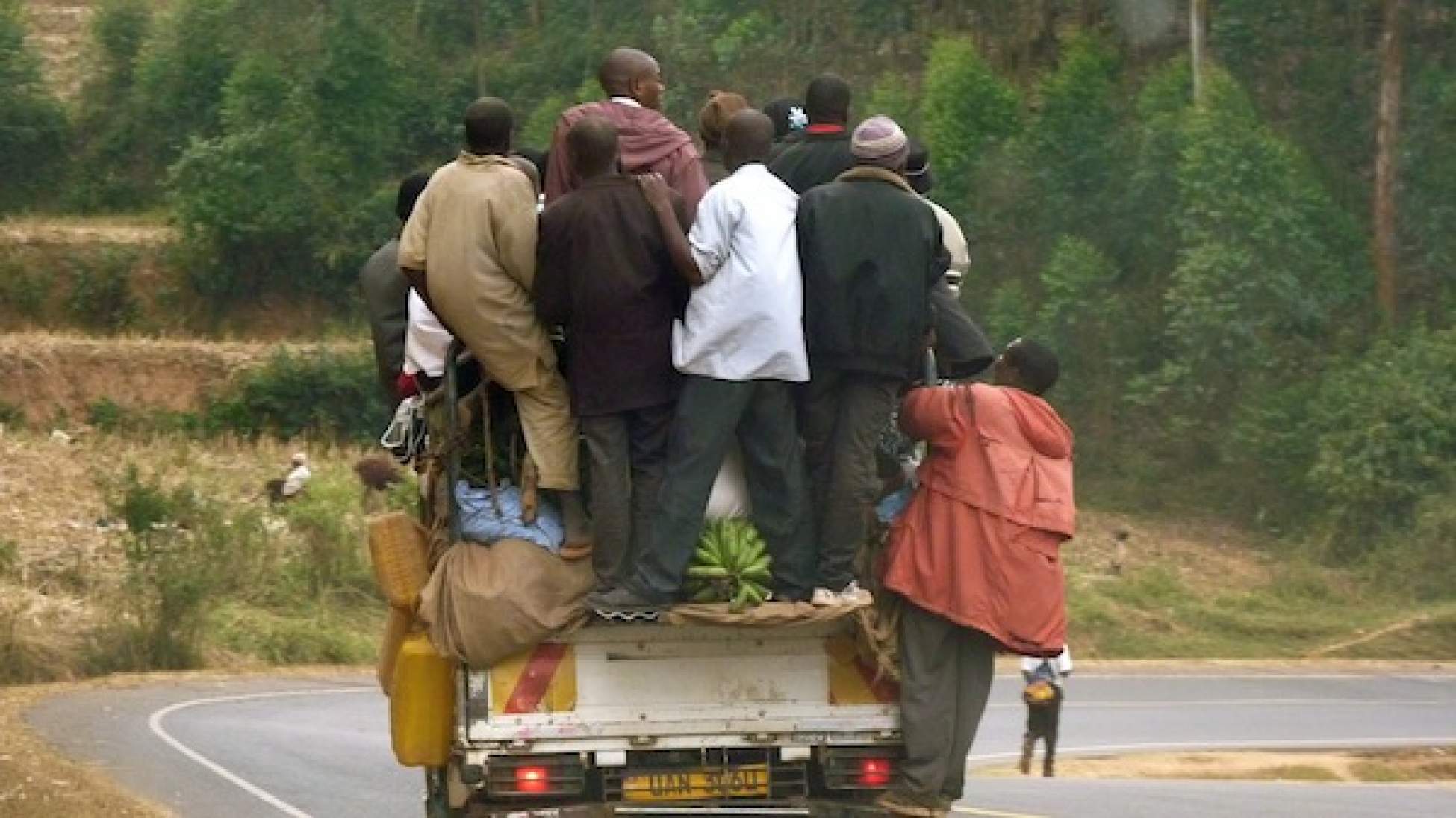 Trina contemplates the Rwandan side of the border; taxis, borders and brioche.

I think that the idea that love can transcend all borders is really nice and all, but there are just some things that can’t (and shouldn’t) move across borders.

Take the Ugandan taxi. If you were new to Uganda, you’d never be able to identify the taxi as a taxi. You’d see a four-door sedan stuffed with more Ugandans than seatbelts, loaded down with the weight of mattresses, matooke (plantain), suitcases, and live chickens tied together at the feet, hanging upside down from the back bumper.

You’d think, okay, a family must be moving. You’d never think the supposed moving vehicle (or poultry mobile) was a taxi—because it would be crazy to think people actually pay money to join the circus. As it turns out, that’s exactly what people do here.

It’s a 15-kilometre drive from Kabale, my dusty hometown, to the Rwandan border. Along the skinny stretch of beat-up highway, there’s no Ugandan traffic police to be seen. That’s probably a good (if not “prearranged”) thing because the Ugandan drivers stuff people into their taxis the same way I stuff clothing into my travel backpack. It’s so bad that even the driver sacrifices half of his seat to another passenger and shifts his body halfway out the window to drive the taxi.

Two thousand Ugandan shillings (less than $1 CDN) gets me from Kabale to the Rwandan border in no time flat—save that the taxi doesn’t get an actual flat.

The classic Ugandan taxi represents everything Uganda is: resourceful to the point of bring risky, noisy, chaotic and full of camaraderie (a forced version, anyhow, as I’m perched awkwardly on the lap of a Catholic father who loudly asks me, “Muzungu, where are you from?” “The farthest place from here!” I want to shout back in his face).

On the other side of the border, however, it’s a completely different story.

“Nice time,” I wave goodbye to the Catholic father (with utter relief) as I practically fall off his lap while trying to make room people to exit the taxi. Soon my passport is stamped and the Ugandan taxi becomes a Rwandan taxi and we’re driving away on the right-hand side of the road—the opposite of Uganda’s road rules. Outside my window, the tea leaves are green and shiny and rolling like an ocean.

“From a distance,” croons Bette Midler’s voice from the front speakers, “the world looks blue and green.” And she’s right, she’s so right, as the air releases from my lungs, letting go of all the tension I had been holding onto on the other side of the border. I don’t miss the Ugandan taxi. Not at all.

The Rwandan taxi and the newly paved roads and the passengers all wearing their seatbelts and the driver not risking to drive faster than the speed limit represents everything Uganda is not: cautiously reserved, rule abiding, and (thankfully) quiet.

My Ugandan friends joke that everything in Rwanda is regulated by the government, right down to the choice of shoes on your feet. It’s a half-truth because the current government is known for making rules that, unlike Uganda’s malleable system, are not meant to be broken. Rwanda is much more “by the book” than Uganda.

Plastic bags are outlawed. Littering is a criminal offense. Land was meant to be tilled, not sit idle, and the same goes for construction projects (whereas Uganda’s landscape is filled with half-finished projects and permanent scaffolding).

As the taxi moves inside the capital city of Kigali, I want to clasp my hands together and titter like a schoolgirl on a fieldtrip away from her one-paved road hometown.

“Oh, look at the street lights!”

Later that day, a fellow traveler leads me to a Canadian oasis on the expansive African desert of white bread. A cute café and bakery called Brioche. A smile rips across my face.

You know that moment when you didn’t realize how much you missed someone and you see them again for the first time? Yeah, that’s exactly how I felt when I saw freshly baked whole wheat bread again.

Kigali couldn’t seem to get any better for me. I felt as though I was a million miles away from Uganda. No one shouted at me from across the road, “Hey, Muzungu!” Nope, not in Kigali, where Western expats and NGO interns and business people lived and worked and walked the streets and bought loaves of whole wheat bread in large numbers.

At Brioche, I felt as though I had never left Canada at all. But as I sipped on my espresso, I began to feel like a traitor to Uganda. Here I was, romanticizing this particular neighbourhood in Kigali (that obviously looked a lot differently than, say, the poorest neighbourhood) and loving it for everything that Uganda was not. I wondered: would I do the same if I were at home in Canada now? Would I be relieved to sip on an espresso and butter a piece of hot whole wheat bread? Maybe. But maybe not. More than likely, knowing and feeling how far away I was from Uganda, I’d miss the noise, the tension, and the unpredictability of the place.

I wouldn’t miss the white bread, but I’d miss the company of those I shared it with. I’d miss the feeling of somehow, despite all odds against me, finding my own place, my own order, within the chaos of a new kind of home. Suddenly, I longed for Uganda again.

I guess I’m circus freak, after all.