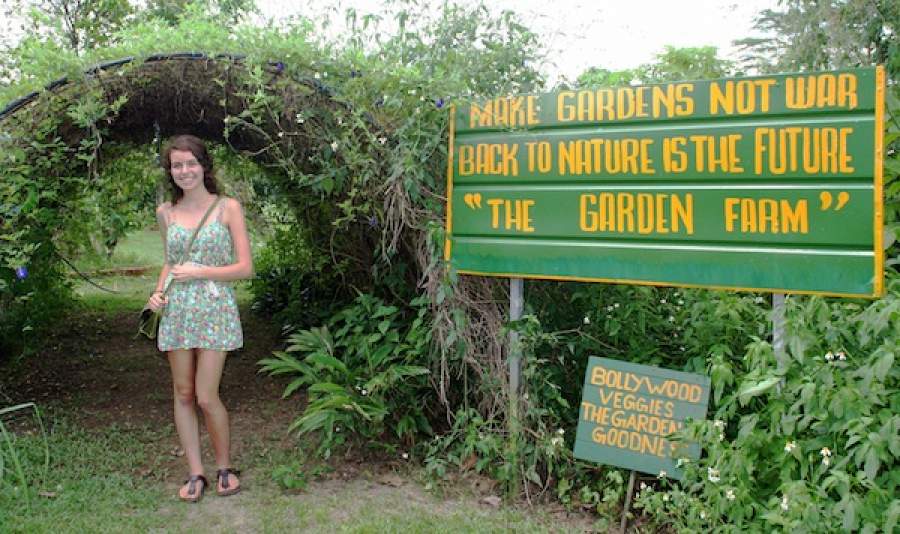 Judi is inspired by farming intiatives in the island-state.

With a population of over five million spread across a country of only 710 square kilometres of total area (making it the third most densely populated country on the planet), Singapore doesn’t exactly have the same farming potential as Canada (to say the least). However, that hasn’t stopped the small island country from trying to foster an agricultural industry.

In recent years, the Singaporean government has invested in climate change research, and in 2007, their Climate Change Study found that if climate change continues as projected, Singapore is vulnerable to face serious repercussions in terms of: public heath (from haze, smog and mosquitos), significant losses of greenery and biodiversity, flooding and erosion of coastal areas and a greater need for energy to be used for cooling (which will only increase green house gas emissions, therefore accelerating climate change further).

The government has put forth several initiatives to combat climate change, and one of these is to increase the nation’s self-sustainability. This has led to projects such as NEWater, where rainwater (of which Singapore, as a country which exists in a tropical rainforest climate, receives a lot of) is collected through a large-scale local catchment, filtered using advanced membrane technologies and UV disinfection and converted into drinking water.

Another interesting initiative is the increased emphasis on Singapore’s farmland. Although the vast majority of Singapore’s land is used for urban development, the northern Kranji area is still kept for rural use. Since land is a hot commodity in Singapore, the Kranji Countryside Association was developed in 2005 to ensure the farms remained profitable enough to continue their operations. As such, they made it their objective to promote food production as well as education, recreation, conservation and eco-tourism. This means that many of the farms produce cash crops like koi fish, where a single Showa Koi sells for 13,000SGD (about 10,500CAD), or, like the D’Kranji Farm Resort, act as meeting and banquet venues for local and international companies.

A third technique, offered by Bollywood Veggies, is to allow tourists the opportunity to tour their food museum and organic gardens and sample (and even cook) some of their fresh produce at the on-site restaurant. Since many Singaporeans eat out for a good portion of their meals, the restaurant’s ultra-fresh theme has gone over quite successfully, with weekend bookings often filling up with reservations from large groups. In addition to the farm’s environmental sustainability efforts, they have also recently focused on improving their social sustainability as well, in hiring mentally and physically challenged workers.

While Bollywood Veggies offers an attractive small-scale, personable service, farms of that nature aren’t enough to sustain the entire country. To solve the issue of how to feed skyscrapers filled with people using only limited space, Jack Ng of Sky Greens created a skyscraper of his own, but for crops. Instead of planting his bok choy in the ground like a traditional farmer, Jack uses vertical planters to house his crops. The planters rotate like a Ferris wheel, allowing each row of plants to pass through a water trough every eight hours. Although crops grown in this fashion are slightly more expensive than those grown using traditional means, many Singaporeans have been willing to take the cost increase, as the nation’s high patriotism is quite supportive of locally produced goods. According to Sky Farms, if farms of this nature continue to expand, Singapore can go from its current level of 7 per cent of its greens being domestically produced to 50 per cent.

Altogether, Singapore’s countryside may not provide a traditional rustic atmosphere usually associated with farmland, but it might just be setting the tone for a new international era in rural development.