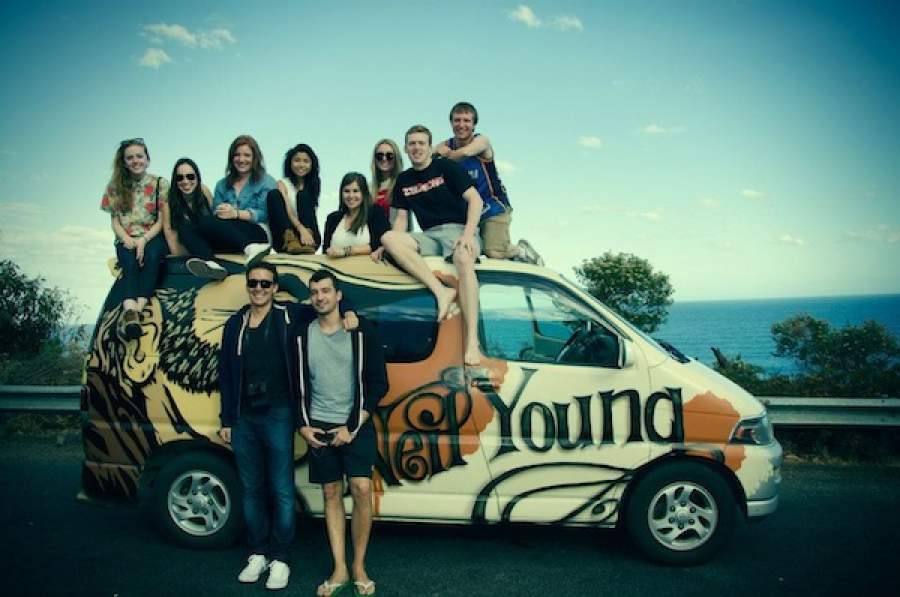 “You’re driving in the bike lane.”

“Oh, I thought you saw a kangaroo.”

You’re driving down the highway and the road curves like the white tip of a wave. The van you’re in with four of your new friends is coasting merrily along, someone’s iPod is blaring ‘90s pop hits through the crackly speakers. Outside, the blue sea is far below you, glittering just like you knew it would.

You pull over to take some pictures because it’s just so postcard-like that you stop worrying about becoming the exchange-kid cliché of renting a van. You take tons of snaps in front of the Pacific ocean with your Ray-Bans on and just allow yourself the luxury of submitting.

Lovely, just lovely. The pictures are beautiful, the eight DSLRS that are distributed amongst your 10 pals doesn’t even seem excessive—you’re roughing it, you’re camping in a van! Your pictures are allowed to be luxurious!

You climb over all of the necessary crap you’ve jammed into the backspace of the van to continue on to the elusive campsite, but the other van in your cavalcade isn’t turning on. The boys try to get it going by yanking and pulling. . .the parking break is disengaged? Calling the van rental company isn’t much help either, the Aussie on the other end of the line just dismisses your dilemma and instructs you: “Happens all the time, just give it a good yank.” And hangs up.

Eventually you leave the other van to figure it out, and your van and its human contents are going to seek out the evening’s patch of grass.

Welcome to the GREAT OCEAN ROAD TRIP! Like any good road trip it was full of: undercooked camp meals, running out of supplies, forgotten flashlights, lots of getting lost and don’t forget—ridiculous and hilarious-in-retrospect memories.

Along with the key elements aforementioned, this road trip had some specifically Australia-only experiences that are worth noting. Firstly, when you’re “down-under,” everything is opposite (not really, but kind of) including the driving. Luckily we didn’t get into too much trouble with this learning curve, but at some points it was particularly nerve-wracking (reminding the driver it was the left lane they wanted to be in when making a turn, staying out of bike lanes and navigating that GOR highway with its tricky mountain turns). If we had planned a little better we would have made it further on the first night and not arrived to our campsite in the dark, cold and trying to feed 10 people on roo-burgers cooked on a 12” by 12” propane-fired hot plate. But the burgers were delicious. I think we were pretty hungry too, which always helps!

The next day, we left behind the small, cute surf towns of Torquay, Apollo Bay and Lorne and went out to our objective: the Twelve Apostles. The Twelve Apostles are beautiful rock formations that have formed along a section of the coast and are the turn-back point to most Great Ocean Road itineraries. We were lucky enough to get there at sunset and it was very beautiful (more pictures by the thousands were necessary).

The second night we spent at a much better campsite, we paid $6 a head for this one and a bit more for firewood, but it was worth it! We made pasta this night, but the highlight of the meal was definitely the Tim-Tams (chocolate biscuits native to Australia) and Goon (the cheapest alcohol in Australia coming in the classiest receptacle: a four-litre bag—yes, bag—which, will set you back around $10). We shared the large field where we camped with a ton of kangaroos (which were quiet scary-looking I find) and a few post-shower rainbows. Needless to say, the quiet fields filled with mobs of kangaroos and the rainbows were my favourite part of the whole trip, but even the adorably shoddy van (somehow we got one decorated with a Neil Young painting on the side—did they know we were Canadians?), the less-than-obsessed time-management and the “seriously-no-one-has-a-flash-light?” problems were all part of the fun.

Having gone on an extensive cross-country roadtrip in Canada and the USA last summer where we saw a ton of things, this one was very short and with a lot more people and slightly more haphazard in comparison. But maybe that’s the best way to do it in Aus: laid-back, sippin’ on Goon with a crew of buddies, some tunes and not much of a plan.