You are here: Home/ Articles/ Beyond the Guidebook/ Backdoor Britain 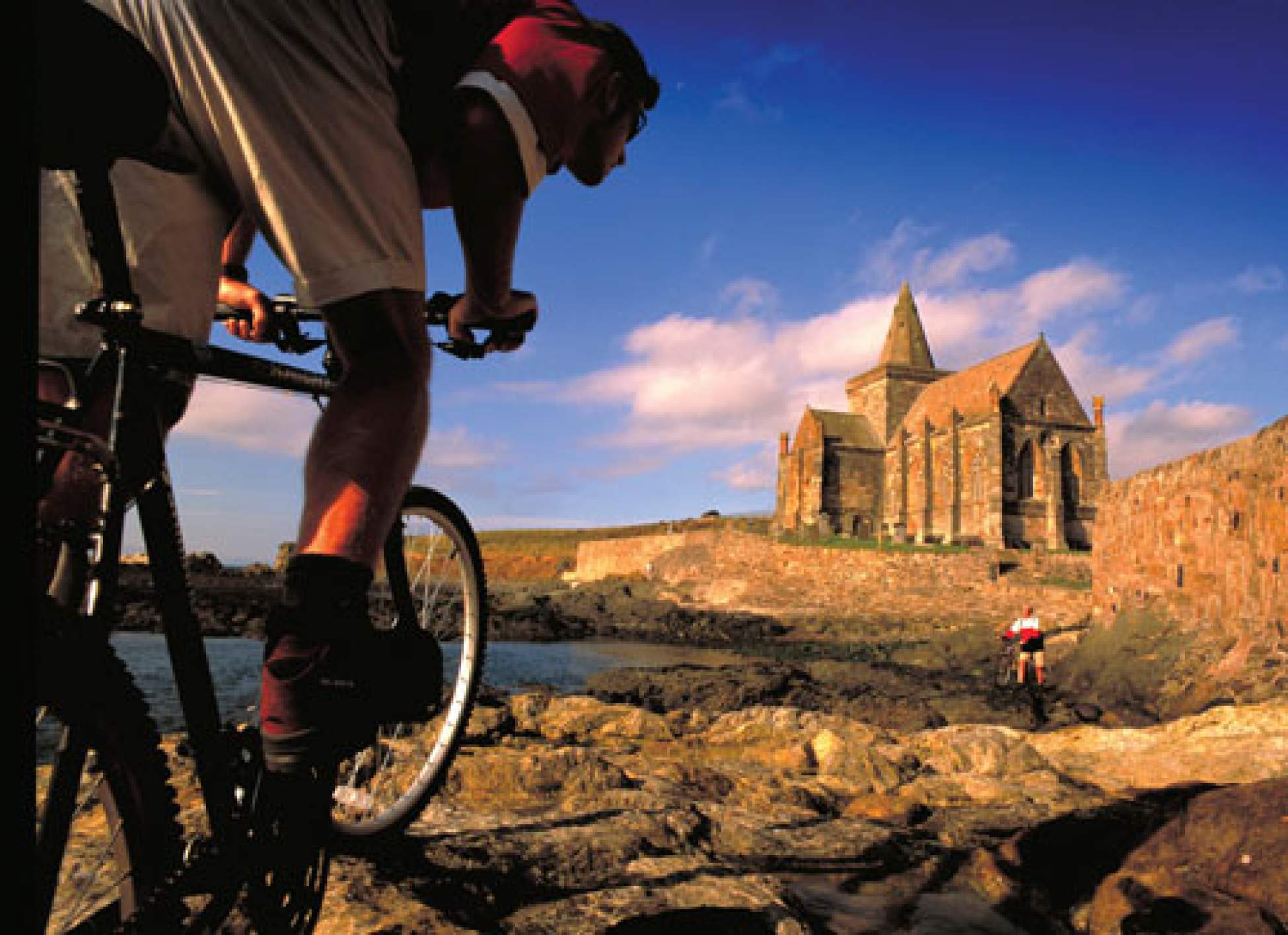 These days, the UK is full of visitors and with the upcoming London Olympics it's only going to get worse. Learn how to see the best the UK has to offer, while avoiding the crowds and making those loonies last.

There's no doubt, word is already out. Thirty million people visited Britain last year—equivalent to half of the country's population. But it is still possible to beat the crowds... beyond your towers of London and castles of Edinburgh, there are parts of ‘hidden' parts of Britain that I want to introduce you. Places I've grown up with that not only what make the country what it is today, but which most visitors never get to see.

Top of the list is Belfast. Broadcaster and DJ Sarah Cox once said: "If you haven't had a night out in Belfast, you haven't lived." This is a city living on the edge; the vitality is palpable. While it is still possible to see tanks roaming the streets, the unrest of the last four hundred years hasn't been all bad. It is, arguably, the source of a resilience and drive in the community that has inspired a continually thriving cultural scene. A focal point for this is the annual Belfast Festival, held every October, but independent bands like Snow Patrol have had a real impact, kick-starting a music revival right across Britain.

Snow may not be one of the country's biggest draws but did you know that Britain sports some of the oldest, most breathtaking mountains in the world? Millions of years ago, the Highlands of Scotland towered as high as today's Himalayas; today the knotted remains of their crags test even the hardiest mountaineers. Don't leave Canada for the ski scene here—the best of British skiing can be found near Aviemore, and the town itself is so ugly it deserves an award. But nearby Glenmore Forest is exceptional, and the nearby National Outdoor Training Centre offers everything from white water kayaking to avalanche awareness in supreme surroundings.

A natural draw for many people coming back to Britain is to trace their own roots and for Canadians, this journey often takes them to the wind-battered Orkney Islands in Scotland. In the 1700s, the Hudson Bay Company recruited thousands of Orcadians, as they are known, to work in the fur trade. Descendents of these migrants are starting to drift back to visit this beautiful place—which also hosts some of the oldest, most mysterious places of worship in the world. The Ring of Brodgar, for example, was originally a perfect circle of 60 stones that is estimated to have taken over 80,000 man-hours to construct. Its true meaning is still unknown.

Although some Stone Age sites on the Orkneys are becoming so popular they are now cordoned off to prevent them from further erosion, there are other opportunities to get up close and personal to pagan history. Ilkley in Yorkshire, for example, offers phenomenal views across the moors from the Twelve Apostles; or visit the Derbyshire Dales, near Sheffield, where the enigmatic Nine Ladies reside.

From ancient to hyper-modern, Cornwall in Southwest England boasts the world's largest greenhouse. Doesn't sound like much? The 35-acre Eden Project is a signpost to a sustainable future, designed to be completely waste neutral. Examining the ways in which humans interact with the world, the Eden Project combines glass-covered tropical rainforests with thought provoking, interactive arts and music displays.

In contrast, Wales is home to some of Britain's wildest, and rarest, native nature. Amazingly, a quarter of the entire country has been designated an "Area of Outstanding Natural Beauty"—though some National Parks like Snowdonia are becoming victims of their own success. Locals prefer quieter areas like Pembrokeshire, where you will find Shore Dock, one of the rarest plants in the world, and the Red Kite, a magnificent bird of prey saved from extinction in Britain by a troupe of local farmers.

For something completely different, however, take a boat to Anglesey—another of the Britsh ‘Isles'. This was the Celts' last refuge against the Romans. Its richness and fertility has endowed it with the local name Mam Cymru, or Mother of Wales ; the unique organic spirals of the neolithic stone artwork at Barclodiad y Gawres are unmatched in beauty.

Wales is also home to my favourite campsite: Shell Island. This place is so isolated it is actually a rule that you cannot pitch a tent within 20 metres of another camper! There is no better answer to the big city. Cut off by a causeway, you can only access the campsite at certain times of day, leaving you in perfect peace. And why the name? Shell Island is home to 200 kinds of sea shell.

There's a place in London that is actually home to 200 kinds of fish. Billingsgate Market has been operating since 1327, when King Edward III prohibited any rival markets to be set up within 6.6 miles of the city. Its royal favour has served it well and, even today, Billingsgate remains Britain's premier seafood supplier to haute cuisine as well as hardy fish-and-chips fryers. It is a fascinating slice of east end London life which erupts into a pandemonium of buying and selling as early as four o'clock every morning. It is not the only unsung market of London, either. While you may have heard of nearby Spittalfields, or Portobello Road, have you ever come across the stunning flower market of Columbia Road? If you are in London on a Sunday morning, don't miss it. On the greyest of days, it is guaranteed to brighten you up.

Like London, the east end of Glasgow is home to some of the country's hottest night time venues. Since being awarded the much prized ‘European Capital of Culture' title in 1990, Scotland's largest city has been on the up and up. One of the driving forces behind the scene today is a venue known as The Arches. Resembling a sprawling wine cellar, it hosts everything from conceptual art and performance to the latest gigs from touring bands. Its artistic integrity is so well regarded that the not-for-profit venue even receives funding from the Scottish Arts Council. If you ever arrive in the city by rail through Central Station, be sure to head below to check out life in The Arches for yourself.

Another world class product of Scottish cellars is, of course, whisky. With the first recorded sales occurring in 1494, worldwide sales of Scotch whisky today count at 30 bottles a second. Widely regarded as the best in the world, scotch was traditionally described as the ‘water of life', or usige beatha, in Gaelic. But despite the popularity of Scottish distilleries, the region is not in fact home to the world's oldest. For this, we must look back to Northern Ireland.

Bushmills has been producing whiskey (under the Irish spelling) since 1608 and in that time has perfected the art—or so I'm told! A visit to the North Antrim Coast will also put you in touch with Northern Ireland's World Heritage Giant's Causeway, just down the road. Its 40,000 hexagonal basalt columns are the stuff of legend. Fifty-five million years old, it is said they were created during a seismic confrontation between local giant Finn MacCool and his Scottish adversary Benandonner. During the battle, Finn tore up a bridge linking their two coastlines, leaving behind what we see today—a mosaic of rock stretching out into the treacherous ocean. But this stretch of rock is now caught up in a battle between two very modern adversaries: development and conservation. UNESCO has threatened that if action to preserve it is not taken soon, the causeway could face losing its World Heritage status.

A lesser known fact about Country Antrim is that it was the birthplace of the United Kingdom itself. Keen to hold on to the region, the British Government sent Protestant land owners over for generations, but during the nineteenth century their abuses had the unwanted effect of actually uniting local Catholics and Protestants against them. To put an end to it, the British simply dissolved the Irish government and created the new ‘United Kingdom of Great Britain and Northern Ireland' that we know today. You can experience the distinction between Northern Ireland's two cultures along the breathtaking coastal road between the Catholic Cushendun and Protestant Larne. The road is one of the most scenic in Europe and the only one in Britain strapped so perilously to the coastline!

From political oppression to rural freedom, if you're into hiking, Britain is one of the few countries in the world where you are not restricted to national parks. A curious quirk of history resulted in a wonderful thing called the ‘public right of way', which allows walkers access to thousands of miles of footpaths and bridleways on private estates (much to Madonna's annoyance in her new Scottish country home). In Northern England, there is a route you can follow from coast to coast. In 122 AD, the Roman Emperor Hadrian came to Britain to find a solution to the increasingly threatening attacks of the Picts and Celts from Scotland. To shore up Rome's northerly border, he decided to build a wall stretching 76 miles from the Tyne in the east to the Solway Firth in the west—right across England. Today you can follow a route along the length of Hadrian's Wall, as it is known, with camping available in barns and Youth Hostels along the way. If you can't spare the six days needed to complete it all, you can enjoy the best preserved sections on a 16-mile section between Chollerford and Haltwhistle.

Sticking with walls—and this is something you'll need to be good at if you want to see this piece of hidden Britain—rock climbing will take you to some of the country's best, and least accessible, places. The unpinned routes across Britain have trained some of the world's best climbers; from Chris Bonnington right back to George Leigh Mallory, one of the first men to attempt Everest back in the 1920s. The Cuillins of the Isle of Skye are well worth getting to grips with—if only for the drive there—but for something a little more off-beat, the new routes cropping up on the Channel Island of Jersey are awesome. Not only will you get to enjoy the 50-metre Pinnacle, but also a climate that sees summer temperatures consistently rise to the mid twenties (Celsius). You won't even know you're in Britain!

Speaking of fairer climes, one thing the Gulf Stream has brought to the UK's south coast is surfing. Honestly! It's a big thing. Britain now has around 250,000 surfers and (according to us at least) some of the best breaks in Europe. Cornwall is the sport's spiritual home, blessed not only with a diverse crowd but a powerful swell from low pressure systems rising deep from the Atlantic. Pack a dry suit, head north, and you're in for a real treat—Thurso in Scotland is known as the best right hand reef break in Europe. Ride it far enough and you might even be able to visit relatives on the Orkneys, just across the Pentland Firth.

Wherever you go in Britain though, bring a tent! It is not the cheapest place to travel and anything you can do to save a few pounds (of the monetary variety) will really help. It doesn't even rain that much here anymore…