You are here: Home/ Articles/ Volunteer Abroad/ Articles/ It's for You: A Firsthand Tale of Volunteering in Costa Rica

It's for You: A Firsthand Tale of Volunteering in Costa Rica 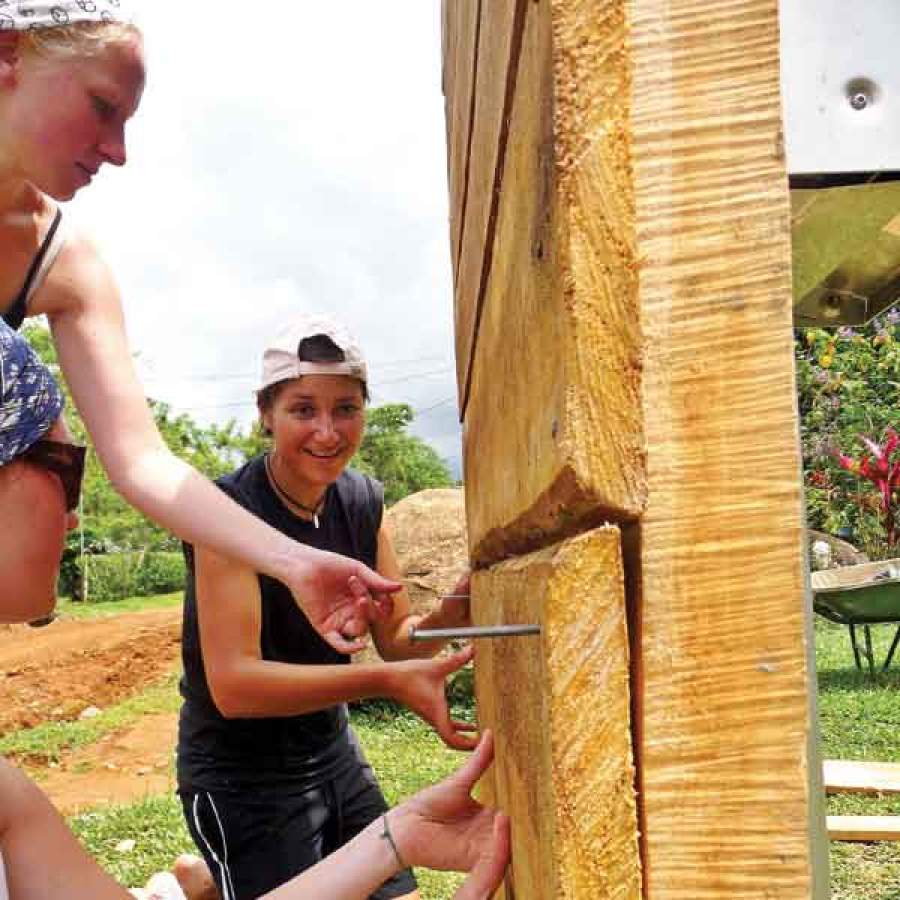 A brief volunteer stint parallels all the challenges and joys of development work.

The cooperative community of Finca Sonador is a 20-minute hike up red mud roads from the Interamericana Highway in the southern Pacific region—well off the beaten track in Costa Rica. Yet many Europeans come to this mixed village of Ticos (Costa Ricans) and Salvadorians to conduct research and do volunteer work.

Cristina, Melanie and Conney are architecture students from Munich, here on an exchange set up by their professor, to learn about construction and development work. The air is infused with the sweet smell of freshly-turned earth as they walk through the village for the first time, noticing the hand-built houses.

After a rough sleep at their homestay—punctuated by rooster calls—and a steaming breakfast of rice and beans, the women start the hunt for their local contact. They’ve been receiving weekly emails from Anton, a young Austrian volunteer, ever since their professor found him online. Picking their way up the rocky dirt road, dodging motorbikes, horses, and cattle, they finally meet him face to face.

Anton is full of ideas. As he leads them through the wild greenery along the Sonador River, he tells them about the community’s many needs. The women's group wants a structure for processing jams. The children need indoor spaces to meet and play. There's been talk of building a roof over the pay phone, since the only point of contact with the outside world is entirely exposed to the elements. A phone booth could be built with minimal resources in only a few days.

The architects begin drawing complicated sketches of phone booths while drinking from steaming mugs of sweet Costa Rican coffee. That afternoon, they show their drawings to Edith, head of the local ad hoc tourist committee. “We believe,” says Cristina, “that what you need is a phone booth.”

A laboured silence descends over Edith’s kitchen. Edith, they learn, is close friends with members of the women's group. Changing the subject, she tells stories about leaving El Salvador as a refugee, and feeds them sweet roasted pumpkin.

The next morning, neighbours hear that plans are stalled. Nobody cares if the women's group has jellies to sell, they say; they want to be able to talk on the phone without an umbrella. “Talk to Eino,” the locals advise.

Eino, the manager of a small Swiss coffee export business, is a hands-on guy with small, bright blue eyes and a truncated finger on his right hand. His clothes are stained with honey from the coffee berries. He offers concrete for the footings, wood and metal for the roof, and hammers and nails.

They show their drawings to Edith, head of the local ad hoc tourist committee. “We believe,” says Cristina, “that what you need is a phone booth.”

That afternoon, work starts on concrete footings, just as the rain begins to pour. Locals gather to watch the women labouring under thin sheets of plastic and swearing softly in German.

“Didn't you know,” asks one of the bystanders, “that it always rains in the afternoon?”

After a daytrip into town to buy a saw, woodworking begins. Martin, an experienced local homesteader, stops to watch the struggle. With a smile, he shoulders the women out of the way, but finds himself struggling with the saw as well. “Bruto,” he mutters, and wanders off.

Twenty minutes later he returns with a handful of carpenters and a saw of his own. He curses the women’s city-bought tool and begins to work with experienced ease. Soon, the architecture team is relegated to a management position and the project is transformed into a social event. Half the village shows up to drink Coca-Cola, laugh, and admire the new roof over the pay phone.