You are here: Home/ Articles/ Volunteer Abroad/ Articles/ Taking the Show on the Road

Taking the Show on the Road 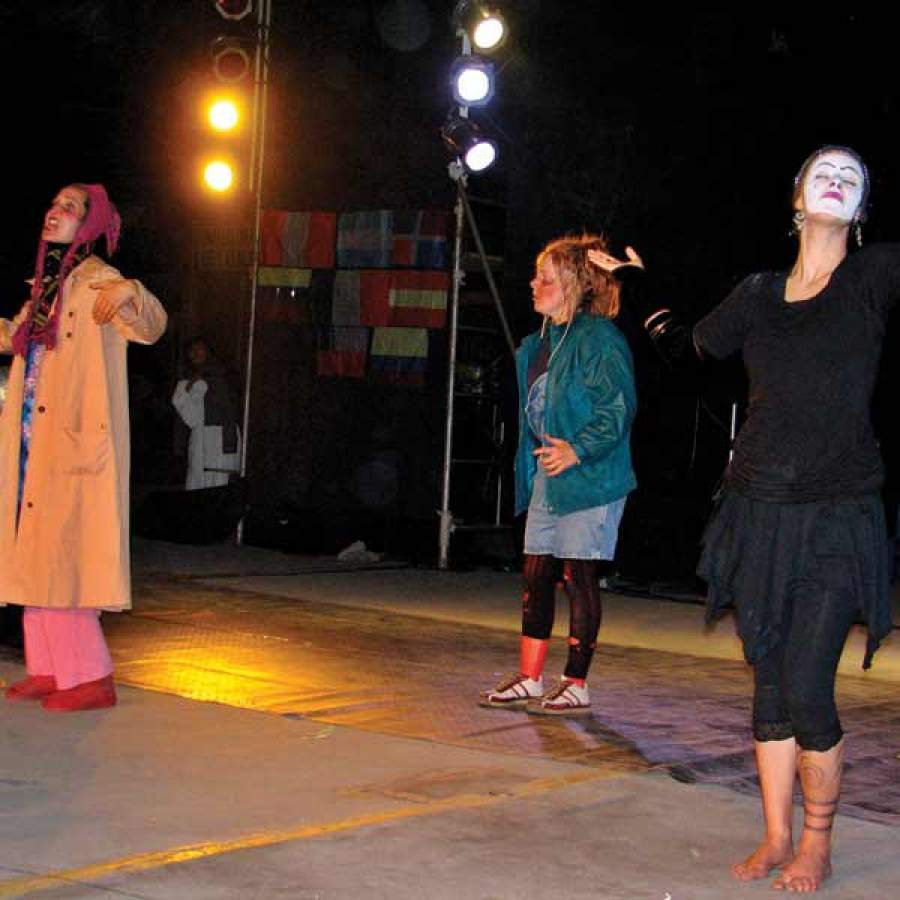 Wearing scarves, winter coats and boots—and with a wooden sleigh in tow—three Canadian womenprepare to perform a play. Their costumes fit the theme:  after all, the story takes place in a bitter Montreal winter and centers around two homeless women making their way in the cold. But at this performance the three members of the Quebec-based theatre group Les Vidanges En Cavale (loosely translated as “Garbage on the run”) aren’t comfortable in their heavy winter gear. In fact, they’re sweating their butts off.

That’s because the trio’s not performing in their home province—they're in the sweltering heat of the Peruvian rainforest. The location: a small youth shelter in Iquitos, a city that cannot even be reached by roads. During the performance, the doors are kept open for passersby to see, and for many of the locals watching, this is the first play they’ve ever seen.

“They were speechless.  They were looking at us as we were sweating like pigs,” recounts 30-year-old Onira Lussier from Quebec City, one of the founders of the theatre group who is studying to be a drama teacher at Université du Québec à Montréal (UQAM). She laughs as she tells the story, but it’s clear the experience was unique—for her and the local audiences.

“The play talks about the cold in the street in Montreal and how some people are dying in the cold. And they don’t know that over there. They don’t know that poor people exist [in Canada]. So the reaction of the people was very interesting.”

This performance was part of the group's two-month Peruvian tour, starting last May in the capital of Lima, then continuing on to Iquitos. Performing their play was only a part of what this tour was about. For Lussier, and her colleagues—Marie Deaudelin and Yamie Tremblay—it was more about interacting with local youth through drama and social workshops and, ultimately, trying to make a difference in the communities they were visiting.

Deaudelin and Tremblay—students of drama education and human relations respectively—had been to Peru before. Both had gone as volunteers with Solidarité, Union, Coopération (SUCO), where they taught performing arts to disadvantaged children in Comas, a poor district on the northern edge of Lima. The goal of the project was not only to entertain the children but also to work on their self esteem and social integration—and hopefully, over the long-term, increase social participation and reduce future delinquency. Not an easy job, but an important first step in a district where more than 80 percent of families are struggling with low incomes.

Deaudelin and Tremblay knew they had made an important contribution with their work in Comas, but they felt there was more that could be done. They had made valuable contacts while they were there, and had been invited to come back and perform in a street arts festival the following year—an invitation that would later spark the idea for their theatre group.

For many of the locals watching, this is the first play they’ve ever seen.

After their return to Canada, Deaudelin—who studies drama education with Lussier—approached her casually with the idea of heading to Peru, and little by little their plan became reality. They established the theatre group in June 2007 and Tremblay joined that September. They managed to get the university on their side and had the project accredited by the drama department. The director of the drama department was so supportive he even directed part of the play they were putting together.

For funding they appealed to the Office Québec-Amériques pour la Jeunesse (OQAJ) with a proposal that included letters from various Peruvian organizations willing to host them. Here they secured funds for 70 percent of their plane tickets. They also put together a benefit night in Montreal where they performed and sold food they'd made themselves, with all the proceeds going towards the trip. But Lussier says that even with all their efforts, finances were tight and they didn’t know if they’d manage it until the last minute. “At the end, finally, two or three weeks before we had our tickets booked, we knew we could go,” says Lussier. “So there was a lot of suspense!”

The trio flew into Lima in early May 2008, spending two and half weeks in the district of Via El Salvador followed by a week and a half in Comas—where Deaudelin and Tremblay had worked the previous year.   At their first location a drama director welcomed them and found them a place to stay with a local family while they worked at La Casa Cultural de Via El Salvador.   Their arrangements were similar in Comas. In  Iquitos they did daily workshops at a local youth centre, called La Restinga for two weeks in exchange for room and board at the home of the centre’s psychologist.

The Lima debut of their Montreal-themed play surprised them. A local drama director booked them for the gig but didn't supply any details. “He told us you’re going to perform on the 17th of May," says Lussier, "but we didn’t know for what. And when we arrived, we were like, ‘Oh my God, it’s like a big event!’” The big event was a political summit called La Cumbre de Los Pueblos (The Summit of the Villages) with an audience of more than 250 people. They performed in a tent in front of the highway and it was a success. “I’m sure they missed half of the text because of the [noise of the] highway, but the people just loved it. And at the end they took pictures with us and signatures and it was like we were stars.”

Each performance was different. Lussier describes one in a hospital. “In the story, one of the two women is schizophrenic; her ghost plays a role in the play too. So we were doing the play in front of doors that said ‘Therapy Room’. And that’s the subject of the play!”

In Iquitos, the fact that we were three women was a very strong image.

Despite the success they had as performers in Peru, the biggest impact they had on their tour was no doubt with the workshops they held for youth both in Lima and in Iquitos.   In all the districts they visited, youth are dealing with difficult circumstances like poverty, family violence, alcoholism and crime. Iquitos is a haven for sexual trafficking, according to Lussier. “There are a lot of young people in the streets, and they don’t know what to do with their lives."

Each workshop was geared toward a different age group and the development of a new ability, but they were all designed to work on life skills like confidence building, communication and team building. The workshops went a long way in keeping kids off the streets and actively engaged. In one drama workshop, for example, the trio would start a performance and a participant could join in the play by clapping their hands. The participant would then switch places with one of the performers and continue on, changing the story as they went. Lussier says this was particularly successful, in part because it gave the participants a sense of control over the story line. "This kind of drama worked because they could express themselves," says Lussier, “but they could also change things because you can clap your hands and go and just change the pattern.”

In another workshop, the group of participants was divided in two. Each group had to imagine they were a tribe and create unique signals, names and even a rudimentary language to speak and communicate amongst themselves—an incredibly fun and creative process, according to Lussier. Later, one member of each tribe had to visit the other and try to figure out the other’s language and signals, and eventually the two tribes met and tried to come to a mutual understanding.

“They just understand more about what it’s like to be a stranger in a community and how it’s difficult. And for the tribe that is receiving the stranger you have to be welcoming. Between the members of the tribe, they have to be always listening to be able to communicate.”

Lussier was amazed at the reaction that they got to this activity, and how many participants really took it to heart. One participant told her: “It’s amazing when you can’t communicate how you have to be inventive.” Another said to her: “I understand the immigrants who come here.”

Lussier admits that solving deep issues in two weeks of workshops is not a realistic goal. but what she thinks they’ve achieved is to open up their minds to a new perspective.  “These are things they’ve been dealing with all their childhood; I don’t think that in two weeks you can change their lives. But I think that it opened them to another way of looking at their lives, another way of interpreting events in their lives, and opened their minds. And I think in Iquitos, the fact that we were three women was a very strong image.”

Tremblay agrees that drama can be used as a means of social work. “Art can help develop mental and physical health. It stimulates creativity and it’s even a way of building trust and self esteem.” In poor communities, Tremblay says, it gives children a chance to dream and—at least for a short while—escape the difficult conditions around them.

Working in Peru wasn’t always easy for Lussier, Deaudelin and Tremblay. Last-minute changes are part of the cultural landscape, and, with limited phone and internet service, communication was sometimes slow. “Things weren’t moving as fast as here [in Canada]," says Lussier. "We wanted to do so much and sometimes we had to just stop and wait.”

Ultimately the annoyances were offset by pleasant surprises—like at the end of their stay in Iquitos. The group kept a gold book where participants were free to write comments and feedback for the three Canadians. Lussier says they were overwhelmed by what they read. “Each teenager wrote in the gold book. And these are teenagers who barely go to school and don’t like to write. And each teenager wrote and some did paintings in the book. And they wrote moving things like ‘You are three amazing girls who gave joy to my life.’ It was so sweet. This book is now so important to us because it was like a mark of what we did.”

Now that they are back in Canada, the theatre group remains active. Yamie Tremblay has left the group, replaced by Montrealer, Ève-Marie Tremblay. They’ve performed in Quebec City for its 400thcelebration and they’ve also performed for the homeless in Montreal as part of an initiative by ATSA, an organization that uses art as a means for social change. Now the group has their sights set on northern Quebec. They have contacts there and are hoping to tour in spring 2009.