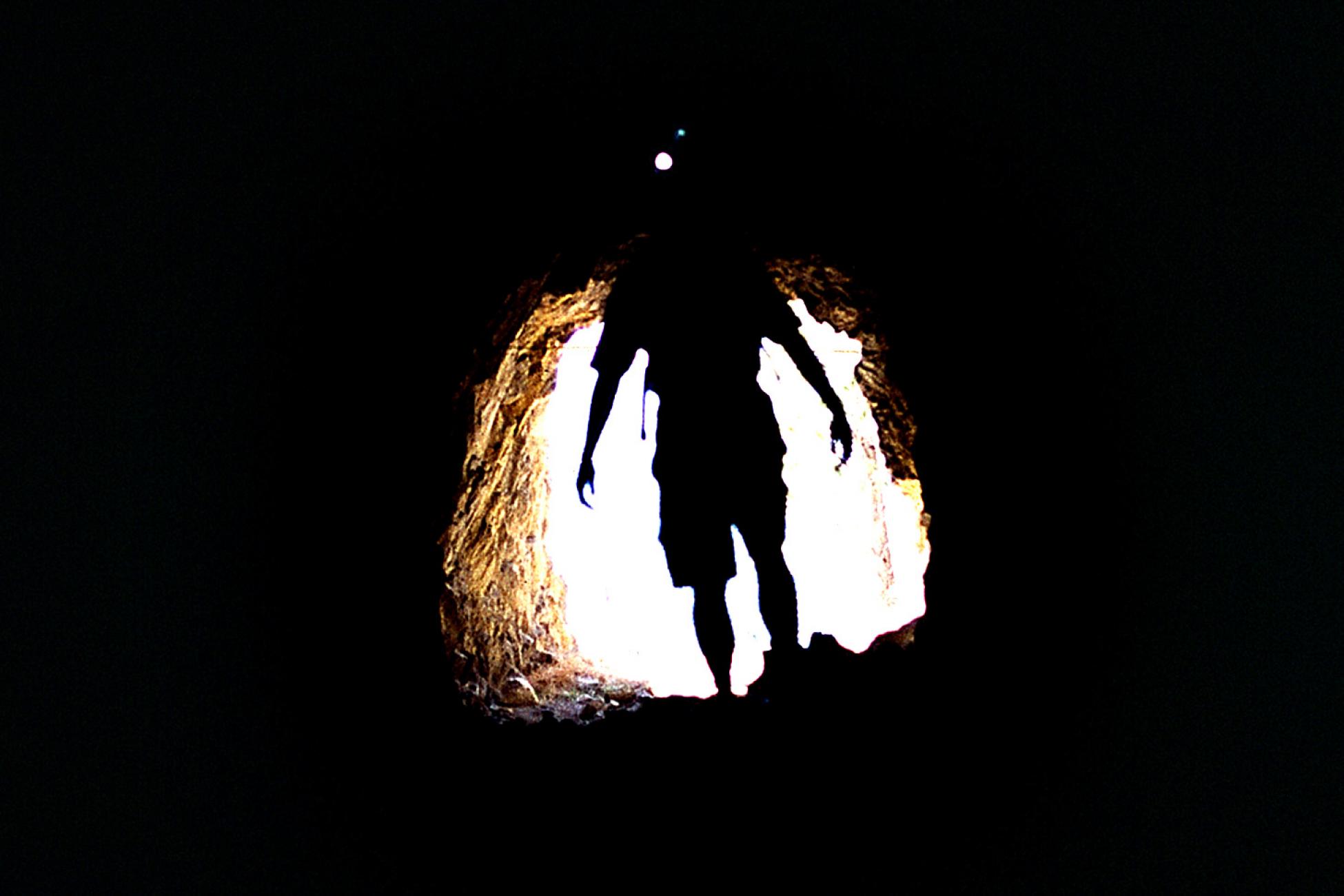 In a developing country, conservation can be a tough sell.

We were at the entrance to Crystal Cave in Belize’s Blue Hole National Park (BHNP).  Isreal 'Junior' Manzenero, a warden, had briefed us in thick Belizean Creole about etiquette in this wild cave.  The low “ooot-doot” cry of a blue-crowned mot-mot drifted down to us from the jungle canopy, while Junior told us to be careful around the Mayan pots and human skull inside the cave.  One of the group, a big high school kid with dark hair and a Miami Heat hat worn sideways, reached into his pack and pulled out a bottle of local liquor and a joint.

Perhaps hushed by peer pressure, Junior watched, then grabbed his pack and led us into the darkness.  There were six of us: five high-school students, whose reward for their volunteer work was a trip through the cave, and me, an intern for the Belize Audubon Society (BAS).  BAS is Belize’s largest land management organization.  Quite something in a country that has set aside 40 percent of its lands for conservation—the highest percentage of all Central American nations.

At the lunch spot in the ceremonial chamber, by the Mayan pots and jewelry, the students passed around the joint and liquor— as well as an ancient pot which was the size of a basketball and as old as recorded time.  Handprints were left on walls and the barely discernable visitor trail was little used.  When I emerged from the cave hours later, my mental image of Belizeans as being conservation-minded was beginning to disassemble.  It wasn’t encouraging, but I hadn’t fully understood that Belize was still a developing nation.  Over the next three months I would become familiar with conservation in a country where one third of the people live beneath the poverty line.

Earlier that morning, I had caught a ride from BAS’s main office in Belize City to the park with June Neal-Sanker, the manager of the Cayo District Parks.  She was a lively woman with a round face, dark hair, dark skin and an honest, guttural laugh that brought a smile to the face of anybody close enough to hear her.

I sat in the passenger seat watching blue herons and great white egrets feed in the waters of roadside canals, as we discussed Belize’s conservation challenges.

“Finances and culture are our biggest problems.  Education is how we attempt to solve them,” June explained.

Financing is an obvious challenge.  BAS’s budget comes from entrance fees, government sponsorship, and grants from international donors—but the amount raised rarely fills the need.  The 575-acre Blue Hole National Park runs on a budget of roughly US $75,000 annually.  By comparison, the 480-acre Oregon Caves National Monument in the US has a budget fifteen times larger.

But low budgets in Belize are commonplace—and not just for the parks, but for local people.  The people, like they’ve done for millennia, often turn to the forest for resources.  Hunting gibnuts (a delicious jungle rat), harvesting roots, and collecting high-value plants to sell are all activities that occur regularly within national parks.

“The forest has always provided for the people.  We’re just trying to adapt the way it provides,” June said, explaining the economic potential of tourism.

As June drove us inland toward the capital of Belmopan (pop.  8000), the humidity dropped and the temperature increased.  When we stopped for gas, I took the chance to check out the city.  In the shade, I saw Latino women mingling amongst the fruits and vegetables on display and a bearded, white Mennonite buying plantain bananas and nails from a Chinese girl.

Another face of Audubon’s challenge surfaced.  In this nation of under 300,000 people, the diversity felt like New York City; and though they live in relative harmony, advocating a unified message of conservation to such a mélange of ethnicities and cultures seemed far from simple.  Many townships off the tourist track still lacked what the tourists take for granted: septic systems, phone lines, jobs.

Back at the truck, I asked June if Belizeans considered conservation a priority.  She looked at me with her head tilted down and her eyes angling out from under eyelids.  It suddenly felt like a stupid question.

“For most Belizeans, conservation means money.  It’s a job—and because of that, it’s a priority.  It’s not a love affair with the land.  It’s a way to survive,” June said.

From Belmopan, we drove for another half hour through increasingly large, steep, forested hills, acres of citrus orchard and the eternal flame of a burning trash heap.  We finally arrived at the jungle-walled entrance of the Blue Hole.

“That’s the warden’s office,” she said.

It was an octagonal cabana with a porch and a hedge of flowering hibiscus behind it.  A stack of machetes rested against the railing of the office, and five high school students lounged around the cabana.  These were the students that I would later go with into Crystal Cave.  They had come to the park as a part of a volunteer program through the local schools.

“They usually do not start with much of an understanding of conservation, but the program gives them a way to learn,” she said.

Community outreach projects are extended from primary to university education and though the overall goal of Audubon is to educate the entire population about conservation, it is the children that provide the most hope for change.

It made sense.  The parks were beautiful.  On our first trip to the cave we watched hummingbirds dancing aggressively between the yellow blooms of Quamwood trees and leafcutter ants blazing paths through the jungle.  Each provided a concrete reason for me, a conservation-minded foreigner, to protect the land.  I hoped the local students shared that perspective.  But what I had come to realize is that in Belize conservation exists because of tourism.  BAS teaches the locals to capitalize on this.  Yet success is linked to both the development of infrastructure, and establishing the idea in the nation’s collective conscious.  It’s another challenging task.

Six weeks after my first trip to the cave, and my meeting with June, I returned to Crystal Cave with a local Mayan guide, Marcos Cucul, and his two Dutch clients.  The day was hot and still.  Across the highway, a man on a four-wheeler sprayed a heavy mist of pesticides on the fruit trees.  I asked Marcos what would happen if the wind shifted toward the park.

"The forest has always provided for the people. We're just trying to adapt the way it provides."

“It kills the vegetation,” he said.  “We’re working to get the citrus companies to agree to spray on days when the wind blows away from the park.  They say, ‘We’ve got a business to run too.’”

Marcos’s knowledge of Belize’s forest is deep-rooted.  He grew up in Belize’s jungles, worked in the forest as a guide for the British army and later began to lead tours for paying foreigners.  Marcos is short and thick, with dark hair and a quiet, serious demeanor.

As we hiked, he identified plants.  “Pacaya chute.” All we could see was a spindly vine that had been cut.  “But this one has been harvested, illegally.”

Marcos removed his pack and pulled out a climbing rope, three helmets and headlamps.  While he distributed the gear he gave us a briefing similar to the one I had heard from Junior.

“Do not touch the walls.  If you do, the mud on your hands will stain them.  We’ll be seeing Mayan artifacts—a skull, pots, arrowheads.  Please do not touch any of these.”  The clients paid close attention and I was struck by the difference between this experience and the one I'd had just weeks earlier with the volunteers.  Not once did I witness these rules broken with Marcos' group.

“Just be careful.  The beauty in these caves takes thousands of years to form and only seconds to destroy,” Marcos said.  I nodded, glad to be hearing and seeing Audubon’s philosophy preached and practiced, hoping it would spread to more Belizeans.